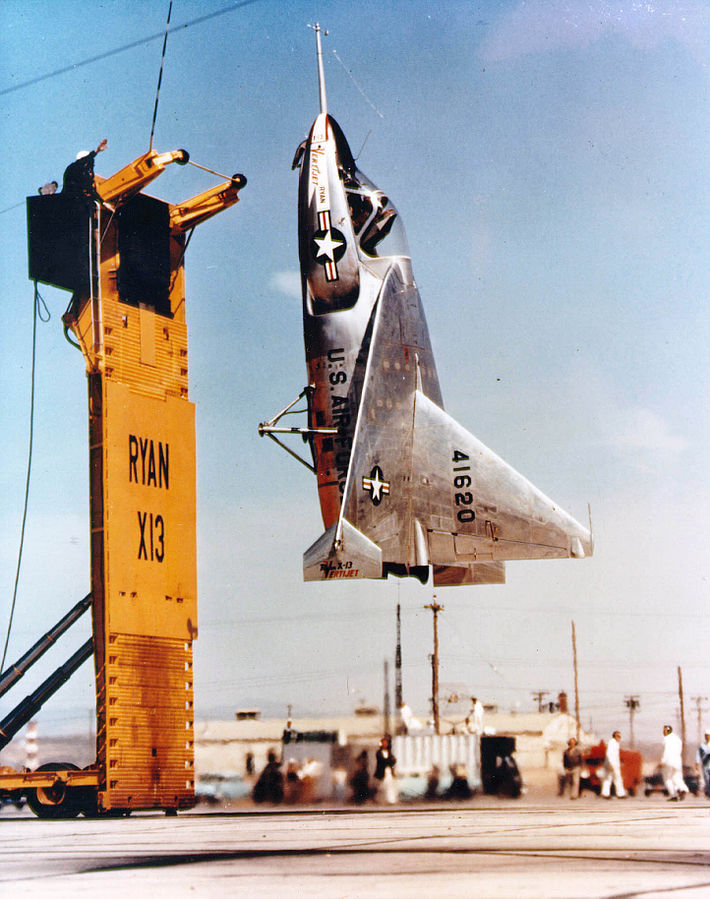 On April 11, 1957, the Ryan X-13 VertiJet completed its first full-cycle flight at Edwards Air Force Base. The Ryan X-13 VertiJet was one of the first experimental vertical take-off and landing (VTOL) aircrafts powered by jet engines. The main objective of the project was to demonstrate the ability of a pure jet to vertically takeoff, hover, transition to horizontal forward flight, and vertically land.

The Ryan Aeronautical Company was founded in 1934. During the 1930s and 40s, the company built several aircraft, including the YO-51 Dragonfly observation aircraft and the Navy FR-1 Fireball, a piston and jet-powered fighter aircraft. After World War II, the company’s engineers wanted to find out whether the Fireball with a thrust-to-weight ratio of 1 could take off vertically.

In 1947, the United States Navy’s Bureau of Aeronautics in awarded Ryan a contract to investigate the development of a vertically launched jet fighter. The larger concept of the program was to evaluate the feasibility of submarine-based aircraft. Ryan proceeded to perform several tests from 1947 to 1950 and a flying rig one year later. In 1953, they were awarded a contract to develop a lying jet-powered VTOL aircraft.

With its dimension of just 7 meters, the Ryan X-13 was just large enough to fit a single place cockpit with a tilting seat and the thrust Rolls-Royce Avon turbojet. The aircraft was equipped with a delta wing of 6.4 meters, capped with flat endplates. The first prototype was fitted with temporary landing gear and made its first horizontal flight on December 10, 1955.

On 28 May 1956 the first vertical hover flight took place. The technicians had omitted the landing gear on the second prototype, a catch hook was fitted instead of the nose wheel, and the main wheels had been reduced to small supports. The X-13 was to be hooked to a rope that was attached to a launch ramp. Because the pilot had a bad downward view (which was a big obstacle for the other tail starter developments), simple height markings were attached to the ramp, which made it easier for the pilot to latch in and out. The transition from hovering to horizontal flight succeeded for the first time on 28 November 1956, and on 11 April 1957 the first “complete” flight with notching from the ramp, transition into horizontal flight and back into hovering flight and finally re-engaging into the ramp took place. During a demonstration in front of more than 3000 spectators, this process was repeated on July 30 of the same year, when it was demonstrated in Washington, D.C and crossed Potomac River before landing at Pentagon.

On September 30, 1957, the X-13 flew for the last time and the program was discontinued. The X-13 had met the expectations of this test model; however, the development of further rear starters was already regarded as a dead end, which prevented a successor model. The first X-13 belongs to the National Air and Space Museum and is on loan from the San Diego Aerospace Museum, California. The second copy is on display at the National Museum of the United States Air Force in Dayton, Ohio.

Meanwhile in the UK

Another more influential early functional contribution to VTOL was Rolls-Royce’s Thrust Measuring Rig (“flying bedstead”) of 1953. This led to the first VTOL engines as used in the first British VTOL aircraft, the Short SC.1 (1957), Short Brothers and Harland, Belfast which used four vertical lift engines with a horizontal one for forward thrust. In the military sector, the Hawker Siddeley Harrier is currently the only practically used vertical take-off jet aircraft. The first flight was in 1966, and the model is still in service today. The Harrier is used on aircraft carriers where the ability to land vertically is important because of the limited space available. Furthermore, the Harrier masters some flight manoeuvres which are of great advantage in a combat situation. A Soviet model comparable to the Harrier was the Yakovlev Yak-38, which was taken out of service in the mid-1990s.