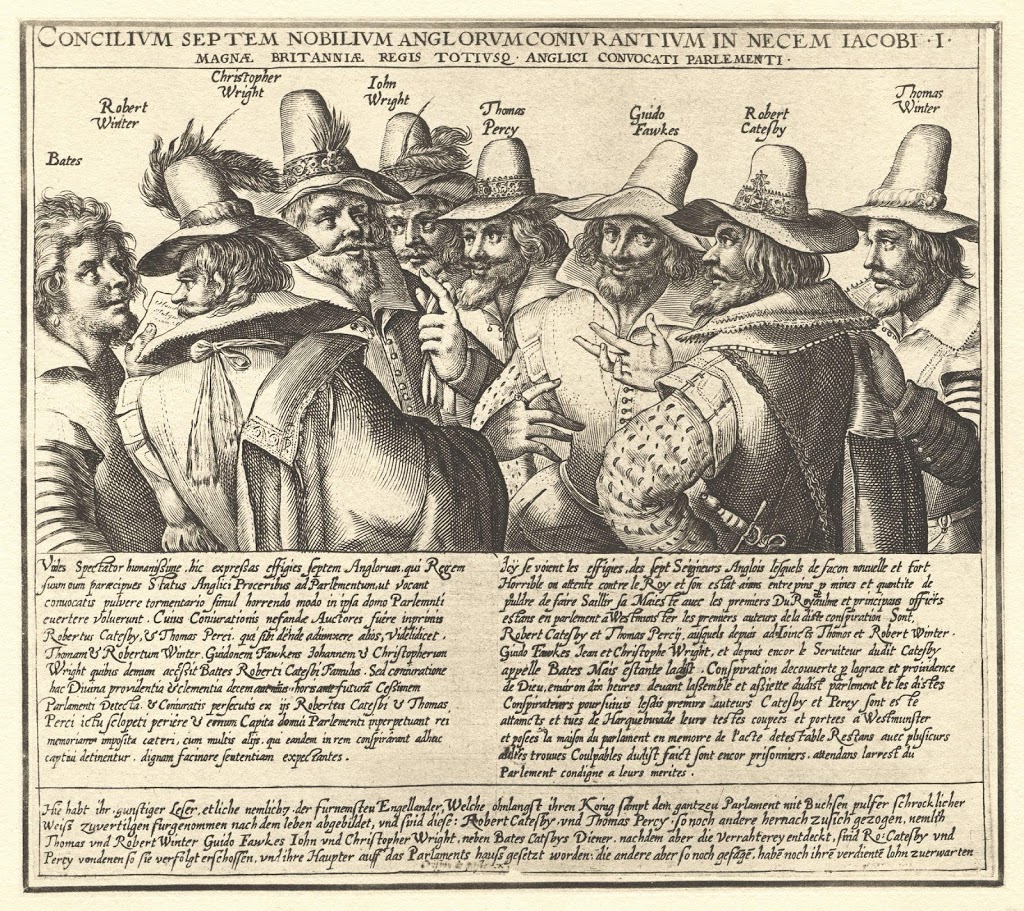 On November 5, 1605, the famous Gunpowder Plot planning the assassination of King James I of England was uncovered and Guy Fawkes as one of its leaders was arrested, convicted and sentenced to be hanged, drawn and quartered.

“Remember, remember,The Fifth of November,Gunpowder treason and plot;For I see no reasonWhy Gunpowder TreasonShould ever be forgot.”
— Nursery Rhyme

The plan of the conspirators was to blow up the House of Lords during the State Opening of England’s Parliament on 5 November 1605, as the first step to a popular revolt in the Midlands during which James’s nine-year-old daughter, Princess Elizabeth Stuart (later Elizabeth of Bohemia), should be installed as the Catholic head of state. But, we have to start a little earlier. It was the year 1603 AD that marked the end of an era. After 45 years on the English throne, famous Queen Elizabeth I was dying. All signs suggested her successor would be James VI of Scotland, the son of Mary Queen of Scots – the queen who fled 1567 to England and had been executed in 1587 on Elizabeth’s orders. With his Catholic mother in England, James was brought up in Scotland as a Protestant. Upon the news of his accession to the throne English Catholics were very upset, because again another Protestant should become King of England and Catholics had suffered severe persecution since 1570, when the Pope had excommunicated Queen Elizabeth I,[8] releasing her subjects from their allegiance to her. In fact, to the Tudor State, Catholics in general were all potential traitors. It was forbidden for them to go to the Mass and instead they were forced to attend Anglican services, with steep fines for those recusants who dared to refuse.

Plotting against James I

But James I, now king of England, felt offended by the Catholics’ gradually increasing strength in England. In July 1603 the discovery of two minor Catholic plots against King James I made the situation even worse. Although most Catholics were horrified, all of them were tainted by the threat of treason. In February 1604 King James publicly announced his ‘utter detestation‘ of Catholicism. Within a few days all priests and Jesuits had been expelled and recusancy fines reintroduced.

In May 1604, Robert Catesby, described later as a charismatic and rather influential man, as well as a religious zealot, devised the Gunpowder Plot, a scheme to kill King James and as many Members of the English Parliament as possible. At a meeting at the Duck and Drake Inn Robert Catesby explained his plan in detail to Guy Fawkes, Thomas Percy, John Wright, and Thomas Wintour. All the men agreed under oath to join the conspiracy. Over the next few months Francis Tresham, Everard Digby, Robert Wintour, Thomas Bates and Christopher Wright also agreed to take part in the assassination of the king. The date for the attack was fixed for 5 November 1605.

But, the plot was revealed to the authorities, when an anonymously sent letter reached Catholic member of parlament William Parker, 4th Baron Monteagle stating that he should under false pretenses not attend at the House of Lords on that very day. On the eve of the planned explosion, during a search of the House of Lords, Guy Fawkes was found guarding 36 barrels of gunpowder, which adds up to 2,5 tons overall and really was sufficient to reduce entire Westminster palace to rubble. News of his arrest caused the other conspirators to flee London, warning Robert Catesby along their way. Several of the plotters tried to made a stand against the pursuing Sir Robert Walsh, High Sheriff of Worcestershire and his men, but in the ensuing battle Robert Catesby and three of his fellow conspirators were shot and killed.

Over the next few days, Guy Fawkes was questioned and tortured, and eventually he broke. Eight of the conspirators, including Fawkes were brought to trial on January 26, 1606. Immediately before his execution on 31 January, Fawkes jumped from the scaffold where he was to be hanged and broke his neck, thus avoiding the agony of the mutilation that followed. The uncovering of the planned assassination prevented a re-emancipation of the Catholic faith in England for another 200 years, until the Catholic emancipation from the late 18th century. The significance of these events should not be underestimated against the background of the further development of Great Britain.

Fawkes became synonymous with the Gunpowder Plot, the failure of which has been commemorated in England since 5 November 1605. His effigy is traditionally burned on a bonfire, commonly accompanied by a firework display. But today, the face of Guy Fawkes in form of a mask is well known throughout the world, because the associated hacktivist group known as ‘Anonymous’ has decided to appear in public only wearing Guy Fawkes masks which have become sort of a trademark for Anonymous. While the use of a mask on an effigy has long roots as part of Guy Fawkes Night celebrations, a stylized mask designed by illustrator David Lloyd came to represent broader protest after it was used as a major plot element in ‘V for Vendetta‘, published in 1982, and its 2005 film adaptation.

To this day, the Yeomen of the Guard search the cellars under the Houses of Parliament before the annual opening of parliament by the ruling monarch. However, in the United Kingdom Guy Fawkes sometimes is still referred to as ‘the last man to enter Parliament with honest intentions.‘