You are here: Home › art › Piero della Francesca and the Use of Geometric Forms and Perspective 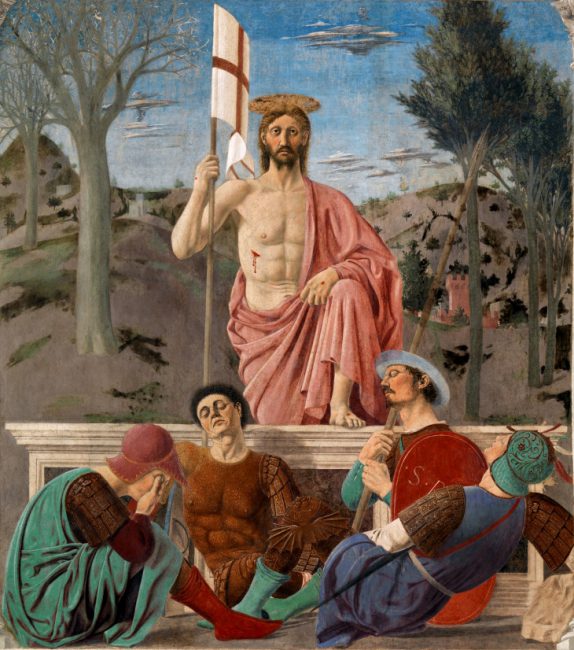 On October 12, 1492, Early Renaissance painter Piero della Francesca passed away. His painting is characterized by its serene humanism, its use of geometric forms and perspective.

Piero della Franchesca probably spent his education and youth in Florence, where in the 1430s a bright, pastel coloration was cultivated, which was also propagated by Leon Battista Alberti in his painting treatise (trattato della pittura) in 1435. Above all Domenico Veneziano, whom Piero demonstrably worked with in Florence in 1439, but also Fra Angelico will have influenced him in this sense, while he was impressed by Masaccio’s thoughtful arrangement of the figures in the room. Piero probably did not return to Florence after 1440, but in 1459 he worked briefly for the Pope in Rome, otherwise he worked in the Tuscan province (Arezzo, Sansepolcro) from 1442 and for provincial princes in Urbino, Ferrara or Rimini.

Since there is little reliable data on Piero’s life and individual works, the chronology of his works is controversial and the information in the following catalog raisonné lists correspondingly extended periods of origin. Whereas earlier attempts were made to derive a sequence of works from the development of style, more recent research tends to use historical (Ginzburg) and related iconographic evidence (Roeck) to make the origins of individual works probable. In addition to bourgeois donors of ecclesiastical frescoes, it is above all court circles around the rulers in Rimini and Sansepolcro (Malatesta) or Urbino (Montefeltro) whose disputes among themselves are reflected in coded pictorial details. Piero’s pictorial language is characterized by antique reminiscences, to which he had access between 1452 and 1466 in the circle of artists and humanists at the court of Federico da Montefeltro in Urbino, and which also influenced his later theoretical works. Among the artists he met at the ducal court was Melozzo da Forli.

Among his students were probably Luca Signorelli and Pietro Perugino, as well as the mathematician Luca Pacioli (ca. 1445-1514), who came from his home town and was later suspected of plagiarism by Giorgio Vasari.[1] Piero developed unmistakably peculiar stylistic features. The scenarios of his paintings are characterized by serious solemnity. The light that floods everything, however, softens the severity of these figure compositions. They are based on basic geometric structures, a grid of verticals and horizontals, which determined his style throughout his life up to his theoretical late work. This explains why his long neglected work was only rediscovered and admired in the 1920s, the era of New Objectivity and Pittura metafisica. 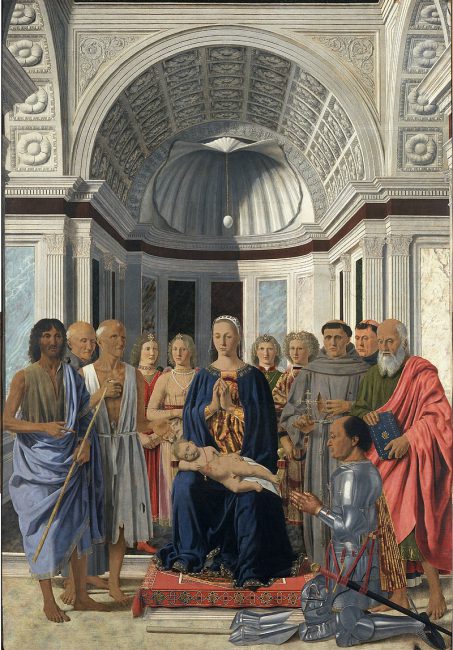 Around 1478 he stopped painting to devote himself entirely to theory. In his youth, Piero was trained in mathematics, which most likely was for mercantilism. Thus he wrote important books on art theory, dealing primarily with perspective, geometry and trigonometry: De prospectiva pingendi and Libellus de quinque corporibus regularibus. Piero della Francesca was the first painter to attempt to solve perspective problems with the help of mathematics or to perfect the use of perspective with geometric and mathematical aids. There is also a treatise by him in the Biblioteca Laurenziana in Florence called Del Abaco. He was responsible for the rediscovery of six Archimedean bodies [3]. Much of Piero’s work was later absorbed into the writing of others, notably Luca Pacioli. Piero’s work on solid geometry was translated in Pacioli’s Divina proportione, a work illustrated by Leonardo da Vinci.[2]

He drew up his will on July 5, 1487. Five years later he died blind and lonely in his birthplace. He exerted a great influence on the following generation of painters such as Andrea Mantegna and Luca Signorelli, and Leonardo and Raphael must also have known his works.