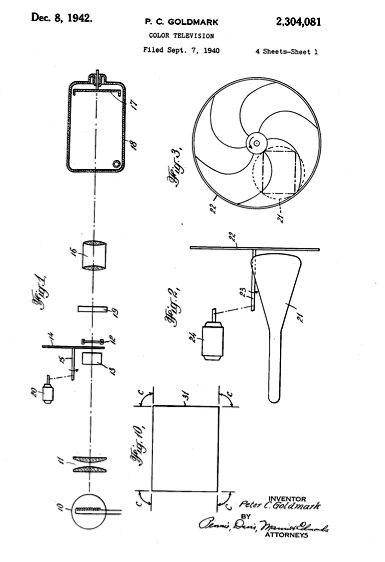 Peter Carl Goldmark was born in Budapest, Hungary, and little is known about his early years. But, from his autobiography, we that he know grew up in a classical musical environment, which had strong influences on his decisions in later life.[1] At the end of World War I in 1919, the family moved to Vienna to escape the communist regime that took over Hungary. Peter’s interest in radio led him to study engineering, but he was unable to register at the Technische Hochschule in Vienna and spent a year at the Technische Hochschule in Berlin. In 1931, he earned his PhD in physics in Vienna. Goldmark received his first exposure to television already in 1926 while in graduate school in Vienna. He later hoped to work together with John Logie Baird but was turned down for a job after meeting Baird for lunch in London. [4]

CBS and the Long-Playing Record

Back in Vienna, he eventually met radio correspondent H. V. Kaltenborn of CBS, who convinced him to move to the United States. In 1936, Goldmark joined CBS Laboratories as Chief Television Engineer, and one year later he became a naturalized citizen of the U.S. In the following years, he was instrumental in developing the long-playing microgroove 33-1/3 rpm phonograph disc, the standard for incorporating multiple or lengthy recorded works on a single disc for two generations. From 1945 to 1948, he developed the filler-free compound (made of PVC and PV acetate), which reduced the noise of the records; in addition, the speed could be reduced from 78 to 33⅓ min-1. In 1948, Goldmark invented the plastic long-playing record, which soon replaced the shellac record.

Color TV and the Incompatibility Problem

In addition to his work on the LP record,[5] Goldmark developed field-sequential color technology for color television while at CBS. During a postponed honeymoon with his second wife in Montreal in the spring of 1940, Peter Carl Goldmark attended a screening of the film Gone with the Wind in Technicolor. He was fascinated by the color images and soon became enthusiastic about the idea of color images on television. After his return to the United States, he set about creating a prototype color television. The system, first demonstrated on August 29, 1940, and shown to the press on September 3 used a rapidly rotating color wheel that alternated transmission in red, green and blue at the rate of twenty pictures a second. The system transmitted on 343 lines, about 100 less than a black and white set, and at a different field scan rate, and thus was incompatible with television sets currently on the market without an adapter. In the first public demo, it projected colorful images of flowers, a red boat sailed into a sunset and a girl chased a ball. On December 2, 1940, the system broadcast the first live color TV images on experimental CBS channels.

During World War II, Goldmark was put in charge of a group developing electronic counter measure receivers. After the end of the war, Goldmark again took up the development of color television using the field sequential method. Although CBS did broadcast in color with the Goldmark system in 1950–1951, the incompatibility problem remained for the about ten million receivers that were then in use.

In the end, another “compatible color” technology developed for RCA and NBC (by a team led by Richard Kell, George H. Brown and others) was compatible with existing black and white TVs. Goldmark and others have pointed out that the CBS color wheel system did provide better picture quality than RCA’s system, but the compatibility problem proved its downfall. An improved RCA/NBC color system submitted in July 1953 became the industry standard chosen by the Federal Communications Commission (FCC) in December 1953. An interesting fact is that cameras using the color wheel system continued to be used for scientific research for several more decades, including the color lunar surface TV cameras during all the 1970s NASA Apollo moon landings.

Goldmark also continued his work in developing new LP-related technologies, such as the Highway Hi-Fi, a system designed to play 7-inch LP records in automobiles. After Goldmark became a vice president of CBS in 1950, he developed the scanning system that allowed the U.S. Lunar Orbiter spacecraft (launched in 1966) to relay photographs 238,000 miles (380,000 kilometres) from the Moon to the Earth.[6]

Goldmark can also be considered the father of video recording. With the goal of producing a tool for educational media storage, hedeveloped a system called electronic video recording (EVR). This futuristic home video playback device used reels of film stored in plastic cassettes to electronically store audio and video signals, and was first announced in 1967. A B&W prototype was demonstrated in 1969 (promising color playback in future models), but the invention floundered when it proved to be difficult and costly to manufacture.[3]As with color television, Goldmark’s EVR film-based system was superseded by another technology, in this case Sony‘s U-Matic 3/4″ videocassette format in late 1971, since the cassette tape format was cheaper and more effective.

On November 22, 1977, President Jimmy Carter presented Goldmark with the National Medal of Science. He died in an automobile accident on December 7, 1977 in  in Westchester County, New York, at age 71. According to György Marx [9], he was one of The Martians. This term refers to a group of prominent Hungarian scientists (mostly, but not exclusively, physicists and mathematicians) who emigrated to the United States in the early half of the 20th century. Leó Szilárd, who jokingly suggested that Hungary was a front for aliens from Mars, used this term. In an answer to the question of why there is no evidence of intelligent life beyond Earth despite the high probability of it existing, Szilárd responded: “They are already here among us – they just call themselves Hungarians.“