You are here: Home › paleontology › Othniel Charles Marsh and the Great Bone Wars 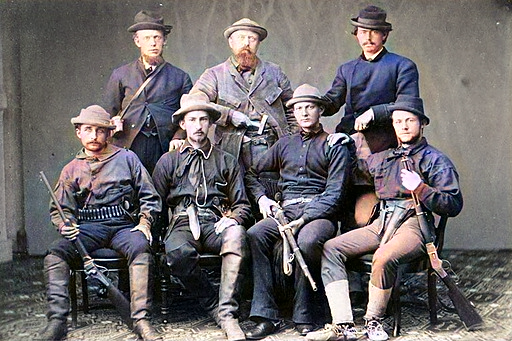 On October 29, 1831, American paleontologist Othniel Charles Marsh was born. Being one of the preeminent scientists in the field, he discovered over 1000 fossils and contributed greatly to knowledge of extinct North American vertebrates. From the 1870s to 1890s he competed with rival paleontologist Edward Drinker Cope in a period of frenzied Western American expeditions known as the Bone Wars.[5]

The term “paleontology” was coined just nine years before Othniel Charles Marsh‘s birth October 29, 1831 on a farm in Lockport, New York, USA. A family of modest means, his father’s only ambition for his son was that he become a field hand on the family farm. But his mother Mary was the younger sister of famous banker and philanthropist George Peabody. Unfortunately she died when the boy was not quite 3 years old. With the support of his millionaire uncle, Marsh graduated from Phillips Academy, Andover in 1856 and Yale College in 1860. He then studied geology and mineralogy at Yale’s Sheffield Scientific School (1860-1862), and afterwards paleontology and anatomy in Berlin, Heidelberg and Breslau (1862-1865). He returned to the United States in 1866 and was appointed the first Professor of vertebrate paleontology at Yale University in the U.S. It was at this time, in the early 1860s, while Peabody was making plans for the eventual distribution of his fortune to worthy causes, that Marsh persuaded him to include Yale in his list of beneficiaries and to establish the Peabody Museum of Natural History at Yale with a gift of $150,000. In 1867 he was appointed one of the Museum’s first curators, and also assumed the (unofficial) directorship of the Museum which he had been instrumental in establishing.[2] Marsh himself received a substantial inheritance after Peabody’s death in 1869, which spared him the necessity of receiving a salary from Yale — and doing the teaching to earn it.

Marsh should meet his strongest competitor and opponent Edward Drinker Cope,[5] while being in Berlin as a graduate student. Edward Drinker Cope was born nine years after Marsh on July 28, 1840 to a wealthy family in Pennsylvania. He took an immediate liking to natural history as a child and attended classes at the Academy of Natural Sciences in Philadelphia. At 18, Cope published his first scholarly article while working as a researcher at the Academy of Natural Sciences. In 1863, to avoid Cope being drafted into the Civil War, Cope’s father sent his son to Germany to study natural history. There he met fellow graduate student O.C. Marsh at age thirty-two, also attending the University of Berlin. Othniel Charles Marsh held two university degrees in comparison to Edward’s lack of formal schooling past sixteen, but Edward had written 37 scientific papers in comparison to Marsh’s two published works. Upon returning to the U.S. in 1864, Cope and Marsh maintained their friendly relationship and maintained correspondence, exchanging manuscripts, fossils, and photographs.[4] 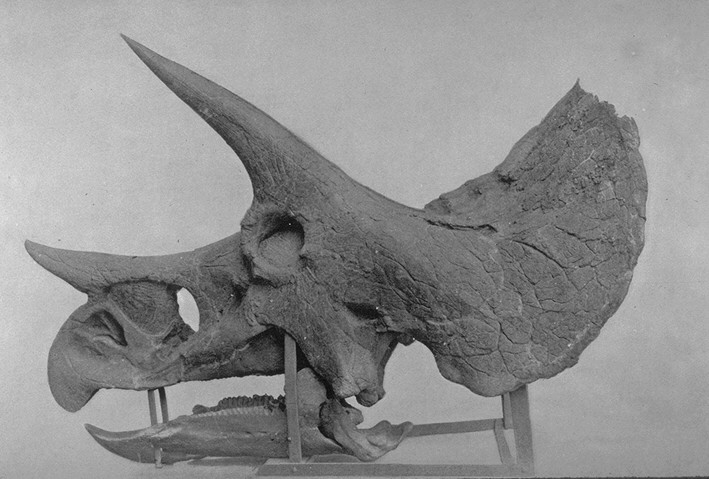 Legend has it that the battle between the men began when Marsh paid some of Cope’s hired diggers to send fossils to him and not to Cope. Matters became worse in 1870, when Cope published a description of Elasmosaurus, a giant plesiosaur – and Marsh gleefully pointed out that Cope had accidentally placed the skull on the wrong end of the beast. The battle was on: for the next twenty years, the two men attacked and slandered each other in print, while they and their crews raced to find and describe the most and the finest new fossils. Each scientist hired field crews to unearth and ship back fossils as fast as possible. The rival crews were known to spy on each other, dynamite their own and each other’s secret localities to keep their opponents from digging there, and occasionally steal each other’s fossils – all the time exposed to harsh conditions and danger from hostile Native Americans. Marsh eventually “won” the so-called “Bone Wars” by finding 80 new species of dinosaur, while Cope found 56. Cope did not take this lightly, and the two fought within scientific journals for many years to come, rumored to be at the expense of recognized scientific method.[4]

Credited with the discovery of more than a thousand fossil vertebrates and the description of at least 500 more, Marsh published major works on toothed birds, gigantic horned mammals, and North American dinosaurs. He also wrote Fossil Horses in America (1874) and Introduction and Succession of Vertebrate Life in America (1877). Marsh garnered national attention in the late 1860s when he revealed that the alleged remains of a prehistoric man known as the Cardiff Giant were fake.[3] Othniel Charles Marsh died on March 18, 1899, a few years after his great rival Cope

The most notorious scientific feud in history – Lukas Rieppel, [11]