You are here: Home › geology › Nicholas Shackleton and Paleoclimatology 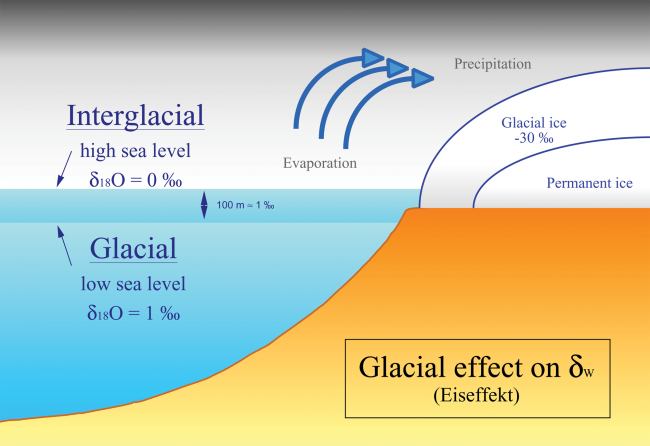 Glacial effect (after Shackleton): The ratio of stable oxygen isotopes 16O/18O in the oceans is changed by the build up of ice sheets on the continents during glacials due to fractionated evaporation and precipitation in high latitudes. A global change in sea level of about 100 m between glacials and interglacials generates a difference of 1 per mil. The variations in the isotope ratio are archived in carbonaceous plankton shells and can be used to date quaternary sediments and reconstruct paleoclimate. Picture: Hannes Grobe, Alfred Wegener Institute for Polar and Marine Research, Bremerhaven, Germany, CC BY-SA 2.5 via Wikimedia Commons

On June 23, 1937, English geologist and paleoclimatologist Nicholas Shackleton was born. Shackleton was the son of the distinguished field geologist Robert Millner Shackleton and great-nephew of the explorer Ernest Shackleton.[4] He helped identify carbon dioxide as a greenhouse gas and studied the ancient climate changes of the Quaternary period, the last 1.8 million years, during which there were periods building up massive ice sheets and mountain ice caps alternating with warm weather when the ice receded.

After being educated at Cranbrook School, Kent. Nicholas Shackleton went to read natural sciences at Clare College, Cambridge. Shackleton graduated with the Bachelor of Arts degree in 1961. He received his Master of Arts three years later and was awarded the PhD degree from Cabridge in 1967 for his thesis “The Measurement of Paleotemperatures in the Quaternary Era“. In 1991, Shackleton became Ad hominem Professor at Cambridge and worked at the Godwin Institute for Quaternary Research.

A Key Figure of Paleooceanography

Nicholas Shackleton became one of the key scientists in the field of paleoceanography, the study of changes in climate taken on the scale of the entire history of Earth, and he published more than 200 scientific papers on the topic. Shackleton became a pioneer in the use of mass spectrometry to determine changes in climate as recorded in the oxygen isotope composition of calcareous microfossils, and he found evidence that the Earth’s last magnetic field reversal was 780,000 years ago.

Pacemaker of the Ice Ages

One of Nicholas Shackleton’s most famous publication was a scientific partnership with James Hays and John Imbrie on “Variations in the Earth’s orbit: Pacemaker of the ice ages“. With sediment cores, Shackleton, Hays and Imbrie demonstrated that oscillations in climate over the past few million years could be correlated with variations in the orbital and positional relationship between the Earth and the Sun. One of the preceding works in this field was the Milankovitch theory, which describes the collective effects of changes in the Earth’s movements upon its climate, named after Serbian geophysicist and astronomer Milutin Milanković.

In his later work, Nicholas Shackleton intended to develop precise timescales based on matching the periodic cycles in deep-sea sediment cores to calculations of incoming sunlight at particular latitudes over geological time. This allowed greater levels of stratigraphic precision than other dating methods, and has also helped to clarify the rates and mechanisms of aspects of climate change. Shackleton also researche on the relationship between the oxygen isotope record of the oceans and isotope records obtained from the ice in Antarctica, the glacial effect. His work was published in 2000 and helped to identify the relative contribution of deep water temperature changes and ice volume changes to the marine isotopic record, and also highlighted the close interdependency between carbon dioxide levels and temperature change over the last 400.000 years.

Shackleton had been a member of the Royal Society since 1985 and was knighted by the Queen of Britain in 1998 for his services to the geosciences. Since 1995 he has been Director of the Godwin Institute for Quaternary Research. From 1999 to 2003 he was President of the International Union for Quaternary Research (INQUA). He was also known for his collection of old woodwind instruments, especially clarinets, which he also played excellently. In 2010 Nick Shackleton was one of ten scientists depicted on a set of postage stamps, in commemoration of the 350th anniversary of the Royal Society. Shackleton was chosen to represent Earth Science. The European Association of Geochemistry quinquennially awards a Science Innovation Award medal named in his honor for work in climatology.