You are here: Home › engineering › The Opening of the Panama Canal 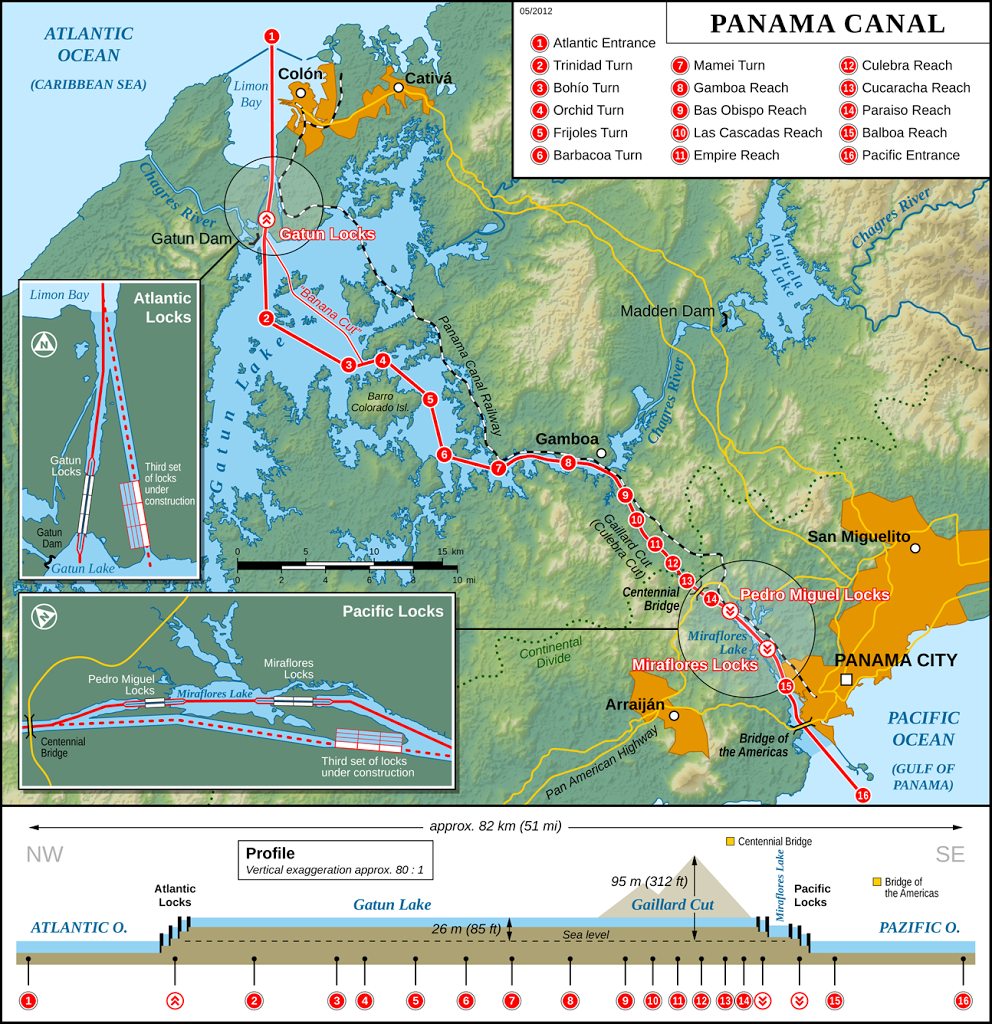 On August 15, 1914, the very first ship, the cargo ship SS Ancon passed the newly built Panama Canal. Unfortunately, in the same month, World War I started fighting in Europe and the official opening ceremony had to be postponed until 1920.

The Panama Canal is an 82 km long ship canal in Panama that connects the Atlantic Ocean (via the Caribbean Sea) to the Pacific Ocean and therefore also a key conduit for international maritime trade. Work on the canal began in 1881 and was completed in 1914. The Panama canal is one of the largest and most difficult engineering projects ever undertaken and is named one of the seven wonders of modern world, making it no longer necessary for ships to sail the lengthy Cape Horn route around the southernmost tip of South America or to navigate the dangerous waters of the Strait of Magellan.

Construction of locks on the Panama Canal, 1913

The Panama Canal shortcut made it possible for ships to travel between the Atlantic and Pacific Oceans in half the time previously required. It all started already in the 16th century, when Charles V, Holy Roman Emperor and King of Spain, ordered a survey for a route through the Americas that would ease the voyage for ships traveling between Spain and Peru. Such a route would have given the Spanish a military advantage over the Portuguese. Almost centuries later during an expedition from 1788 to 1793, Alessandro Malaspina outlined plans for the construction of a canal. Given the strategic location of Panama and the potential offered by its narrow isthmus separating two great oceans, other trade links in the area were attempted over the years.

“…only 10 million of the required 250 million cubic meters of earth had yet been removed. The undertaking is a vast one, far exceeding that of the Suez canal, and every one there believed it would not be finished for many years”
–  Helen Josephine Sanborn, A Winter in Central America and Mexico.

In 1849, the discovery of gold in California created great interest in a shortcut from the Atlantic to the Pacific Ocean. Eventually, the Panama Railway was built to cross the Panama isthmus, opening in 1855. This overland link became a vital piece of Western Hemisphere infrastructure, greatly facilitating trade and largely determining the later canal route. An all-water route between the oceans was still seen as the ideal solution, and in 1855 William Kennish, a Manx-born engineer working for the United States government, surveyed the isthmus and issued a report on a route for a proposed Panama Canal. Encouragement for the idea of a canal also was provided by the French success in building the Suez Canal. In 1881, the first attempt to construct a sea-level canal began under the leadership of Ferdinand de Lesseps, builder of the Suez Canal, with substantial financing and support from Paris. But, the French effort went bankrupt. In 1904, the United States, under President Theodore Roosevelt, bought the French equipment and excavations for US$ 40 million, paid the new country of Panama US$10 million plus more each year, and began work on the Panama Canal on May 4, 1904.

Formally, the Panama canal was opened on August 15, 1914. The Panama Canal has seen annual traffic rise from about 1,000 ships when it opened, to 14,702 vessels in 2008, the latter measuring a total of 309.6 million tons. By 2008, more than 815,000 vessels had passed through the canal, many of them much larger than the original planners could have envisioned.