You are here: Home › explorer › The Hayden Geological Survey and the Yellowstone National Park 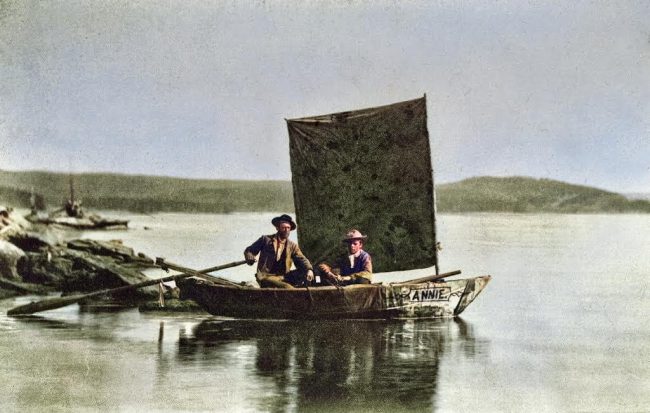 On June 11, 1871, the Hayden Geological Survey of 1871 led by geologist Ferdinand Vandeveer Hayden began, which explored the region of northwestern Wyoming that later became Yellowstone National Park in 1872.

Ferdinand Hayden was born in Westfield, Massachusetts, USA. When Ferdinand Hayden was ten years old his father died. Ferdinand Hayden moved in with his uncle in Ohio. As a young boy he was fascinated with all nature and wildlife, which led him into the field of medicine.  He began teaching at the age of 16, entering Oberlin College two years later and graduating in 1850. He then studied at Albany Medical College in the US state of New York. He graduated in 1853. There he got to know the state geologist of New York, who highly influenced him to join in an exploration of Nebraska Territory, with Fielding Meek in order to study geology and collect fossils. In the next years, the young Hayden accompanied expeditions in the northern Missouri River areas with a partial sponsorship from the Smithsonian Institution.

In the early 1850s, routes for railroads from the Mississippi to the Pacific coast had to be found and the the Pacific Railroad Survey bill was passed. As a result, federally funded Great Surveys undertaken by the Department of the Interior brought together explorers, engineers, scientists and topographers in a common effort to chart the western U.S. Ferdinand Hayden along with John Wesley Powell, Clarence King and George Wheeler were the leaders of these great surveys. By 1871, Hayden had selected the members of his survey team including scientists, a photographer, an artist, as well as friends and colleagues from other surveys. 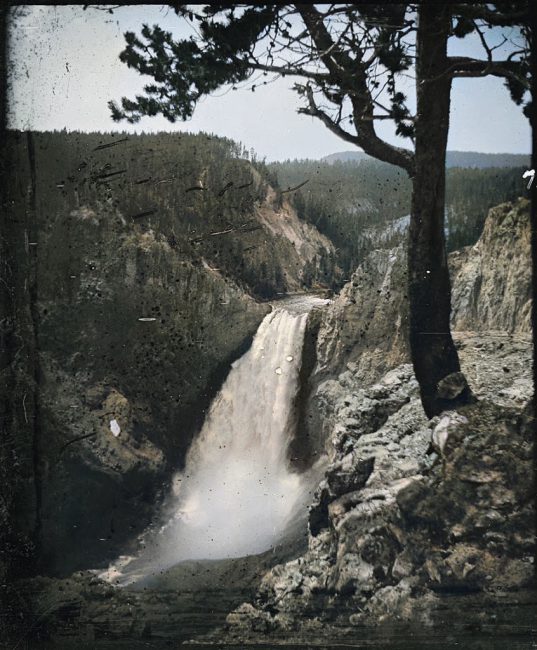 From Utah to the Yellowstone River

On June 8, 1871, the survey officially started in Ogden, Utah. The general route and the camping locations were determined by James Stevenson, the survey manager and director and Stephan Hovey, the wagonmaster. They traveled towards the Idaho Falls, as they are called today, and reached Virginia City, Montana at the beginning of July. Thomas Moran now joined the survey while others, including the botanist and the agricultural statistician and entomologist left the expedition due to health issues. At Fort Ellis, the party was able to resupply and they departed south along the Yellowstone River in the middle of July. Hayden began to realize that the route became too complex for the wagons by the time they had reached Paradise Valley.

The expedition had to abandon the wagons at their base camp in the valley near Emigrant Gulch and proceeded towards Yankee Jim Canyon. The park region was entered on July 21 and the survey camped there for two days. During the longer camping periods, the scientists, photographers and topographers would venture out in small teams from the main party to collect specimens, make observations and document the flora, fauna, geology and geography of the land. In this regard,Hayden was just another scientist. In camp, the scientists would process and document their findings while preparing them for shipment to the Smithsonian Institution at the next available opportunity. Botanical specimens were pressed, dried and labeled. Mineral samples were trimmed, labeled and packaged for shipment. Photographs were cataloged and described. Correspondence was prepared to scientists in the East explaining the findings and progress of the survey. Additionally, the hunters would attempt to acquire enough game to sustain the party.

Hayden and his men had to travel around Mount Washburn for three days in order to reach the source of the Yellowstone River on July 28. They camped as Cascade Creek and the photographer, Jackson, managed to take the first known photographs of the Yellowstone Falls. Also, the expedition members managed to build a small boat and it became the first known boat, which they named Annie, to sail on the waters of Yellowstone Lake. With the help of the boat, the scientists then explored the islands and take soundings of the lake. After moving on, the party spent quite some time in the Lower, Midway and Upper Geyser basins. In mid-August, they traveled around the southern and eastern sides of Yellowstone Lake and while camped at Steamboat Point, the party experienced two sizable earthquakes. 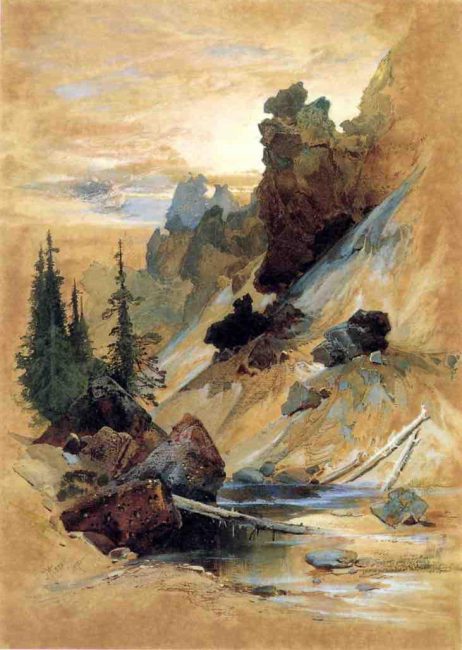 Thomas Moran, a guest artist on the expedition, painted The Devil’s Den on Cascade Creek.

Of course, the numerous sketches and paintings by Thomas Moran and the photographs by William Jackson count as an extremely important outcome of the expedition. However, the most important product of the expedition was Hayden’s lengthy report detailing the findings of his party. Hayden presented this report, the photos, sketches, and paintings to Senators, Congressmen, his superiors in the Department of the Interior, and nearly everyone else who could possibly influence the founding of a park. In December of the same year, a bill was introduced for the establishment of a park at the headwaters of the Yellowstone River and on March 1, 1872, President Ulysses S. Grant signed the bill into law, establishing the Yellowstone region as a public park.

After the establishment of the US Geological Survey in 1879 Hayden worked as a geologist for another seven years before he had to stop working for health reasons. He died in Philadelphia on 22 December 1887.