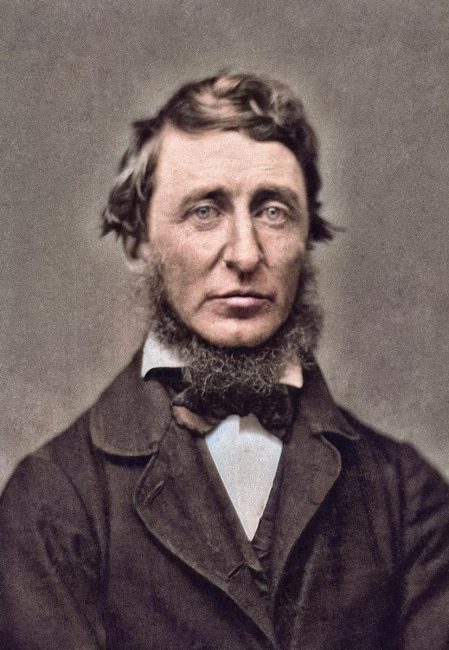 On July 12, 1817, philosopher and author Henry David Thoreau was born. He is probably best known today for his book ‘Walden‘, a reflection upon simple living in natural surroundings, as well as for his essay ‘Civil Disobedience‘, an argument for individual resistance to civil government in moral opposition to an unjust state.

“The law will never make men free; it is men who have got to make the law free.”
— Henry David Thoreau, Slavery in Massachusetts (1854)

The Most Quoted American Author

Thoreau may be the most quoted American author. Excerpts from his writings surface in American thought, conversation, even on t-shirts, posters and greeting cards. Henry David Thoreau was born and lived nearly throughout all his life in Concord, Massachusetts, a small town about twenty miles west of Boston. His father John Thoreau was a pencil manufacturer, an emigrant with French-speaking ancestors from the island of Guernsey. Thoreau received his education at the public school in Concord and at the private Concord Academy. He was sent to Harvard, where he did well and, despite having to drop out for several months for financial and health reasons, was graduated in the top half of his class in 1837.

Henry and his elder brother John taught school for a while but in 1842, John cut himself while shaving and died of lockjaw in his brother’s arms, an untimely death which traumatized the 25 year old Henry. He worked for several years as a surveyor and making pencils with his father. Thoreau met Ralph Waldo Emerson in 1841, who as a poet, unitary and philosopher had founded the unitary movement of American transcendentalism, to which a large circle of American poets and thinkers belonged. After the death of his brother, Thoreau lived temporarily in Emerson’s house in Concord near Boston.

The Experiment at Walden Pond

Under Emerson’s influence, Thoreau developed reformist ideas. At the age of 28 in 1845, wanting to write his first book, he went to Walden pond and built his cabin on land owned by his Concord neighbor Ralph Waldo Emerson to live in the woods for 2 years. two years.[9] This “experiment” in living on the outskirts of town was an intensive time of examination for Thoreau, as he drew close to nature and contemplated the final ends of his own life, which was otherwise at risk of ending in quiet desperation. Thoreau viewed his existential quest as a venture in philosophy, in the ancient Greek sense of the word, because it was motivated by an urgent need to find a reflective understanding of reality that could inform a life of wisdom. The “Walden” experiment made it clear to Thoreau that six weeks of paid work a year are sufficient to secure his livelihood. He could use the remaining time to read, write, reflect and explore nature. Alexander von Humboldt was an author whom he particularly valued and often read. His descriptions of nature had a great influence on Thoreau.[10] 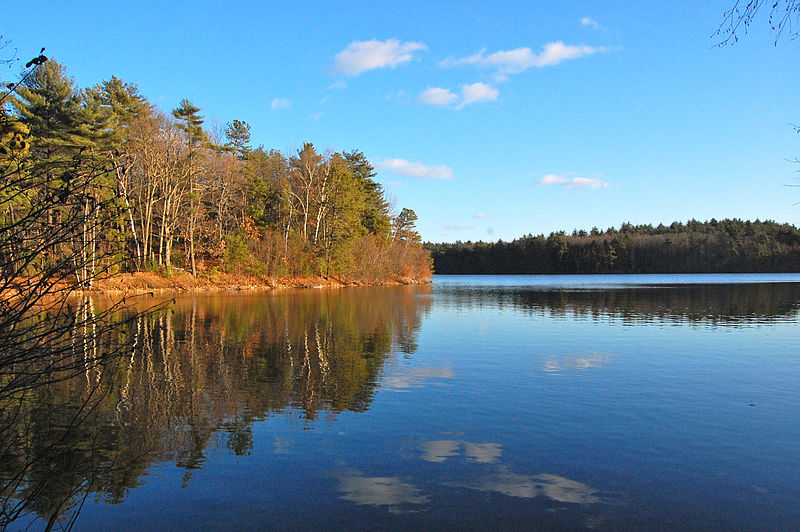 Walden; or, Life in the Woods

“I went to the woods because I wished to live deliberately, to front only the essential facts of life, and see if I could not learn what it had to teach, and not, when I came to die, discover that I had not lived. I did not wish to live what was not life, living is so dear; nor did I wish to practice resignation, unless it was quite necessary. I wanted to live deep and suck out all the marrow of life, to live so sturdily and Spartan-like as to put to rout all that was not life, to cut a broad swath and shave close, to drive life into a corner, and reduce it to its lowest terms, and, if it proved to be mean, why then to get the whole and genuine meanness of it, and publish its meanness to the world; or if it were sublime, to know it by experience, and be able to give a true account of it in my next excursion.”
— Henry David Thoreau, Walden (1854)

Walden pond was a place for him to find solitude while he wrote, but for his ever-questioning mind it was also an experiment in self-reliance and living close to nature, which bore fruit in the 1854 publication of his literary masterpiece – obviously also entitled ‘Walden‘. All in all, Thoreau wrote on countless topics, often including poetry and anecdotes.  The book cannot be regarded as a novel in the true sense of the word, but rather as a summary and form of his diary entries, which he integrates and summarises into the symbolic cycle of a year. His style is characterised by a high degree of flexibility and linguistic skill, which has often made it difficult to translate into other languages. The eighteen chapters of the book are devoted to various aspects of human existence, including reflections on economics, loneliness, the animals of the forest, and the reading of classical literary works.

In 1846 Thoreau was arrested and imprisoned in Concord for one night for nonpayment of his poll tax. This act of defiance, which later resulted in his ‘Civil Disobedience‘,  was a protest against slavery and against the Mexican War, which Thoreau and other abolitionists regarded as a means to expand the slave territory. In principal, Thoreau had no objection to government taxes for highways and schools, which make good neighbors. But government, he charged, is too often based on expediency, which can permit injustice in the name of public convenience. The individual, as he insisted, is never obliged to surrender conscience to the majority or to the State. Therefore today Thoreau is more relevant than ever.

“The mass of men lead lives of quiet desperation. What is called resignation is confirmed desperation.”
— Henry David Thoreau, Walden (1854)

From 1849 Thoreau earned his living as a surveyor, casual worker and lecturer. He kept raining against social injustice and slavery. In 1857 he met the militant opponent of slavery and guerrilla fighter John Brown, who waged a “private war” against slavery with his followers and was hanged two years later. Although Henry David Thoreau continued to favour non-violent resistance, he showed great respect for John Brown in essays and a poem which he even compared with Christ. He proved how serious he was about refusing slavery when, in 1851, he helped an escaped slave to flee to Canada.

Thoreau had become infected with tuberculosis in 1835, but the disease appeared only sporadically. In 1859 bronchitis was added after Thoreau had been out at night in stormy rain. After that, his health deteriorated visibly. In recent years he has worked on unpublished works (mainly The Maine Woods and Excursions). He wrote letters and diary entries until he became too weak. His friends were amazed at the serenity with which Thoreau looked forward to his end. Henry David Thoreau died of tuberculosis on 6 May 1862, at age 44. He never stopped looking into nature for ultimate Truth. Today, Thoreau has become a kind of US-American figure of consensus, who is often quoted in left-wing circles, but also by thinkers who are considered rather conservative. Today, as a writer, he is also considered one of the most striking figures of classical American literature in formal terms.