You are here: Home › history › Murder in the Bathtub – Jean Paul Marat and Charlotte Corday 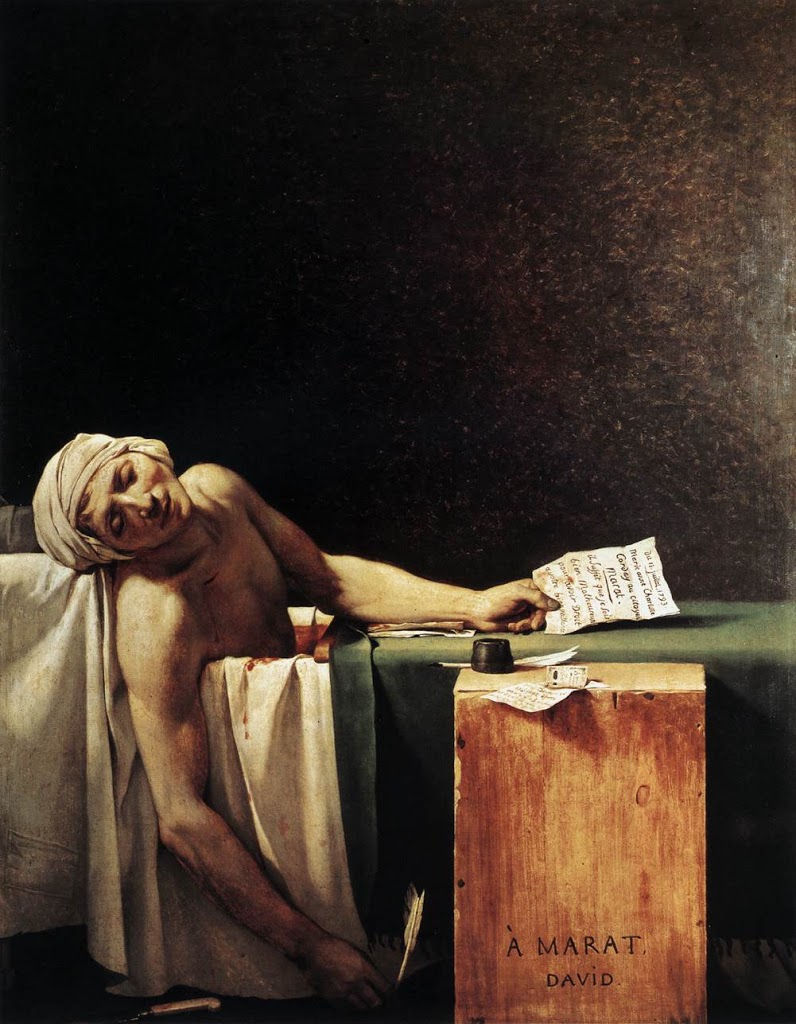 The Death of Jean Paul Marat by Jacques-Louis David (1793),

On July 13, 1793, the ‘martyr of the revolution‘, Jean Paul Marat was assassinated by Charlotte Corday, a 24 year old woman. The physician, natural scientists, and political activist was a member of ‘the Mountain’, a group active during the French Revolution, and author of the radical newspaper ‘L’Ami du peuple’.

“How could liberty ever have established itself amongst us? Apart from several tragic scenes, the revolution has been nothing but a web of farcical scenes… But it is in the nation’s senate that the most grotesque parades have taken place.”
— Jean Paul Marat, L’Ami du peuple, no.672

Jean Paul Marat grew up in Neuenburg, which as a turned place was associated with the Swiss Confederation and at that time was ruled by the Prussian royal family of the Hohenzollern. Due to a skin disease (scrofulosis, associated with a violent itching), Marat suffered from deformities. When he was sixteen years old, he left Switzerland and emigrated alone to Bordeaux near the French Atlantic coast, where he studied medicine. In 1762 he moved to Paris, where he stayed for three years and attended lectures in medicine, physics and philosophy at the university. Because of his success in healing gonorrhea, he was able to make a name for himself as a doctor. Later, he moved to England and could release his first philosophical writings, e.g. “An Essay on the human soul” in 1772. When he also started some scientific approaches in the field of physics, he had to face many opponents due to his temper. It was none other but the famous German author Johann Wolfgang von Goethe who came to Marat’s defense and he then decided to completely abandon himself to the natural sciences.[6]

Simultaneously with his scientific studies he dealt with politics and law and took part in a competition for the reform of criminal law organized in 1777 by the Société économique de Berne with a plan for criminal law reform published in 1780. The first edition was presumably confiscated by the censorship authority, the other editions went unnoticed. Marat suffered not only from his skin disease, which tortured him to such an extent that he often only found peace to write in the bathtub (which is why his murderess met him there in 1793), but also from his appearance. He was only 1.50 meters tall; his head seemed “too massive” for the rest of his body, and “one of his eyes was higher than the other. The associated restrictions in social dealings contributed to the formation of his character. In his mid-forties, Marat went through a period of serious illness, and immediately after he was cured, he began his political activities.

Jean Paul Marat began publishing his famous newspaper “L’Ami du peuple” in 1789, soon it was seen as the voice of the revolutionaries against the Girondists. He described all real or alleged opponents of the revolution as traitors and enemies of the people, published their names in his newspaper and thus handed them over to the revenge of the people. This led to an arrest warrant being issued against him by the Châtelet Court on 6 October 1789. An attempt was made to arrest him, which was successful on 12 December 1789, but he was released after an interrogation. After a period of hide and seek with the French police, during which he could still publish his paper and demand up to 100.000 deaths on the foe side, he became a member of the Jacobin Club and an influential man in the National Convention.

The Dark Spot of the French Revolution

The September Massacres of 1792 decreased his fame and popularity. Marat was made responsible for the cruelty that is now seen as the ‘dark spot’ of the French Revolution. Masses of revolutionaries stormed the prisons and killed the opponents of the revolution to begin with. But then many other prisoners, having nothing to do with the current political uproar including women, priests, and also children were killed. After a defeat of the Girondists by the Jacobins, Charlotte Corday took action.

The Murder in the Bathtub

She actually wanted to stab Marat in public on 14 July, the anniversary of the storming of the Bastille. But Marat was tied to the house because of his scrofula. Under the pretext that she wanted to denounce some Girondists from her hometown Caen, a stronghold of counterrevolution, she visited Marat on 13 July 1793. However, Marat’s partner Simone Évrard did not let her in. She went back to her hotel, announced her visit in writing and returned to Marat’s apartment the same day without having received an answer. In the bathroom, after a short conversation, she stabbed him in the throat and chest (near the clavicle) with such force that a large artery ruptured and Marat immediately passed out.  The composer Guillaume Pierre Antoine Gatayes is said to have found the lifeless man and an editor of the Ami du Peuple is said to have knocked down Corday, whereupon she was arrested. At no time did she resist. It was guillotined on 17 July 1793. Through her deed Marat first became an even greater hero and martyr. His murderess achieved the status of a martyr of counterrevolution through her execution.

Four months after the murder of Marat, Jacques-Louis David presented his famous painting “The Death of Marat” to the convent and had it hung on the front of the hall.[7] He gave a speech in which he called his followers to revenge. Many years after his death, the name Marat was remembered as well as the person behind it. The Soviet Union named a battleship after him and even an opera by Walter Haupt was composed in his honor and premiered in 1984.