You are here: Home › psychology › The psychologist must study mankind from the historical or comparative standpoint – Moritz Lazarus 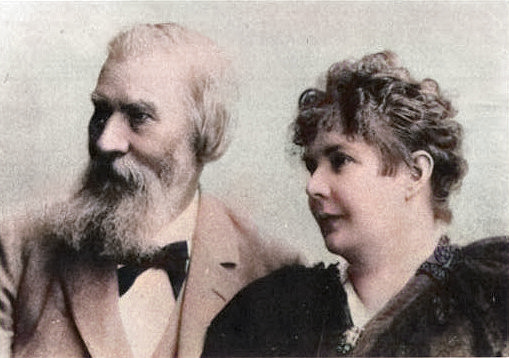 On September 15, 1824, German philosopher and psychologist Moritz Lazarus was born. He held that humanity must be studied from the historical, comparative viewpoint, analyzing the elements that constitute the fabric of society, with its customs, its conventions, and the main tendencies of its evolution. He was Jewish and a leading opponent of anti-Semitism in his time.

Moritz Lazarus received a Jewish education, taking classes in Hebrew literature and history until moving to study at a national Prussian school when he was about 9 years old. Moritz‘ father was an expert in Prussian law and served as a rabbinic judge in the local Beth Din. He represented the citizens in their connections with the authorities. Also he educated his son Moritz in Prussian law, but later insisted that the young Lazarus specialized in merchandizing in the house of an acquaintance in the city of Posen. In Berlin, he continued with his philosophical studies and also learned more about the ritual of German language and cultures. It is assumed that Lazarus got really caught in the spirit of the revolution and wakened his patriotic feelings towards Prussia and the Prussian culture. Lazarus even published his work “The moral priority of Prussians in Germany” in 1850. [1,2]

The Life of the Soul

Along with his colleague Steinthal, Lazarus established the magazine “Zeitschrift für Völkerpsychologie und Sprachwissenschaft” (Journal for international psychology and linguistics) and simultaneously he started to print his trilogy of research called “The life of the soul“. It deals with the principal problems of psychology from the standpoint of the philosophy of Herbart. Written in a popular and easy style, it soon found a large circle of readers. Two years later the second part was published and in this book, Lazarus discussed the relationship between thinking and speaking, as well as how languages were born and developed, and how they create the collective soul in the nations. In 1861, Lazarus moved another step further and strengthened his analogy between individual research and the collective soul: there is a so called ‘national soul‘ which is greater than the total number of individual souls. The language is the most significant representation of the national soul, and there exists a dual influence between the individual and the collective soul. He said, that it is possible to understand the rules of the human soul and from it the collective soul. The national soul always exists in the individual soul.[1]

In 1860 Lazarus was asked to be an honorary professor without pay at the small university of Bern, Switzerland. Lazarus‘ chances of being able to get a university position at a German university were very low because he was Jewish. However, the scientist had no financial worries and he chose to accept the position. It is believed that Lazarus became the first professor of psychology in any university worldwide. He was quite successful in Bern, his lectures were always full and it is known that the audiences were the leaders of Swiss society and serving diplomats.

During his time at the university, Lazarus also spread his belief that women needed to be better included in research and philosophy. Even though, Lazarus seemed to fit in very well in Bern, he had to return to Berlin in 1867, where he became more involved with the issues of the Jewish community in the city. In Berlin, he tried to promote a new, activist opinion claiming that Jews need to fight against anti-Semitism, for equality and emancipation actively. In his article Was heißt National? (What means National), Lazarus claimed that the strength of Germany was in her multi culturalness including her Jews. He spoke on behalf of German unification and nationalism and asked his Jewish brothers to remain faithful to these German values.[1,2]

From 1860 to 1866 he was professor in the University of Berne, and subsequently returned to Berlin as professor of philosophy in the Kriegsakademie (1868) and later in the university of Berlin (1873). On the occasion of his seventieth birthday he was honored with the title of Geheimrath. He died in Meran on April 13, 1903, at age 78.

Thinking and Talking About the Self with John Perry, [7]