You are here: Home › chemistry › Melvin Calvin and the Calvin Cycle in Photosynthesis 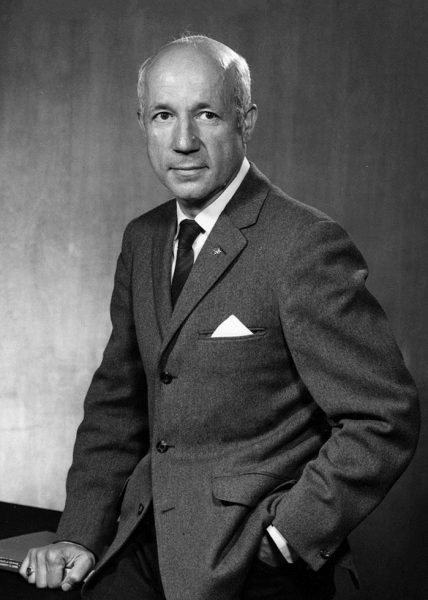 On April 8, 1911, American biochemist Melvin Calvin was born. Calvin is best known for furthering our knowledge of the mechanism of photosynthesis with the discovery the Calvin cycle along with Andrew Benson and James Bassham, for which he was awarded the 1961 Nobel Prize in Chemistry.

Calvin was born in St. Paul, Minnesota, the son of Elias Calvin and Rose Herwitz, immigrants from Russia. Originally, his father was from Kalvaria, Lithuania, so the Ellis Island immigration authorities renamed him Calvin.[2] As a small child Calvin’s family moved to Detroit, where he graduated from Central High School in 1928, and where Calvin showed an early interest in science, especially chemistry and physics. Melvin Calvin earned his Bachelor of Science from the Michigan College of Mining and Technology based on a full scholarship in 1931, where he was the school’s first chemistry major. He earned his Ph.D. in chemistry from the University of Minnesota in Minneapolis in 1935 under the supervision of George C. Glockler with a dissertation on the electron affinity of halogen atoms [2].

He then spent the next four years doing postdoctoral work at the University of Manchester working with Michael Polany as Rockefeller Fellow. His research topic was the interactions between quantum mechanical theory and chemical experimentation, starting with platinum-hydrogen activation systems. A chance visit with Joel Hildebrand at Manchester resulted in an invitation from Gilbert N. Lewis to join the chemistry faculty at the University of California. He rose through the ranks to become director (1946) of the bioorganic chemistry group at the school’s Lawrence Radiation Laboratory (now the Lawrence Livermore National Laboratory), director of the Laboratory of Chemical Biodynamics (1963), associate director of Lawrence Livermore (1967), and University Professor of Chemistry (1971).[2]

At Berkeley, Calvin continued his work on hydrogen activation and began work on the colour of organic compounds, leading him to study the electronic structure of organic molecules.[2] In 1945, Calvin began with his groundbreaking work on photosynthesis. It had been known for two centuries that sunlight allows green plants to fix atmospheric carbon dioxide into all the organic compounds needed for the plants to grow and reproduce. What was not known was how it was done. The problem, of course, was that, once inside the plant, the carbon atoms that had originated in the carbon dioxide could not be distinguished from those already there; where had the carbon dioxide carbons gone?

The Discovery of the Calvin Cycle

Hope for resolution came with the discovery in the early 1930s of the first radioisotope of carbon.[3] Using the carbon-14 isotope as a tracer, Calvin, Andrew Benson and James Bassham mapped the complete route that carbon travels through a plant during photosynthesis, starting from its absorption as atmospheric carbon dioxide to its conversion into carbohydrates and other organic compounds. In doing so, Calvin, Benson and Bassham showed that sunlight acts on the chlorophyll in a plant to fuel the manufacturing of organic compounds, rather than on carbon dioxide as was previously believed. They discovered the so-called Calvin cycle or Calvin–Benson–Bassham Cycle, in which the “dark” photosynthetic reactions are impelled by compounds produced in the “light” reactions that occur on absorption of light by chlorophyll to yield oxygen. 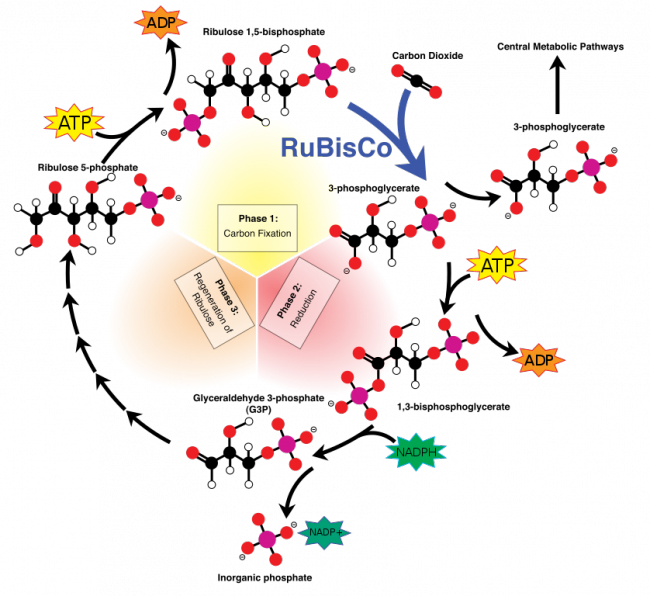 Overview of the Calvin cycle and carbon fixation

Calvin’s bioorganic group eventually required more space, so he designed the new Laboratory of Chemical Biodynamics (the “Roundhouse” or “Calvin Carousel”). This circular building contained open laboratories and numerous windows but few walls to encourage the interdisciplinary interaction that he had carried out with his photosynthesis group at the old Radiation Laboratory. [2] Calvin and the group’s interest in photosynthesis was by no means confined to metabolic pathways; many pioneering experiments were conducted to characterize the primary photochemical events. The laboratory was one of the first two to apply the new method of electron para-magnetic resonance to photosynthetic systems, which showed there were two kinds of organic free radicals produced as a result of light absorption, one of which appeared to be either a one-electron reduced or oxidized chlorophyll species.[3]

Calvin was the sole recipient of the 1961 Nobel Prize for Chemistry for what is sometimes known as the Calvin–Benson–Bassham Cycle. Calvin wrote an autobiography three decades later titled Following the Trail of Light: A Scientific Odyssey. During the 1950s he was among the first members of the Society for General Systems Research. In 1963 he was given the additional title of Professor of Molecular Biology. In his final years of active research, he studied the use of oil-producing plants as renewable sources of energy. He also spent many years testing the chemical evolution of life and wrote a book on the subject that was published in 1969.

The entire effort that NASA mounted to search for life in extraterrestrial space was greatly influenced by Calvin’s participation and advice. His efforts included plans to protect the Moon against biological contamination from the Earth during the first lunar landing (Apollo) as well as procedures to protect the Earth from possible lunar pathogens on and in the returning Apollo spacecraft. Furthermore, strategies for the search for organic and biological compounds in returned lunar samples, and plans for the search for biological compounds for life on other planets.[4] From 1981 to 1985 he served on the top advisory body of the Department of Energy, the Energy Research Advisory Board.