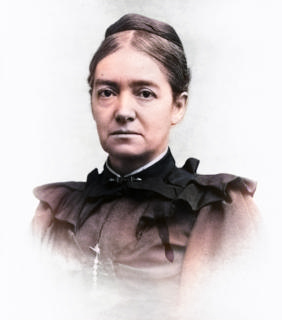 On August 31, 1842, American physician, writer and suffragist Mary Corinna Putnam Jacobi was born. Putnam Jacobi crusaded for the integration of clinical and laboratory studies. Disparaging anecdotal evidence and traditional approaches, she demanded scientific research on every question of the day. As a leading feminist, she rejected the traditional wisdom about the weaknesses of women. Her work with reformers and suffragists made her a leading spokesperson for women’s health.

Mary Putnam Jacobi was born in London, as the oldest daughter of eleven children to George Palmer Putnam and Victorine Haven Putnam, originally from New York City, but she spent her childhood and adolescence in New York City. At the beginning, Jacobi was mostly educated at home, and later attended a public school for girls. After her graduation in 1859, Mary Putnam Jacobi published her first story Found and Lost in an issue of the Atlantic Monthly. She still privately continued her studies in Greek, science, and medicine with Elizabeth Blackwell.[4] Even though Putnam Jacobi’s father first disliked his daughter’s interest in medicine. Only reluctantly he agreed to financially support Mary’s decision to pursue medicine, an ambition she had held since childhood.

During the Civil War, Mary Putnam Jacobi served as a medical aide. She graduated from the New York College of Pharmacy in 1863 and earned her M.D. from the Female Medical College of Pennsylvania in 1864. Putnam Jacobi completed an internship at the New England Hospital for Women and Children and realized she had to focus increasingly on her studies to be able to practice medicine. At the École de Médecine of the University of Paris, Putnam Jacobi was admitted as the first female student. This revolutionary development demanded much negotiation and the help of the psychiatrist Benjamin Ball. She graduated in July 1871, the second woman to get a degree there, and received second prize for her thesis with the title “De la graisse neutre et des acides gras” (Neutral fat and fatty acids).[14]

Mary Putnam Jacobi returned to the United States in the fall of 1871 and established a medical practice in New York City. She became the second woman member of the Medical Society of the County of New York, was admitted to the American Medical Association, and became a professor in the new Woman’s Medical College of the New York Infirmary. In 1873, she married Abraham Jacobi, a New York physician and researcher, nowadays often referred to as the “father of American pediatrics.”

The Question of Rest for Women during Menstruation

Throughout her career, Putnam Jacobi campaigned for medical schools to admit female students. She received Harvard University’s Boylston Prize in 1876 for an original essay, The Question of Rest for Women during Menstruation,[8] which debunked the theory that women who did not rest during menstruation would damage their reproductive organs. In 1891 she contributed a paper on the history of women physicians in the United States to the volume Women’s Work in America that included a bibliography of writings by American female physicians that mentioned over forty of her own works.

Jacobi wrote more than 100 medical papers. She stopped writing fiction in 1871. In 1894, she wrote Common Sense Applied to Women’s Suffrage which was later reprinted and used to support the women’s suffrage movement in the United States. Also in 1894, after the defeat of the women’s suffrage amendment to the New York State constitution, Jacobi was one of six prominent suffragists who founded the League for Political Education.

When she was diagnosed with a brain tumor, Mary Putnam Jacobi meticulously documented her own symptoms and published a paper on the subject titled, Description of the Early Symptoms of the Meningeal Tumor Compressing the Cerebellum. From Which the Writer Died. Written by Herself. She died in New York City on June 10, 1906, at age 63.