You are here: Home › archeology › Marc Aurel Stein and the Dunhuang Caves 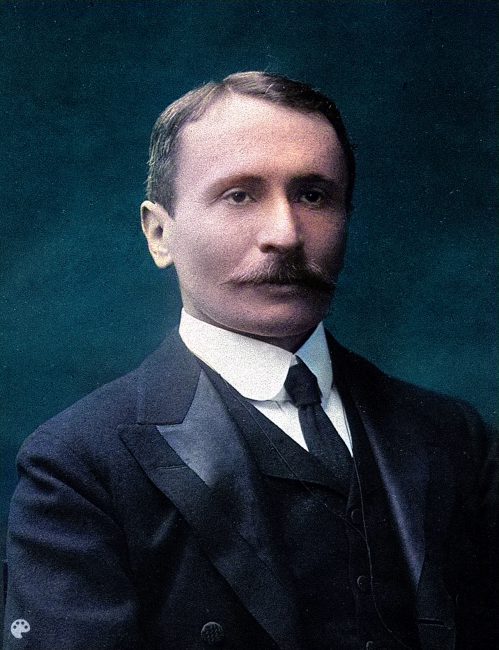 On November 26, 1862, Hungarian-British archaeologist Sir Marc Aurel Stein was born. Stein is primarily known for his explorations and archaeological discoveries in Central Asia. Stein was also an ethnographer, geographer, linguist and surveyor. His collection of books and manuscripts taken from Dunhuang caves is important for the study of the history of Central Asia and the art and literature of Buddhism. When the Dunhuang Caves, China, closed for centuries, were reopened, Stein discovered 15,000 manuscripts (1907), including the Diamond Sutra, reputed to be the first dated printed book (868 A.D.) [3].

“The name Martanda, in the form of Mnrtand or Matan, still attaches to the ruins though they have long ago ceaaed to be an object of religious interest. King Kalasa had sought this great fane at the approach of death, and expired at the feet of the sacred image (a.d. 1089). Harsa, his son, respected this temple in the course of the ruthless confiscations to which he subjected the other rich shrines of the country. Subsequently, in Kalhaua’s time the great quadrangular courtyard of the temple, with its lofty walls and colonnades, was used as a fortification. The destruction of the sacred image is ascribed to Sikandar Butshikast.”
— Marc Aurel Stein, Kalhana’s Rajatarangini Vol 2 , 1900.

Marc Aurel Stein was born to Náthán Stein and Anna Hirschler, a Jewish couple residing in Budapest in the Kingdom of Hungary. His parents and his sister retained their Jewish faith but Stein and his brother, Ernst Eduard, were baptised as Lutherans. He was educated in Greek, Latin, French, and English before going on for advanced study at Universities of Vienna, Leipzig and Tübingen. He graduated in Sanskrit and Persian Language and received his Ph.D. from Tübingen in 1883. Already one year later, he went to England to study oriental languages and archaeology. Stein became a British citizen and also received British sponsorship for his expeditions. In India, Stein joined the Punjab University as Registrar and later, between 1888 and 1899, he was the Principal of Oriental College, Lahore.

Aurel Stein made four major expeditions to Central Asia in 1900–1901, 1906–1908, 1913–1916 and 1930. Stein was influenced by Sven Hedin’s work Durch Asiens Wüsten. Drei Jahre auf neuen Wegen in Pamir, Lop-nor, Tibet und China (Through Asia’s deserts. Three years on new paths in Pamir, Lop-nor, Tibet and China), published in 1899.[4] The explorer managed to bring light to the hidden treasure of a great civilization which by then was practically lost to the world. One of his significant finds during his first journey during 1900–1901 was the Taklamakan Desert oasis of Dandan Oilik where he was able to uncover a number of relics. During his third expedition in 1913–1916, he excavated at Khara-Khoto. The British Library’s Stein collection of Chinese, Tibetan and Tangut manuscripts, Prakrit wooden tablets, and documents in Khotanese, Uyghur, Sogdian and Eastern Turkic is the result of his travels through central Asia during the 1920s and 1930s. Stein discovered manuscripts in the previously lost Tocharian languages of the Tarim Basin at Miran and other oasis towns, and recorded numerous archaeological sites especially in Iran and Balochistan. When Stein visited Khotan he was able to render in Persian a portion of the Shahnama after he came across a local reading the Shahnama in Turki. 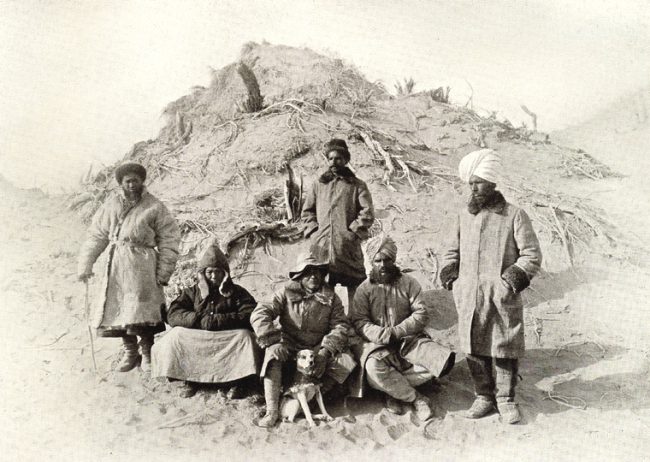 Photograph of Aurel Stein, with his dog and research team, in the Tarim Basin

However, Aurel Stein’s greatest discovery was made at the Mogao Caves also known as “Caves of the Thousand Buddhas”, near Dunhuang in 1907. It was there that he discovered a printed copy of the Diamond Sutra, the world’s oldest printed text, dating to AD 868, along with 40,000 other scrolls which were all removed by gradually winning the confidence and bribing the Taoist caretaker. Stein managed to acquire 24 cases of manuscripts and 4 cases of paintings and relics. 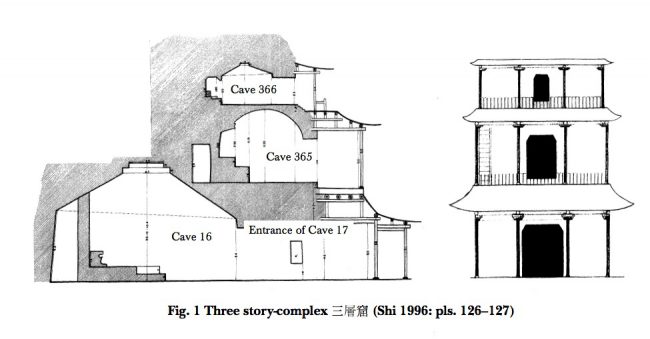 Aurel Stein was knighted for his efforts, however, Chinese nationalists dubbed him a burglar and staged protests against him. Stein was further awarded the Founder’s Medal by the Royal Geographical Society ‘for his extensive explorations in Central Asia, and in particular his archaeological work‘. Next to several further gold medals, Stein received the first Campbell Memorial Gold Medal by the Royal Asiatic Society of Bombay. In 1921 he was elected to the British Academy and in 1930 to the American Academy of Arts and Sciences.