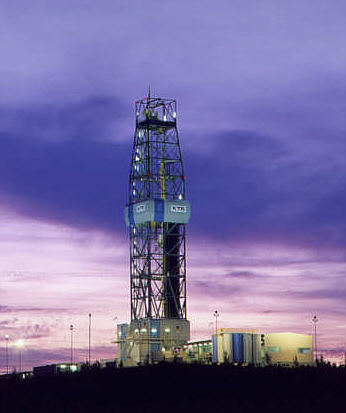 On October 12, 1994, the German Continental Deep Drilling Programme near Windischeschenbach, Bavaria, ended at a depth of 9,101 metres in the Earth’s continental crust, one of the deepest drilling projects in the world.

The objective of the continental deep drilling program (CDDP), which comprised many individual scientific projects, was above all the precise exploration of the earth’s crust. To this end, special drilling and monitoring technology also had to be developed and tested. The CDDP was the first major German project in basic geoscientific research. The plan was to drill to a depth where the temperature would be 300 °C, since the electronic measuring devices (magnetic field, temperature, etc.) would only work up to this temperature. At least 8000 meters depth and 250 °C should be reached. The decisive factor for the choice of the site in the Upper Palatinate over a site in the Black Forest, which was considered equivalent from the point of view of the possible gain in geological knowledge right up to the end, was that the critical temperature of 300 °C was not expected in the Upper Palatinate until a depth of about twelve kilometers, five kilometers deeper than in the Black Forest.

In October 1986 the German Minister for Research and Technology (Bundesminister für Forschung und Technologie), Heinz Riesenhuber, officially announced that the super-deep borehole of the Continental Deep Drilling Program of the Federal Republic of Germany (KTB) would be drilled in the Upper Palatinate area of Northern Bavaria. Between September 1987 and April 1989, a pilot borehole was drilled to a depth of 4,000 meters. The findings of the pilot borehole determined the technical concept of the main borehole. This also revealed a significantly higher temperature gradient than expected.

The main well, which was drilled from September 8, 1990, at a distance of 200 meters, was therefore to reach only slightly above 10,000 meters. Here, only below 4,000 meters, a total of 35 isolated core samples were taken, but the drill cuttings were continuously examined. In order to limit the friction of the drill string so that the planned depth could be reliably reached at all, a self-steering vertical drill head was used up to 7,500 meters, with which the lateral deviation could be limited to 12 meters. Due to the expected temperature-related failure of the electronics, conventional drilling had to be continued below this depth. From this depth, the rock was in the brittle-ductile transition zone, so that the borehole was partially deformed by differently directed horizontal stresses. The drill got stuck several times and had to be reset after backfilling the borehole piecemeal. These operations took approximately one year to complete. Budget and associated time constraints were ultimately the deciding factor in the completion of the well.

The main well of the Continental Deep Drilling Program was completed on October 12, 1994, after 1468 days at a depth of 9,101 meters, approximately 300 meters of lateral deviation, and a temperature of 265 °C.

The results led to a broad recognition of the zonal structure or the paleoplate configuration postulated based on it in the central European part of the Variscan basement (the deep borehole is located in the suture zone of several formerly separate lithospheric plates). The more rapid increase in temperature with increasing depth fits well with the strong structuring of the overall geologic system evident from this image. At the same time, the temperature limitation of ≈ 300 °C meant that only 75% of the original hoped-for depth of 12 km was reached. The technology push by the project has increased even more as a result.

Individual results include, for example, the realization that the rock has fractures down to great depths and that deep waters are thus significantly more mobile than initially suspected. This should be taken into account, for example, in the planning of deep storage facilities for radioactive waste. The preliminary drilling already showed an anomalously strong increase in the magnetic field, which was interpreted as the result of a deep-seated, previously unsuspected magnetized area and was then also drilled in the main borehole. Great progress was also made in the joint interpretation of different borehole logging methods, the results of which could be checked against cores and cuttings. The joint interpretation of surface and borehole measurements provided improved methods, e.g. in the field of seismics, geoelectrics, magnetotellurics, magnetics and in earthquake monitoring.

The deep drilling program produced extensive new findings on the Earth’s crust, some of which contradicted recognized hypotheses. The successor to the program is the International Continental Scientific Drilling Program (ICDP).[5] From 1996 to 2001, the GeoForschungsZentrum Potsdam (GFZ) operated a deep observatory at the site, which oversaw the continued scientific use of the two boreholes as part of the ICDP. Since then, the land and building have been owned by the GEO-Zentrum Foundation at KTB, which has operated the GEO-Zentrum, a public information and education facility, since 1998. Visitors can tour what is still the world’s largest land drilling rig and are informed about current geoscientific and geotechnical topics at events and special exhibitions. Scientific use of the two boreholes is also still possible.