You are here: Home › literature › The Sensibility of Friedrich Gottlieb Klopstock 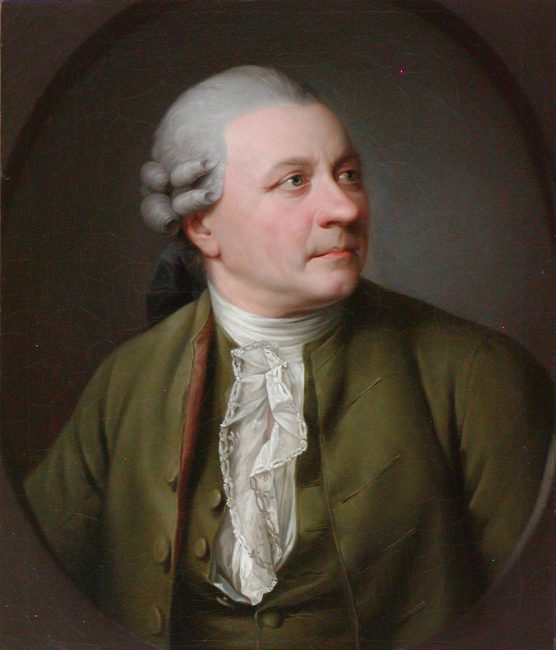 On July 2, 1724, German poet Friedrich Gottlieb Klopstock was born. One of his major contributions to German literature was to open it up to exploration outside of French models. Klopstock is considered an important representative of sensibility.

“The God who created these fair heavens with the same facility as yon green sapling; he who hath bestowed on man a life of toil, of transient joys and fleeting pains, that he might not forget the higher worth of his enduring soul, and might feel that immortality waited for him beyond the grave;—He, he is one only God!”
– Friedrich Gottlieb Klopstock, The Messiah, VII. 460;

Friedrich Gottlieb Klopstock grew up as the oldest of 17 children in a pietist family. His father, Gottlieb Heinrich, the son of a lawyer, was a princely Mansfeld commission councilor and had leased the Friedeburg estate in the county of Mansfeld,  in the northern part of the Hassegau on the eastern edge of the Harz Mountains in Upper Saxionia, so that Friedrich Gottlieb spent his childhood here. His mother Anna Maria had the Langensalza council chamberlain and merchant Johann Christoph Schmidt for a father. After attending the Quedlinburg Gymnasium, Friedrich Gottlieb Klopstock entered the Fürstenschule in Schulpforte at the age of 15, where he received a thorough humanistic school education. Here he also made his own first poetic attempts and wrote a first plan for the Messiah, a religious epic. 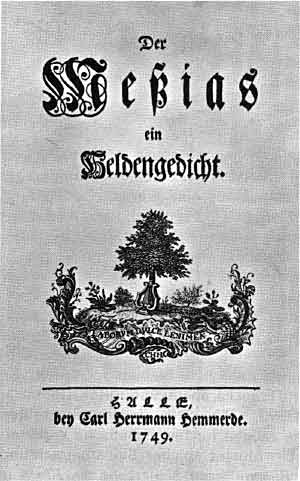 In 1745, Klopstock began studying Protestant theology at the university of Jena, where he also wrote the first three cantos of Messiah, initially in prose. After moving to Leipzig, the work was reworked into hexameter the following year. The appearance of the first parts in 1748 in the Bremer Beiträge (“Bremen Contributions“) caused a great sensation and became the model for the Messiad literature of his era. The poem consists of 19,458 dactylic hexameters, as compared with the 15,693 of Homer’s Iliad. The project reflected the influence of Johann Jakob Bodmer’s translation of John Milton’s Paradise Lost, which Klopstock had read at the school. The poem became regarded in some circles as equal to the epics of Dante and Milton, especially by women and religious people.

The theme of the poem is the redemption of mankind, and the poem starts with Jesus’s entry into Jerusalem on Palm Sunday. Klopstock’s work shows he learned much from Milton. However, instead of strong contrasts, going from darkness to light, from misery to bliss, Klopstock attempts to portray a mental state of continuous, dazzling brilliancy. Instead of an alternation of clashes, there is contemplation. In using hexameters for his verse, Klopstock had abandoned the traditional Alexandrines. This loosed a storm of criticism on his head from the school of Johann Christoph Gottsched, who ridiculed what he called Klopstock’s “seraphic spirit of fanaticism“, his strictures on Gottsched’s dogmatism, his effeminate and morbid tenderness, and his religious sentimentality. These criticisms were later confirmed by Lessing, although in a milder and more dignified spirit.

Klopstock also wrote his first odes in Leipzig. After completing his theological studies, he accepted (according to the custom of all theology candidates) a position as a tutor in Langensalza. During the two years of his stay in Langensalza, Klopstock experienced the passionate love for the girl Maria-Sophia Schmidt, the intoxication of hope, the disappointment and finally the elegy of renunciation. This led him to write the most beautiful of his earlier odes for the unapproachable lover during these two years. The publication of the odes ignited a storm of enthusiasm among the opponents of Johann Christoph Gottsched’s “reasonable” poetics, which had prevailed until then. It was the birth of pure poetry.

Contacts were made with Johann Jakob Bodmer, who invited Klopstock to Zurich, where he traveled in 1750. After eight months, he went to Denmark at the invitation of King Frederick V. Thanks to Frederick’s support, he was able to complete his work. The latter granted him a life pension of 400 (later 800) talers annually. He spent three years of his life in Denmark. On June 10, 1754, Klopstock married Margareta (Meta) Moller, whom he had met in Hamburg in 1751 on his way to Copenhagen. She died in a stillbirth on November 28, 1758. For thirty years Klopstock could not forget her and sang about her in his elegies. It was not until his old age (1791) that he married the Hamburg woman Johanna Elisabeth Dimpfel, widowed von Winthem (1747-1821), who was a niece of Meta Moller.

From 1759 to 1762 Klopstock lived in Quedlinburg, Brunswick, and Halberstadt, then traveled to Copenhagen, where he remained until 1771 and exerted a great influence on cultural life in Denmark. In addition to Messiah, which finally appeared in its entirety in 1773, he wrote dramas, including Hermann’s Battle (1769). He then turned his attention to Hamburg. In 1776, at the invitation of Margrave Karl Friedrich of Baden, he moved temporarily to Karlsruhe. After his death on March 14, 1803, at the age of 78, he was buried next to Meta in the cemetery of the Christianskirche in Ottensen on March 22, 1803, with great public participation.

Klockstock on Nationalism and Revolution

As a father of German nation-state thought, Klopstock was a proponent of the French Revolution, which he called “the noblest deed of the century” in the 1789 poem Kennet euch (Know Yourselves); Klopstock also called Germans to revolution. In 1792, the French National Assembly accepted him as an honorary citizen. Later, however, he castigated the excesses of the Revolution in the 1793 poem The Jacobins, where he criticized the Jacobin regime that had emerged from the French Revolution as a snake winding its way through all of France.

Klopstock’s enlightened utopia The German Scholars’ Republic (1774) is a concept that places an educated elite in power for the rule of princes, who are considered incapable of governing. The republic is to be governed by “aldermen,” “guilds,” and “the people,” with the former – as the most learned – to have the greatest powers, guilds and people correspondingly less. The “rabble,” on the other hand, would at most get a “screamer” in the Diet, for Klopstock did not trust the people with popular sovereignty. Education is the highest good in this republic and qualifies its bearer for higher offices. In keeping with the scholarly approach, things are extremely pacifistic in this republic: Klopstock estimates the punishments between scholars to be snorting, sneering and frowning.

An Impetus to German Language

Klopstock gave new impetus to the German language and can be regarded as a pioneer for the generation that followed him. He was the first to use hexameter in German poetry with his Messiah, and his exploration of “German hexameter,” as he called it, led him to his doctrine of the word foot. This paved the way for free rhythms, such as those then used by Goethe and Hölderlin. Klopstock is considered the founder of experiential poetry and German irrationalism. His work spanned large parts of the epoch of the Enlightenment. However, he was not committed to reason like most of the Enlightenment thinkers, but is counted among the so-called Empfindsamkeit (Sensibility). In 1779, he coined the concept of inwardness, which he described as one of nine elements of poetic representation: “Inwardness, or bringing out the actual innermost nature of the thing.” Furthermore, he is considered an important pioneer for the Sturm und Drang movement