You are here: Home › explorer › Lost on Mars – The Ill Fate of the Beagle 2 Space Mission 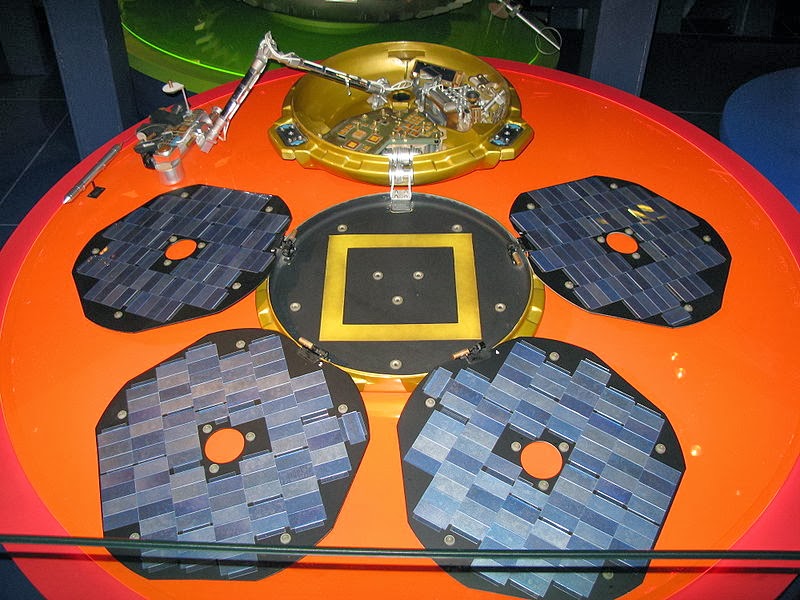 On February 11, 2004, the British Mars landing spacecraft Beagle 2 that formed part of the European Space Agency’s 2003 Mars Express mission was abandoned due to all contact with it was lost.

“HMS Beagle was the ship that took Darwin on his voyage around the world in the 1830s and led to our knowledge about life on Earth making a real quantum leap. We hope Beagle 2 will do the same thing for life on Mars” (Professor Colin Pillinger).[5]

Beagle 2’s landing site was quickly chosen to be Isidis Planitia, which is the third biggest obvious impact structure on the planet after the Hellas and Argyre basins with a diameter of about 1,500 km. The original objectives were to characterize the landing site’s geology, mineralogy, geochemistry and oxidation state. Also, the atmosphere and surface layers were to be studied during the mission in order to search for possible signatures of present or past life on Mars.

The spacecraft was controlled from the Lander Operations Control Centre in Leicester. Beagle 2 itself was equipped with a robotic arm, which was designed to extend after the landing. Several cameras were installed as well as spectrometers and a drill for collecting rock samples. The scientists hoped to find carbon or methane while analyzing the samples, which would have revealed whether they contained remnants of living organisms.

In June 2003, Mars Express launched and the lander was released from the orbiter in December. The lander was planned to enter the Martian atmosphere on December 25. At about 200m above Mars’ surface, parachutes were to be deployed and airbags were to inflate to protect the craft. It was planned that Beagle 2’s top was to open in order to contact Mars Express right after the landing and again the next morning in order to assure that it ‘survived’ the night. The scientists scheduled big panorama shots right after the landing and Beagle 2 was thought to crawl across the surface for the first time.

But unfortunately, not all of this happened quite as planned. Indeed, Beagle 2 was successfully deployed from Mars Express, but the confirmation of the successful landing never occurred. It was attempted to have the Lovell Telescope pick up a signal from Beagle 2, but again the team was not lucky. The year 2004 came and still, there was no sign of ‘life’ from the lander. On 6 February 2004, Beagle 2 was declared lost. Officials assumed that Beagle 2 may have landed in a crater, but were proven wrong a few years later. The Beagle 2 mission was announced a complete failure while the Mars Express mission itself became a success.

In 2004, an inquiry report for the Beagle 2 mission was published. In it, the responsible scientists assumed for instance, that the lander could have burnt up due to the fact that the high amount of dust in the atmosphere may change its density and temperature quickly. A further assumption was, that the probe’s parachutes failed to open or opened too late or that Beagle 2 was entangled with the parachutes. Numerous possible scenarios were listed in the report and Leicester University published their own very detailed mission report with further failure modes and learned lessons.

The Beagle 2 mission was an ambitious European project that was implemented under enormous time pressure with a comparatively small budget of only 30 million euros. The mission was a risky project in two senses. On the one hand, ESA had no experience with probe landings, and on the other hand, it had never been attempted before to bring an orbiter (Mars Express) and a lander (Beagle 2) to Mars with just one mission. During the decoupling manoeuvre, the Mars Express mother probe had collision course with Mars and could not receive orders from ESA’s European Space Operations Centre (ESOC) because its antenna could not be directed to Earth during this manoeuvre.

As of May 2021, there have been six successful robotically operated Mars rovers; the first five, managed by the American NASA Jet Propulsion Laboratory, were (by date of Mars landing): Sojourner (1997–1997), Opportunity (2004–2018), Spirit (2004–2010), Curiosity (2012–), and Perseverance (2021–). The sixth, managed by the China National Space Administration, is Zhurong (2021–). The Soviet probes, Mars 2 and Mars 3, were physically tethered probes; Sojourner was dependent on the Mars Pathfinder base station for communication with Earth; Opportunity, Spirit and Curiosity were on their own. As of February 2022, Curiosity is still active, while Spirit, Opportunity, and Sojourner completed their missions before losing contact. On February 18, 2021, Perseverance, the newest American Mars rover, successfully landed. On May 14, 2021, China’s Zhurong became the first non-American rover to successfully operate on Mars.