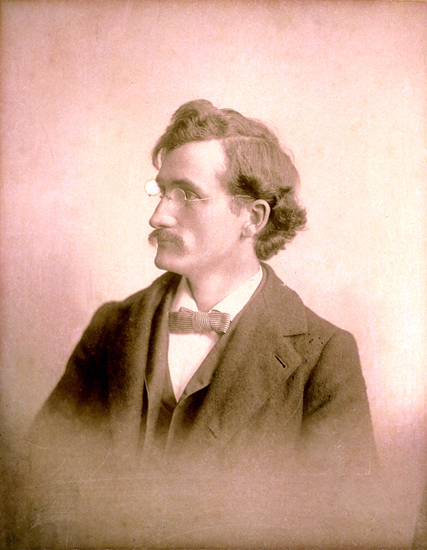 On December 25, 1954, American horticulturist and botanist Liberty Hyde Bailey passed away. Bailey helped to create the science of horticulture. He made systematic studies of cultivated plants, and advanced knowledge in hybridization, plant pathology, and agriculture. He was a recognized authority on sedges, tropical palms, blackberries, grapes, cabbages, pumpkins and squashes, among others. He is particularly notable for his great encyclopedias (Cyclopedia of American Agriculture, in four volumes, 1907-9) and important manuals (Cyclopedia of Horticulture in six volumes).

“A garden requires patient labor and attention. Plants do not grow merely to satisfy ambitions or to fulfill good intentions. They thrive because some one expended effort on them.”
— Liberty Hyde Bailey, as quoted in [9]

Liberty Hyde Bailey was born in 1858 as the third son of the farmer Liberty Hyde Bailey Senior and his wife Sarah Harrison Bailey in South Haven (Michigan). His mother died of scarlet fever as early as 1862, and his father subsequently married Maria Bridges in his second marriage. His father was a very innovative farmer and operated one of the first commercial orchards in the area. He won several awards for outstanding management of his acreage and cultivated more than 300 varieties of apples. Liberty Hyde Bailey Jr. learned to graft fruit trees as a youth. He and his father were members in the South Haven Pomological Society. His stepmother and the pastor of his hometown encouraged his education, so that after graduating from the local school in 1877, he was able to leave the farm to study agriculture at Michigan Agricultural College (now Michigan State University). Due to an illness, he had to interrupt his studies for a year during the academic year 1880/81. He listened to lectures by William James Beal (1833-1924), who was one of the first botanists to use living plants and practical exercises as illustrative material for his lectures. Bailey thus developed a special interest in botany during his studies.

After graduating with a Bachelor of Science degree in 1882, he first worked for a short time as a reporter for the Morning Monitor in Springfield, Illinois, before obtaining a position as assistant to the noted botanist Asa Gray (1811 – 1888) at Harvard University in February 1883 through the recommendation of William Beal. He worked for Gray for two years, for whom he systematically arranged and botanically classified the pressed plants in a large collection from Kew Garden in London.

Around 1885, Bailey moved to Cornell University in Ithaca, New York where he assumed the chair of Practical and Experimental Horticulture. Liberty Bailey founded the College of Agriculture and he became dean of what was then known as New York State College of Agriculture from 1903-1913. During the late 1910s, president Theodore Roosevelt appointed Bailey Chairman of The National Commission on Country Life. In 1917 Liberty bailey was elected a member of the United States National Academy of Sciences.

Liberty Hyde Bailey was the founding editor of the journals Country Life in America and the Cornell Countryman. He authored more than 60 books in the field of horticultural literature. His most significant and lasting contributions were in the botanical study of cultivated plants. Bailey had a vision of integrating expert knowledge of horticulture into a broader context of democratic community action. As a leader of the Country Life Movement, he strove to preserve the American rural civilization, which he thought was a vital and wholesome alternative to the impersonal and corrupting city life. Liberty Bailey initiated reforms and wrote the work Mother Earth which conformed largely to the Freemason creed that Bailey had been brought up with, and it was not explicit in demanding that traditional Christian dogma be discarded.

Bailey’s agrarian thought pointed towards a new direction, he saw technological innovation as friendly to the family farm and inevitably resulting in decentralization. He wanted to cut relief farmers from old restraints and he supported neighborhood and community groups. However, due to the support of the rural civilization as well as technology, Bailey faced an overproduction of farm products. Liberty Bailey then chose to preserve technology rather than the family farms and retreated from the Country Life movement into scientific study. Liberty Bailey had a significant influence on modern American Agrarianism even though the inherent contradictions of his ideas have been equally persistent, including the tension between real farmers and rural people and the Country Life campaign, and the difficulties to understand the operative economic forces.

Bailey retired in 1913, but continued to work intensively on botanical systematics and taxonomy. Between 1923 and 1943, he published more than 100 scientific articles, including taxonomic revisions of various genera. He led a very active life until his death on December 25, 1954, making numerous botanical research trips, some accompanied by his daughter Ethel Zoe.