You are here: Home › archeology › Lawrence of Arabia – The Man and the Myth 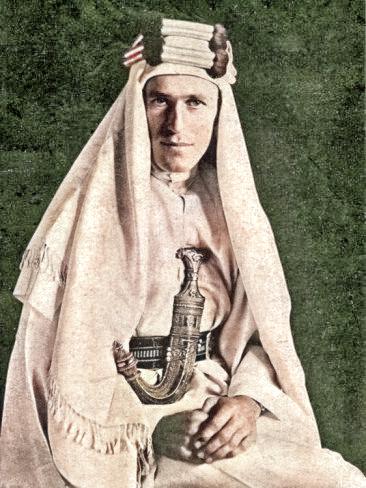 On May 19, 1935, archaeologist and British Army officer Thomas Edward Lawrence died fatally injured in a motorcycle accident in Dorset. Renowned especially for his liaison role during the Sinai and Palestine Campaign, and the Arab Revolt against Ottoman Turkish rule of 1916–18. The breadth and variety of his activities and associations, and his ability to describe them vividly in writing, earned him international fame as Lawrence of Arabia.

“All men dream: but not equally. Those who dream by night in the dusty recesses of their minds wake in the day to find that it was vanity: but the dreamers of the day are dangerous men, for they may act their dreams with open eyes, to make it possible. This I did.”
–T. E. Lawrence, The Seven Pillars of Wisdom, 1922

Thomas Edward Lawrence was born in 1888 in Tremadog, Caernarfonshire. He attended the City of Oxford High School for Boys and then became commissioned officer in the Church Lads’ Brigade at St Aldate’s Church. At his own claim, Lawrence ran away in 1905 serving for a few weeks as a boy soldier with the Royal Garrison Artillery at St. Mawes Castle in Cornwall. However, the sources differ on this matter. Lawrence studied History at Jesus College, Oxford and set out on a three-month walking tour of crusader castles in Ottoman Syria in 1909 during which he travelled 1,000 miles. Lawrence was then offered the opportunity to become a practising archaeologist in the Middle East, at Carchemish in the expedition which D. G. Hogarth was setting up on behalf of the British Museum. He came back to Carchemish several times working on excavations. In the mid-1910s, along with aerchaeologist Leonard Woolley, Lawrence was active for a British military survey of the Negev Desert and they published a report on their archaeological findings and the updated maps of the area.

The Outbreak of the Arab Revolt

At the outbreak of the Arab Revolt, Lawrence was a university post-graduate researcher who had for years travelled extensively within Ottoman Empire provinces of the Levant and Mesopotamia under his own name. With his first-hand knowledge of Syria, the Levant, and Mesopotamia on his formal enlistment in 1914 Lawrence was posted to Cairo on the Intelligence Staff of the GOC Middle East. The British government in Egypt sent Lawrence to work with the Hashemite forces in the Arabian Hejaz in October 1916. It is believed that Lawrence fought alongside Arab irregular troops under the command of Emir Faisal, a son of Sharif Hussein of Mecca, in extended guerrilla operations against the armed forces of the Ottoman Empire. To his major contribution to the revolt belongs his ability to convince the Arab leaders to co-ordinate their actions in support of British strategy.

In 1917, Lawrence went off on his first desert raid with 35 armed tribesmen. The group rode their camels out of camp, dismounted and scrambled up a steep hill overlooking a Turkish encampment, which they peppered with rifle fire until driven off. As they returned, Lawrence and his men came across two Turks relieving themselves and managed to take them back for questioning. Lawrence’s first raid against the railway, a Turkish station at Abu el-Naam at the end of March 1917 was also successful and their attacks on the railway continued throughout the year. In the Battle of Aqaba, Lawrence arranged a joint action with the Arab irregulars and forces including Auda Abu Tayi against the strategically located but lightly defended town of Aqaba.

In July, Aqaba fell to Lawrence and the Arab forces and Lawrence was promoted to major. He was awarded another promotion after the Battle of Tafileh in 1918. He was also involved in the build-up to the capture of Damascus in the final weeks of the war. However Lawrence and his men arrived several hours after the city had fallen. He then played a major role in attempting to establish a provisional Arab government under Faisal. However, Faisal’s rule as king came to an abrupt end in 1920, after the battle of Maysaloun. The French Forces of General Gouraud, under the command of General Mariano Goybet, entered Damascus, and destroyed Lawrence’s dream of an independent Arabia. 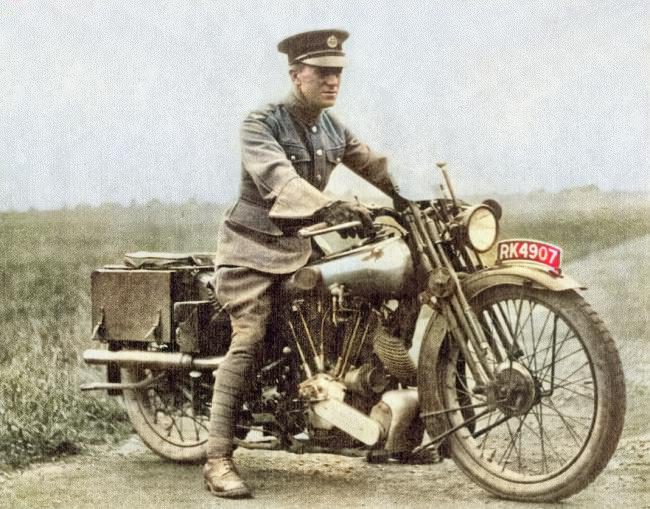 Lawrence on the Brough Superior SS100 that he called “George V”

After the war, Lawrence, now a full colonel, returned to the United Kingdom and started working for the foreign Office. Lowell Thomas launched a photo show titled ‘With Allenby in Palestine‘ in which Lawrence played a supporting role. However, Lawrence’s photos dressed as a Bedouin became very popular and they decided to do another photoshoot in Arab dress. The show was relaunched and now titled ‘With Allenby in Palestine and Lawrence in Arabia‘ and it became extremely popular. In the early 1920s, it is known that Lawrence served as an advisor to Winston Churchill and that he enlisted in the Royal Air Force under various false names.

During his lifetime, Lawrence published three major writings. The most significant is probably his account of the Arab Revolt, ‘Seven Pillars of Wisdom‘. In addition to being a memoir of his experiences during the war, certain parts also serve as essays on military strategy, Arabian culture and geography, and other topics. Another important writing was Lawrence’s ‘Revolt in the Desert‘ was an abridged version of Seven Pillars that he began in 1926 and that was published in March 1927. Lawrence acknowledged having been helped in the editing of the book by George Bernard Shaw.[4] In the preface to Seven Pillars, Lawrence offered his “thanks to Mr. and Mrs. Bernard Shaw for countless suggestions of great value and diversity: and for all the present semicolons“. Lawrence was afraid that the public would think that he would make a substantial income from the book, and he stated that it was written as a result of his war service. He vowed not to take any money from it. This, along with his “saintlike” generosity, left Lawrence in substantial debt. With ‘Revolt in the Desert’ he undertook a needed but reluctant publicity exercise, which resulted in a best-seller.

John Calvert, T.E. Lawrence, the Arab Revolt and WWI in the Middle East, [10]