You are here: Home › biology › Karl Gegenbaur and the Study of Comparative Anatomy 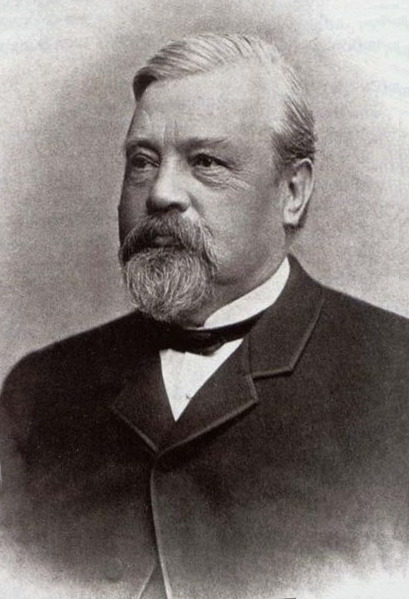 On August 21, 1826, German anatomist Karl Gegenbaur was born. Gegenbaur demonstrated that the field of comparative anatomy offers important evidence supporting of the theory of evolution. He was a strong supporter of Charles Darwin‘s theory of organic evolution, having taught and worked, beginning in 1858, with Ernst Haeckel.[6] Karl Gegenbaur noted that the most reliable clue to evolutionary history is homology, the comparison of anatomical parts which have a common evolutionary origin. Interesting side note, Gegenbauer was born in Würzburg, a town pretty close to my original hometown in Lower Franconia, Bavaria. Later he was professor at the University of Jena, where I spent my first years as postdoc. Thus, today we are up for a little ‘local history’.

Growing Up in Würzburg

Karl Gegenbaur was born in Würzburg, Lower Franconia, Bavaria in 1826, the son of Franz Joseph Gegenbaur, a judicial officer, and his wife Elisabeth Karoline (née Roth). In 1838 he attended grammar school and graduated from Gymnasium Würzburg in 1845 with his Abitur. Even at school, Gegenbaur was very much interested in natural studies in the surroundings of Würzburg. He collected plants and rocks, made sketches of animals and performed first dissections on animals.

Gegenbaur entered the University of Würzburg in 1845 to study medical and natural sciences under Albert von Kölliker (1817–1905) and Rudolf Virchow (1821–1902). He graduated in 1851 as Dr. med. with a thesis on “De limacis evolutione“. After taking his degree, Gegenbaur spent some time travelling, starting with visiting famous anatomist and physiologist Johannes Müller in Berlin and following his advise to study the maritime life of Helgoland by himself. He continued his travels in 1852, following Albert von Kölliker [4] and Heinrich Müller to Italy and Sicily to deepen his studies in comparative anatomy. In 1854, Gegenbauer finished his habilitation to become Privatdozent in Würzburg. In 1855, he was appointed extraordinary professor of anatomy at the University of Jena, and in 1858, he became the ordinary professor, where after 1865, his former student and fellow-worker Ernst Haeckel was professor of zoology. In 1873, Karl Gegenbaur was appointed to Heidelberg, where he was professor of anatomy and director of the Anatomical Institute until his retirement in 1901. He died on 14 June 1903, at Heidelberg.

Diagram of the skulls of a Monitor lizard and a Crocodile with homologous bones coloured the same colours.

The work by which Gegenbaur is best known is his Grundriss der vergleichenden Anatomie (1859, Elements of Comparative Anatomy) of evolutionary morphology, emphasizing that structural similarities in different animals constitute clues to their evolutionary history.[2] While recognizing the importance of comparative embryology in the study of descent, Gegenbaur laid stress on the higher value of comparative anatomy as the basis of the study of homologies, i.e. of the relations between corresponding parts in different animals, as, for example, the arm of man, with the foreleg of a horse, and with the wing of a fowl. A distinctive piece of work was effected by him in 1871 in supplementing the evidence adduced by English anatomist Thomas Huxley in refutation of the skull-vertebrae theory: the theory of the origin of the skull from expanded vertebrae, which, formulated independently by German poet and natural scientist Johann Wolfgang von Goethe [5] and German ornithologist and anatomist Lorenz Oken, had been championed by comparative anatomist Richard Owen [1]. Huxley demonstrated that the skull is built up of cartilaginous pieces; Gegenbaur showed that in the lowest (gristly) fishes, where hints of the original vertebrae might be most expected, the skull is an unsegmented gristly brain-box, and that in higher forms, the vertebral nature of the skull cannot be maintained, since many of the bones, notably those along the top of the skull, arise in the skin.

In 1858, the physician Ernst Haeckel [6] studied under Gegenbaur at Jena, receiving a doctorate in zoology, and became a professor at the same institution, the University of Jena. Ernst Haeckel expanded on the ideas of Gegenbaur while advocating the concepts of Charles Darwin.

In 1861, Gegenbaur published “Ueber den Bau und die Entwickelung der Wirbelthier-Eier mit partielleer Dotterbildung” (“Proof that the ovum is unicellular in all vertebrates)”, a fundamental proof in embryology, in which Gegenbaur confirmed German zoologist Theodor Schwann’s hypothesis that all eggs and sperm are single cells.[2] His research program of comparative morphology incorporating ontogeny and phylogeny is still evident in the burgeoning field of evolutionary developmental biology (evo-devo).

At yovisto academic video search you may learn more about the future of the Science of Anatomy in a lecture by Jack Choi.