You are here: Home › biology › John Muir and the U.S. National Park System 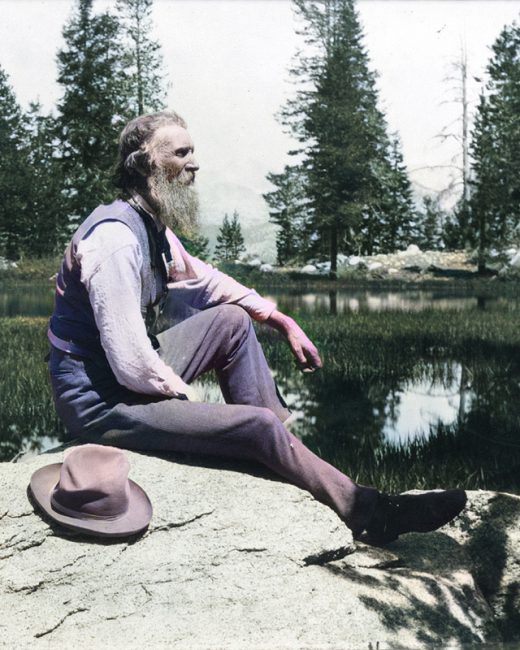 On April 21, 1838, Scottish-American naturalist and author John Muir was born. He was an early advocate of preservation of wilderness in the United States. His letters, essays, and books telling of his adventures in nature, especially in the Sierra Nevada mountains of California, have been read by millions. His activism helped to preserve the Yosemite Valley, Sequoia National Park and other wilderness areas.

John Muir was born 8 in Dunbar, Scotland, the third of eight children. He attended school in Dunbar, where he also learned Latin and French, and had to learn Bible verses by heart every day. Muir’s family emigrated to the United States in 1849 and started a farm in Wisconsin. John Muir left the farm when he was around 23 years old to study at the University of Wisconsin–Madison. Even though he never graduated, he learned much about botany, chemistry, and geology. It is believed that Muir left school to travel to Southern Ontario in 1864, exploring the woods and swamps, and collecting plants around the southern reaches of Lake Huron’s Georgian Bay. His brother persuaded him to gather near Meaford, Ontario and work together at a saw mill and rake factory, where he continued to explore the area and catalogue plants. Back in the United States, John Muir settled in Indianapolis to work as a sawyer in a wagon wheel factory. Unfortunately, during an accident in 1867, Muir hurt his left eye and the right eye also temporally failed. He was basically blind for several weeks and when he gained his sight back, “he saw the world — and his purpose — in a new light“. He was then confident to devote his life to exploration and the study of plants.

John Muir then probably walked from Indiana to Florida which he recounted in his book ‘A Thousand-Mile Walk to the Gulf’. Presumably in January 1868, he boarded a ship to Havana, Cuba where he studied shells and flowers and visiting the botanical garden in the city. Muir then sailed to New York and booked passage to California. John Muir would later famously, and perhaps apocryphally, recall that after hopping off the boat in San Francisco on March 28, 1868, he asked a carpenter on the street the quickest way out of the chaotic city. “Where do you want to go?” the carpenter replied, and Muir responded, “Anywhere that is wild.” Muir started walking east. When Muir arrived at Yosemite, it is believed that he stayed for about ten days and returned to the coast to find work. [1]

It is further believed that around June 1869, he signed on as a shepherd to take a flock of 2,000 sheep to Tuolumne Meadows in the High Sierra. He wrote about the adventure in his book ‘My First Summer in the Sierra’. He decided to stay in the valley full time and ran a sawmill James Hutchings, proprietor of the Hutchings House hotel. He constructed his cabin by Yosemite Creek and lived there for almost a year. Despite enjoying the beauty of nature around him, Muir still missed his family, “I find no human sympathy,” he wrote, “and I hunger.” After abruptly leaving Yosemite in late 1870, John Muir returned, spending 22 months there. He made detailed studies of the valley’s geology, plants and animals, including the water ouzel, or dipper, a songbird that dives into swift streams in search of insects. He was told to leave his cabin in 1871 and built himself a small study in the sawmill under a gable reachable by ladder. He called this place his “hang-nest” and surrounded the plant specimens he found at Yosemite there. Muir also filled several journals with his numerous observations of the nature and geology. Around that period, his first article was also published in the New York Tribune. It is believed that Ralph Waldo Emerson spent much time talking to Muir about botanical questions. However, more and more, Muir felt the urge to protect the wilderness. [3] He wrote for outdoor magazines and continued to visit Yosemite regularly. Along with Robert Underwood Johnson, an editor of Century magazine, he worked out a plan to create a 1,200-square-mile Yosemite National Park, a proposal Congress passed the following year. [1,2] 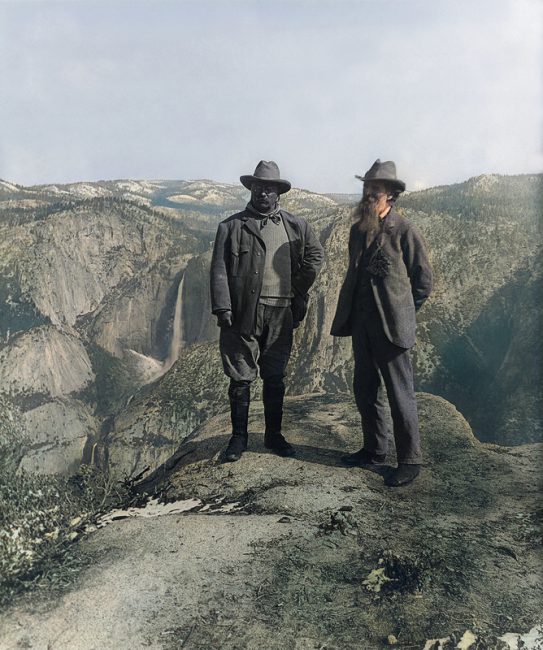 In 1903, John Muir showed Theodore Roosevelt the beauty of Yosemite. Muir told the president about the expoitation of the area’s resources and together the two men camped in the wild while Muir was able to convince Roosevelt about the expansion of the national park system and to combine both Yosemite Valley and Mariposa Grove, which had remained under California jurisdiction as authorized by Lincoln decades before. Unification of the park came in 1906. Unfortunately, in that year Muir also learned about the plans to build a dam in the Hatch Hetchy Valley. He was not able to stop the construction, but the American conservation movement then pushed for the creation of the National Park Service and a higher level of protection for all national parks, a development John Muir was not able to see. He passed away in 1914. [2]