You are here: Home › botany › Johann Gottlieb Kölreuter and the Study of Plant Fertilization 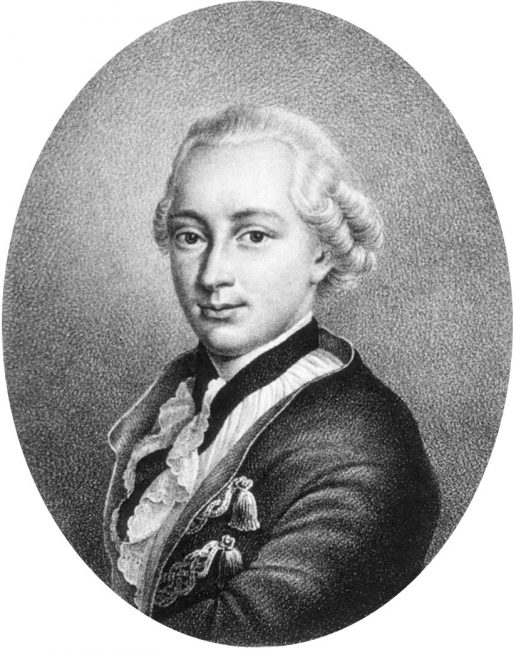 On April 27, 1733, German botanist Joseph Gottlieb Kölreuter was born. Kölreuter was a German botanist who pioneered the study of plant fertilization, hybridization and was the first to detect self-incompatibility. He was an observer as well as a rigorous experimenter who used careful crossing experiments although he did not inquire into the nature of heritability.

Joseph Gottlieb Kölreuter was the son of an apothecary in Karlsruhe, Germany. From early age, Kölreuter collected local insects and began to study medicine at the University of Tübingen. There, Kölreuter studied under the physician and botanist Johann Georg Gmelin , who had made a special name for himself as an explorer of Siberia and worked as professor of medicine and botany in Tübingen, where he reprinted a work by Rudolf Jakob Camerarius. The latter is best known for first demonstrating sexual reproduction in plants. In 1753 Kölreuter transferred to the University of Strasbourg and returned to Tübingen one year later, where he received his doctorate in 1755 with a thesis “On beetles and rare plants“.

From 1756 to 1761 he was an adjunct to the Russian Imperial Academy of Sciences in St Petersburg. He owed his appointment to a recommendation of his teacher and friend Johann Georg Gmelin. As his numerous writings written during this time show, Kölreuter was initially mainly concerned with zoology in Petersburg, especially with the order and determination of the fish collection of the Academy, where he also described several fish species anew, including Mola aculeata (Koelreuter, 1766), Eleginus navaga (Koelreuter, 1770) and Gadus callarias nawaga (Koelreuter, 1770). He also published works on birds, insects, corals and copepods. After the Petersburg Academy had set a prize assignment on the sexuality of plants in 1759, Kölreuter began botanical experiments on the fertilization of plants, being the first to investigate crosses between different plant species.

In 1761 he returned to Germany. He visited Johann Gottlieb Gleditsch in Berlin and Christian Gottlieb Ludwig in Leipzig, both famous botanists at the time, who were engaged in the crossing of plants. He first settled in his home town Sulz and continued his experiments there. In 1762 he moved to Calw, where his friend and fellow student Joseph Gärtner pursued his carpological studies, i.e. research into the development of fruits. In 1763, Margrave Karl Friedrich von Baden-Durlach appointed him to Karlsruhe as overseer and director of the princely gardens, with the title and rank of professor of natural history. Since his garden staff in Karlsruhe had no understanding for his research, he gave up his positions as director of the Botanical Garden and as professor and continued his work in his small private garden until 1776. In 1805 he became Electoral Chief Court Councillor.

In his research, Joseph Gottlieb Kölreuter followed the idea of the period of plants and nature personified by a Creator. Probbaly influenced by C. F. Wolff the works of Kölreuter believed in epigenetic influences. According to Kölreuter there had to be two uniform fluids, male and female semen which combined in the process of fertilization. He further believed that equal quantities of the male and female fluid were needed and he therefore examined how much pollen was needed in fertilization of a given number of seeds. Kölreuter examined the action of stigma fluid on pollen. described many plant species, and studied pollen and its transfer. 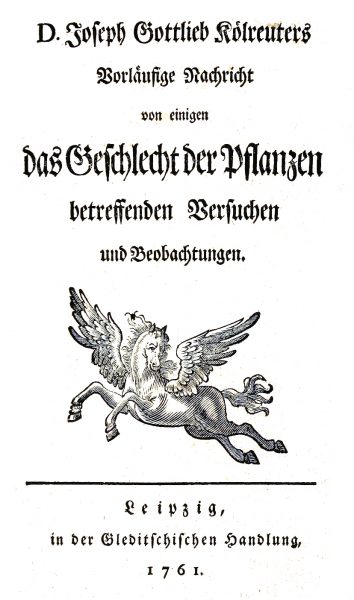 It is believed that Kölreuter conducted around 500 different hybridization experiments across 138 species and examined the pollen characteristics of over a 1000 plant species. In 1763, Kölreuter first documented male sterility, and he was the first to report self-incompatibility in Verbascum phoeniceum plants. Further, the botanist observed heterosis, that hybrids surpassed their parents. While Joseph Gottlieb Kölreuter’s experiments included repetition and control to test if hybrids across species could be fertile, Buffon used the idea of sterility of crosses as a method of testing species from In one experiment he sat beside a flower from dawn to dusk and shooed away all insects to find that the flower remained unfertilized.[3] In order to test the hypothesis by Jan Swammerdam that honey was nectar that underwent fermentation in the crop of a bee, Kölreuter collected nectar from many hundreds of orange trees and kept them in vials to evaporate and he reported that it thickened and tasted like honey with time.[4] Then, Linnaeus through his student J. J. Hartmann reported the possibility of new “species” arising from hybridization but Kölreuter was skeptical of the results.[5] Kölreuter then produced interspecific hybrids, hybrids showed male sterility. However, even though Kölreuter conducted a variety of repeated crossing experiments much in the manner of Gregor Mendel, he had no interest in examining the nature of heritability or the particulateness of heritable traits.

Almost completely forgotten is Kölreuter’s ichthyological work. After he had already worked for three years in Karlsruhe, his three-part treatment of rare fish from the holdings of the St. Petersburg museum was published in Russia. However, they were not published under his baptismal names, but with the initials of the latinized Russian spelling of his first names: I(osepho) T(eophilio) Koelreuter. Since a work from 1776 on plant crossbreeding was also signed with these initials, any confusion is impossible. In 1764 Koelreuter almost became the first scientific descriptor of the spotted gourami Trichogaster trichopterus. However, he did not adhere to the binary system of Linné, which had been valid since 1758, and only gave a generic name: Sparus. But the great lizard salmon from the north draining river systems of South America, Piabucus dentatus (Kölreuther 1763), was first described scientifically as Trutta dentata.