You are here: Home › literature › Hermann Hesse and his Quest for Self-Knowledge 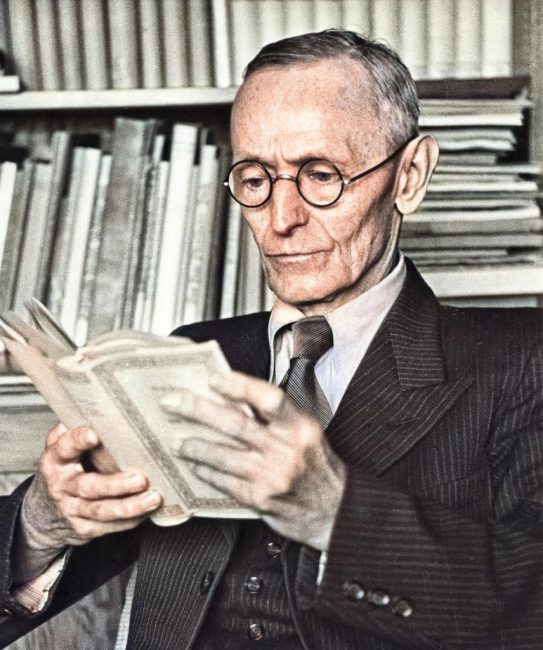 On July 2, 1877, German poet, novelist, painter, and Nobel Laureate Hermann Hesse was born. He is best known for his novels ‘Steppenwolf‘, ‘Siddhartha‘, or ‘The Glass Bead Game‘, in which he explores the individual’s search for authenticity, self-knowledge and spirituality.

“In the beginning was the myth. God, in his search for self-expression, invested the souls of Hindus, Greeks, and Germans with poetic shapes and continues to invest each child’s soul with poetry every day.”
– Hermann Hesse, Peter Camenzind (1904)

I’ve read the works of Hermann Hesse – as many other of my generation, too – when I was just about 18 years of age. Interestingly, my most favorite novel of Hesse by then was his ‘Steppenwolf‘, a story about the midlife crisis of a lonely 50something. So, you might ask, what makes it so attractive for an adolescent, who has no idea about the worries of a man aged fifty? It’s simply the concept of finding out who you really are or who you want to be. In times of crisis and self doubt – and for sure this also holds for an 18 years old adolescent – Hesse might really be the right choice of literature for you. I think I will read Hesse again now that I have already passed my 50th birthday…

Born in the Black Forest

Hermann Hesse was born in the Black Forest town of Calw in Württemberg, Germany. Both of Hesse’s parents served in India at a mission under the auspices of the Basel Mission, a Protestant Christian missionary society. His father was employed by the Calwer Verlagsverein, a publishing house managed by Hermann Hesse’s grandfather, publishing textbooks and theological books. Herman Hesse’s parents expected him to follow the family tradition in theology. Thus, he entered the Protestant seminary at Maulbronn in 1891, but he was expelled from the school. Hesse began a journey through various institutions and schools and experienced intense conflicts with his parents. After some fruitless experiences as a bookshop apprentice and a mechanic apprentice in a clock tower factory, he started to work in a distinguished antique book shop in Basel. Through family contacts, he stayed with the intellectual families of Basel, which provided him with rich stimuli for his pursuits and he further developed spiritually and artistically. At the same time, Basel offered the solitary Hesse many opportunities for withdrawal into a private life of artistic self-exploration, journeys and wanderings.

In 1899 Hesse published his first works, Romantische Lieder and Eine Stunde Hinter Mitternacht, which both failed for any business success. In 1900 Hesse was released from military service because of his poor eyesight. His eye problems persisted throughout his life, as did nerve and headaches. In 1904 came the breakthrough for Hesse with his first major novel Peter Camenzind that gained literary success throughout Germany. The book very much reflected Hesse’s disgust with the contemporary educational system. Even Sigmund Freud praised Peter Camenzind as one of his favorite readings.[4] Now, Hesse was able to make a living as a writer. In the same year he married the photographer Maria Bernoulli, with whom he should have three children. In 1906 Hesse published his second novel Unterm Rad (Beneath the Wheel), which he had written in Calw. Hesse used his experiences from school and education in this novel. His next novel Gertrud from 1910 showed Hesse, however, in a creative crisis – he had to struggle hard with this work, in later years he regarded it as unsuccessful.

A Visit to India

A visit to India in 1911 interested Hesse in studies of Eastern religions and finally culminated in the famous novel Siddhartha published in 1922. The book tells the story of the spiritual journey of self-discovery of a man named Siddhartha during the time of the Gautama Buddha. However,  he did not find the spiritual-religious inspiration he had hoped for there, but the journey had a strong influence on his other literary works and was initially reflected in the publication Aus Indien (From India) in 1913.

“I wanted only to live in accord with the promptings which came from my true self. Why was that so very difficult?”
– Hermann Hesse, Demian: The Story of Emil Sinclair’s Youth (1919)

In 1912 Hesse and his family took a permanent residence in Switzerland. In his novel Rosshalde, published in 1914, Hesse explored the question of whether the artist should marry. During these years Hesse’s wife suffered from growing mental instability and his son was seriously ill. Unfortunately, the change of environment could not solve Hesse’s marriage problems, as he himself confessed in Rosshalde. Hesse spent the years of World War I in Switzerland, attacking the prevailing moods of militarism and nationalism. In 1914, he volunteered with the Imperial army and was assigned to care for the causalities of World War I. Despite his desire to serve his country, Hesse inadvertently found himself surrounded by controversy. In his essay O Friends, Not These Tones, he argued that intellectuals should not fall victim to the extremities of nationalism. Instead everyone should embrace Europe’s common culture. The public turned against Hesse. 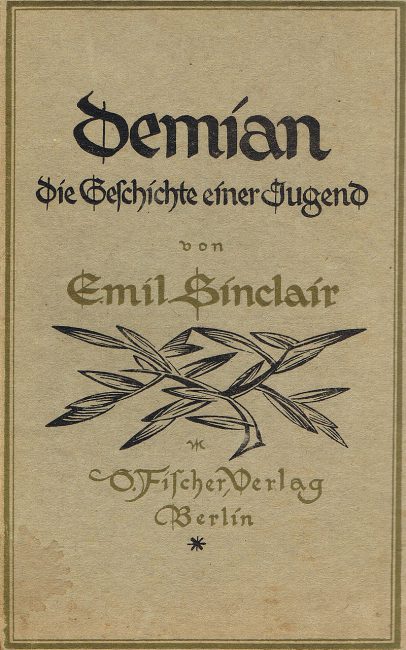 “How foolish to wear oneself out in vain longing for warmth! Solitude is independence. It had been my wish and with the years I had attained it. It was cold. Oh, cold enough! But it was also still, wonderfully still and vast like the cold stillness of space in which the stars revolve.”
– Hermann Hesse, Steppenwolf (1927)

By 1919, Hesse’s marriage was irreconcilably damaged. The same year his successful novel Demian was published under the pseudonym Emil Sinclair, a Faustian tale of a man torn between his orderly bourgeois existence and a chaotic world of sensuality. The commercial success as a writer enabled Hesse to move to Montagnola and in 1923, he became a citizen of Switzerland. The new situation in life and the location inspired Hesse not only to write, but also to draw sketches and watercolours, which was clearly reflected in Kliongsors letzter Sommer (Klingsor’s last summer) of 1920. His next major works, Kurgast from 1925 and Die Nürnberger Reise from 1927, are autobiographical narratives with an ironic undertone. They already herald Hesse’s most successful novel, The Steppenwolf of 1927, which he described as “a warning cry full of fear” before the coming world war and which was accordingly trained or ridiculed by the German public at the time. The Steppenwolf combined autobiographical and psychoanalytic elements, reflecting a profound crisis in Hesse’s spiritual world and portraying the protagonist’s split between his humanity and his wolf-like aggression and homelessness.

In 1931, Hesse began planning what would become his opus magnum, The Glass Bead Game. It was begun in 1931 and published in Switzerland in 1943 after being rejected for publication in Germany due to Hesse’s anti-Fascist views. Only three years after this work, Hermann Hesse was awarded the Nobel Prize in Literature. For the rest of his life, Hesse would continue to paint and write. In December 1961, Hermann Hesse fell ill with a flu from which he had difficulty recovering. He had been suffering from leukaemia for some time without knowing it; at the Bellinzona hospital he was treated with blood transfusions. Hesse died of a stroke in his sleep on the night of August 9, 1962, at age 85.

At yovisto academic video search we realized that we don’t have a video lecture about Hermann Hesse in our database. Nevertheless, we have decided to include a public domain audiobox from librivox.org with one of Hermann Hesse’s most famous novels: Siddharta.