You are here: Home › physics › Heinrich Barkhausen and the Barkhausen Effect 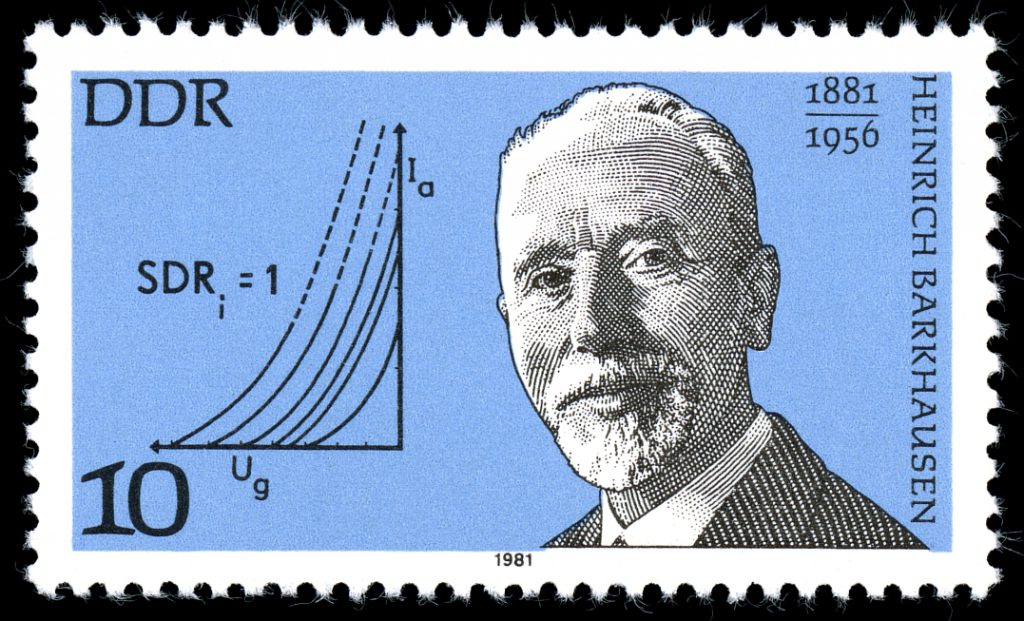 On December 2, 1881, German physicist Heinrich Barkhausen was born. Barkhausen discovered the Barkhausen effect (1919), a principle concerning changes in the magnetic properties of metal. With K. Kurz, he invented the Barkhausen-Kurz oscillator, the first vacuum tube electronic oscillator to use electron transit-time effects.

Heinrich Barkhausen came from a respected Bremen middle-class family. He showed interest in technology and natural sciences in his early youth, whereupon his high school diploma was followed in the spring of 1901 by a six-month internship in the Bremen railroad repair workshop, which was followed by a study of physics. Barkhausen began at the Technical University of Munich, followed by the universities of Berlin (1902), Munich (1903) and Göttingen (1903), where he finally accepted an assistant position at the Institute for Applied Electricity under Hermann Theodor Simon (1870-1918) in 1906, who awarded him his doctorate in the same year. At Dresden, Barkhausen became Professor for Electrical Engineering at the age of 29, thus obtaining the world’s first chair in this discipline.

In 1919, Heinrich Barkhausen discovered his eponymous effect, which provided evidence for the magnetic domain theory of ferromagnetism. When an external magnetizing field through a piece of ferromagnetic material is changed, for example by moving a magnet toward or away from an iron bar, the magnetization of the material changes in a series of discontinuous changes, causing “jumps” in the magnetic flux through the iron. These can be detected by winding a coil of wire around the bar, attached to an amplifier and loudspeaker. The sudden transitions in the magnetization of the material produce current pulses in the coil, which when amplified produce a sound in the loudspeaker. This makes a crackling sound, which has been compared to candy being unwrapped, Rice Krispies, or the sound of a log fire. This specific sound became well known as the Barkhausen noise.

These so called magnetization jumps are interpreted as discrete changes in the size or rotation of ferromagnetic domains. This means that some microscopic clusters of atomic spins aligned with the external magnetizing field increase in size by a sudden reversal of neighbouring spins, and especially as the magnetizing field becomes relatively strong, other whole domains suddenly turn into the direction of the external field. The spins tend to align themselves with their neighbours. The tension between the various pulls creates avalanching, where a group of neighbouring domains will flip in quick succession to align with the external field. So the material magnetizes neither gradually nor all at once, but in fits and starts.

It has been found that the amount of Barkhausen noise for a given material is linked with the amount of impurities, crystal dislocations, etc. and can be a good indication of mechanical properties of such a material. This means that the Barkhausen noise can be used as a method of non-destructive evaluation of the degradation of mechanical properties in magnetic materials subjected to cyclic mechanical stresses, high-energy particles or materials such as high-strength steels which may be subjected to damage from grinding. Barkhausen noise can also indicate physical damage in a thin film structure due to various nanofabrication processes such as reactive ion etching or using an ion milling machine.

The Institute for Low Current Technology

In 1907, Barkhausen’s dissertation “The Problem of Vibration Generation with Special Consideration of Fast Electrical Oscillations” was published as a book and met with great response. Barkhausen received a job offer from Siemens in Berlin immediately after the publication of his work – such an offer was still unusual at the time. There he worked as an engineer and, on the side, on a habilitation thesis, which he completed in 1910. Thereupon he was admitted by the TH Berlin as a private lecturer in electrical engineering. In 1911, Barkhausen was offered a position at the TH Dresden as an associate professor and director of the newly founded Institute for Low Current Technology. This was the first independent institute for weak-current technology in Germany.

At the beginning of the First World War, Barkhausen was “on leave” and from 1915 on he was engaged as a scientific assistant in the inspection of the torpedo system of the Imperial Navy in Kiel. There he was commissioned to create a counterpart to the Morse telegraphy relay for telephony: In message transmission, the signal power decreases with increasing distance due to losses in the cable, so that the message is no longer perceptible from a certain distance. Larger telegraphy distances can be bridged by relay stations. A relay, a remote-controlled Morse key, is connected instead of the receiver, so that the same distance can be bridged from this point on. Such a relay only knows the states on and off, but for telephony a stepless (analog) component would be necessary.

After the war, Heinrich Barkhausen taught at the university again, where interest in his subject area grew enormously with the advent of radio in Germany. The radio industry and radio stations also showed great interest in the graduates. Since 1919 there had been plans for a new building for the institute, but during the whole time it was impossible to think about it. Barkhausen also began to work on electroacoustics in 1920 and was faced with the problem that there was no volume measurement, whereupon he introduced the unit of measurement phon in 1925. The Bark scale is also named after him. Barkhausen traveled to the USA in 1929 and to the Soviet Union in 1930, received an honorary doctorate from the TH Darmstadt in 1932 and published an introduction to the theory of vibrations.

In the 1930s, Barkhausen continued to work with only a few assistants. On February 13, 1945, the institute finally fell victim to the bombing of Dresden, whereupon he was “suspended” in March 1945. After a seven-day trip full of privation, Heinrich Barkhausen was able to return to Dresden in June 1946. Together with his assistant Heinz Schönfeld, he rebuilt the Institute for Low Current Technology from small beginnings at the age of 65. In 1949, Barkhausen was awarded the GDR National Prize II Class for Science and Technology, and on September 1, 1953, he retired as professor and director of the Institute for Low Current Technology. In the last years of his life, Barkhausen also took part in transistor development. For the Technical University of Dresden he was the namesake of the main building of the Faculty of Electrical Engineering and Information Technology.

Heinrich Barkhausen died in Dresden in 1956.