You are here: Home › chemistry › Hazel Bishop and the Long Lasting Lipstick 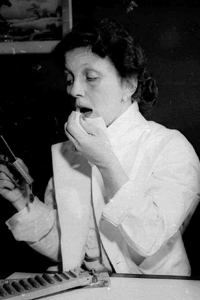 On August 17, 1906, US-American chemist Hazel Gladys Bishop was born. She is best known as the inventor of the first long lasting lipstick in 1949, an invention on which she founded a successful cosmetic company.

Hazel Gladys Bishop graduated in 1929, earning a degree in chemistry. It is assumed that originally, Bishop intended to become a doctor, but instead left medical school and started her career in bio-chemistry. One year after earning her degree, the scientist began working at the New York State Psychiatric Hospital and Institute next to taking night school classes in biochemistry at the College of Physicians and Surgeons at Columbia University. It is known that Bishop has always been encouraged by her mother to open her own business one day, “even if it’s only a peanut stand“. After she had gained some working experience as a research assistant to dermatologist A. Benson Cannon, her goal was to create a new cosmetic formulation and during the 1930s she developed two products, a pimple concealer and mentholated tissues. Unfortunately, none of these products were successful on the market [1].

A Brief History of Lipstick

Apparently, lipstick has already been used in the Ancient Mesopotamia. It is assumed that Ancient Sumerian men and women invented the lipstick about 5000 years ago and decorated their faces, especially their lips and their eyes. Also, it is known that the women of the Indus Valley Civilization applied red tinted lipstick to their lips for decoration purposes. In the 16th century, it is assumed that lip coloring became popular in England and back then, it was made from beeswax and red stains from various plants. Even though lipstick became widely known in the western world as well during the 19th century, it was not really considered acceptable for respectable women, especially in Britain. It is assumed that the first commercial lipstick had been invented in 1884 in Paris [4].

After her first failures, Hazel Bishop intended to create a product for a broader target group and a study revealed that about 98% of women wore lipstick every day. The chemist began experimenting in order to create a nondrying, nonirritating, long-wearing lipstick, using her home kitchen as a laboratory. Her goal was to develop a smudge-proof and long lasting lipstick that would not smear on clothing. Her first experiments included staining dyes, oils, and molten wax and eventually, the “No-Smear Lipstick” was born. Bishop found financial support and the Hazel Bishop, Inc. was formed. The very first commercial run of the lipstick was produced, and it debuted at a fashion show given by the Barnard College Club of New York on November 4, 1949. The product appeared in regular stores shortly after and was an instant financial success [1]. The early advertisement said “Never again need you be embarrassed by smearing friends, children, relatives, husband, sweetheart” and after the first day, about 600 lipsticks were already sold [2]. 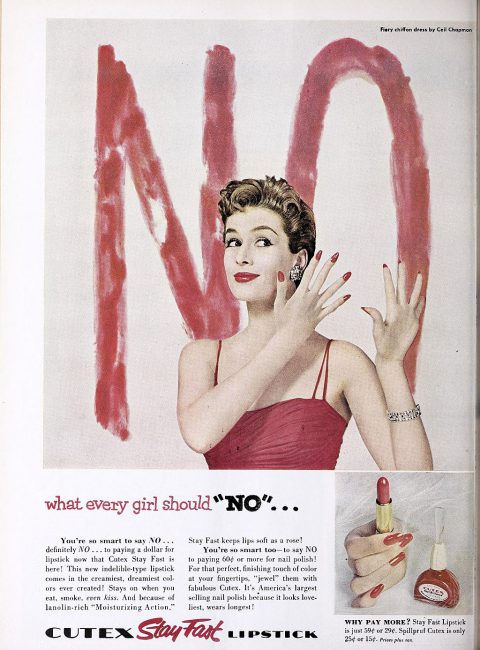 The quite aggressive marketing campaign was led by Raymond Spector and by 1953, the company had captured about 25% of the lipstick market. Sadly, Bishop’s success did not last long. Her partner Spector bought out the stockholders and recapitalized the company. This way, her shares reduced to only 8%. She was fired from the company in 1954 and lost all of her incomes instantly. The former business owner had to agree to stay out of the cosmetics industry in the future. However, Bishop founded further companies, dealing with perfume and health cosmetics. During an interview, she said in 1963, that “I’m still essentially a chemist and I expect I shall always be one“. Hazel Bishop was elected fellow of the American Institute of Chemists in the 1950s, giving numerous lectures about the chemistry and cosmetics industry [3]. In 1978, Bishop became a professor at the Fashion Institute of Technology in New York City. She was appointed to the Revlon Chair in Cosmetics Marketing in 1980. Bishop helped develop a curriculum whose focus included marketing and merchandising principles, advertising, promotion, and publicity campaign concepts, and product knowledge. She stopped teaching in 1986, though she remained involved with the Fashion Institute as a consultant.

Hazel Bishop died on December 5, 1998. During an interview, she commented:

“If you are willing to strive and have no fear of failure, you can never fail as long as you are on to the next step“.