You are here: Home › psychology › Hans Berger and the Electroencephalogram 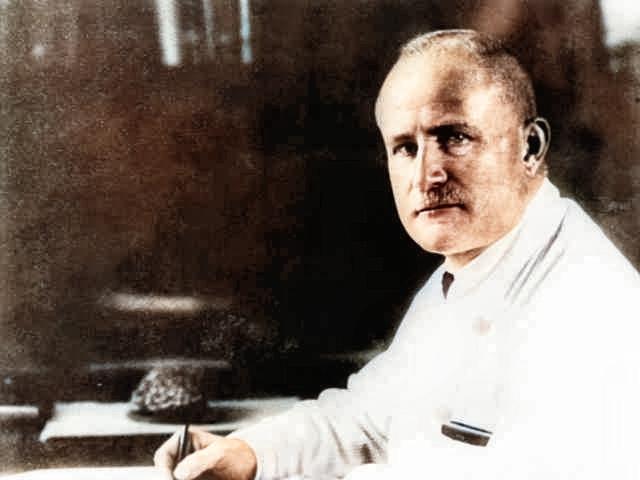 On May 21, 1873, German psychiatrist Hans Berger was born. Berger is best known as the inventor of electroencephalography (EEG), coining the name, and the discoverer of the alpha wave rhythm known as “Berger’s wave”.

Hans Berger was born in Neuses (today Coburg), Saxe-Coburg and Gotha, Germany, the son of Paul Friedrich Berger,  chief physician of the regional asylum in Coburg [3], and his wife Anna Rückert. His maternal grandfather was the famous German poet Friedrich Rückert. After attending Casimirianum, the Gymnasium at Coburg where he gained his abitur in 1892, Berger enrolled as a mathematics student at the Friedrich Schiller University of Jena with a view to becoming an astronomer. After one semester, he abandoned his studies and enlisted for a year of service in the cavalry. During a training exercise, his horse suddenly reared and he landed in the path of a horse-drawn cannon. His sister, at home many kilometres away, had a feeling he was in danger and insisted their father telegram him. However, Berger was luckily not further harmed, but the incident made a huge impression on him. On completion of his military service, and obsessed by the idea of how his mind could have carried a signal to his sister, Berger returned to Jena to study medicine with the goal of discovering the physiological basis of a form of “psychic energy”.

After obtaining his medical degree from Jena in 1897, Berger joined the staff of Otto Ludwig Binswanger (1852–1929) who held the Chair in psychiatry and neurology at the Jena clinic. Habilitated in 1901, he qualified as a senior university lecturer in 1906 and physician-in-chief in 1912, eventually succeeding Binswanger in 1919. The central theme in Berger’s work was the search for the correlation between objective activity of the brain and subjective psychic phenomena. Berger also studied the effects of a number of medications—such as camphor, digitoxin, caffeine, cocaine, and morphine—on brain pulsations. The results of these investigations were disappointing, yet Berger continued his search for measurable expressions of psychic conditions through experiments on blood circulation (1904, 1907). After 1907 Berger tried to discover a correlation between the temperature of the brain and psychic processes. He postulated that through dissimilation in the cortex, psychic energy (P-Energie) develops, along with heat, electrical energy, and neural energy. After his disappointing experiments measuring the blood circulation and temperature of the brain, Berger devoted himself mainly to the measurement of the brain’s electrical activity.[2]

An early EEG recording by Hans Berger, the upper tracing is EEG, and the lower is a 10 Hz timing signal.

In 1924, Berger succeeded in recording the first human electroencephalogram (EEG). Filled with doubt, it took him five years to publish his first paper in 1929 which demonstrated the technique for “recording the electrical activity of the human brain from the surface of the head“. His findings were met with incredulity and derision by the German medical and scientific establishments.

Already in 1875, Richard Caton (1842–1926), a physician practicing in Liverpool, presented his findings about electrical phenomena of the exposed cerebral hemispheres of rabbits and monkeys in the British Medical Journal. In 1890, Polish physiologist Adolf Beck published an investigation of spontaneous electrical activity of the brain of rabbits and dogs that included rhythmic oscillations altered by light. His observation of fluctuating brain activity led to the conclusion of brain waves. In 1912, Russian physiologist Vladimir Vladimirovich Pravdich-Neminsky published the first animal EEG and the evoked potential of the mammalian (dog). In 1914, Napoleon Cybulski and Jelenska-Macieszyna photographed EEG recordings of experimentally induced seizures.

The EEG, the curves of the electrical potentials measured again and again between two points of the skull, did not give Berger a closer insight into the correlation between the electrical activity of the brain and psychic energy.[2] After British electrophysiologists Edgar Douglas Adrian and B. H. C. Matthews confirmed Berger’s basic observations in 1934, the importance of his discoveries in electroencephalography (EEG) were finally recognized at an international forum in 1937. By 1938, electroencephalography had gained widespread recognition by eminent researchers in the field, leading to its practical use in diagnosis in the United States, England, and France. In clinical contexts, EEG refers to the recording of the brain’s spontaneous electrical activity over a period of time, as recorded from multiple electrodes placed on the scalp. is most often used to diagnose epilepsy, which causes abnormalities in EEG readings. It is also used to diagnose sleep disorders, coma, encephalopathies, and brain death. EEG used to be a first-line method of diagnosis for tumors, stroke and other focal brain disorders, but this use has decreased with the advent of high-resolution anatomical imaging techniques such as magnetic resonance imaging (MRI) and computed tomography (CT).

Berger suggested that the complex EEG was composed of two fundamental waveforms: the larger 100 µsec alpha waves that were correlated with mental activity—the “physical concomitants of conscious phenomena”— and the smaller 35 µsec beta waves which were associated with the metabolic activities of cortical tissue.[3] The different waves or rhythms are present as well in the normal as in the abnormal brain. The alpha wave rhythm (7.812–13.28 Hz), also known as “Berger’s wave” and its suppression (substitution by the faster beta waves) when the subject opens the eyes (the so-called alpha blockade). Berger also studied and described for the first time the nature of EEG alterations in brain diseases such as epilepsy.

In 1938, Berger retired and was made Professor Emeritus in Psychology. Numerous sources report that, given their hostile relationship, the Nazis forced Berger into retirement that same year with a complete ban of any further work on EEG. Berger did not join one of the Nazi organisations despite significant pressure by his University peers, but was a supporting SS member, possibly for self-protection. After a long period of clinical depression, and suffering from a severe skin infection, Berger committed suicide on June 1, 1941.

Intro to EEG, Centre for Neuroscience in Education at the University of Cambridge, [6]