You are here: Home › art › Gustav Klimt and the Vienna Secession

On July 14, 1862, Austrian painter Gustav Klimt was born. Klimt is considered the most famous representative of Viennese Art Nouveau and founding president of the Vienna Secession. He noted for his paintings, murals, sketches, and other objects d’art. Klimt’s primary subject was the female body, and his works are marked by a frank eroticism. Klimt was the most influenced by Japanese art and its methods.

Gustav Klimt was the son of Ernst Klimt the Elder (1834 – July 1892), a gold engraver from Bohemia, and Anna Rosalia Klimt née Finster (1836 – February 1915). He was born as the second of seven children in the Viennese suburb. At first Klimt was supposed to learn his father’s profession, but he received a scholarship, so that from 1876-1883 he attended the Vienna School of Applied Arts of the Austrian Museum of Art and Industry with Ferdinand Laufberger, Victor Berger, and Ludwig Minnigerode. During this time he still lived (with interruptions) with his parents. In the 1880s, together with his brother Ernst and Franz Matsch, he formed a studio partnership known as the Künstler-Compagnie. In 1888/1889 Klimt traveled to Krakow, Trieste, Venice and Munich. Among other things, the company created curtain and ceiling paintings for the theaters in Reichenberg, Karlsbad, and in 1885 in Fiume. In 1885, it created the ceiling paintings in the Hermes Villa in Vienna, in the period from 1886 to 1888 the ceiling frescoes in the two staircases of the new building of the Burgtheater, and in 1891/1892 the spandrel and intercolumniate paintings in the staircase of the Kunsthistorisches Museum in Vienna as well as the murals of the Peleș Castle in Romania. 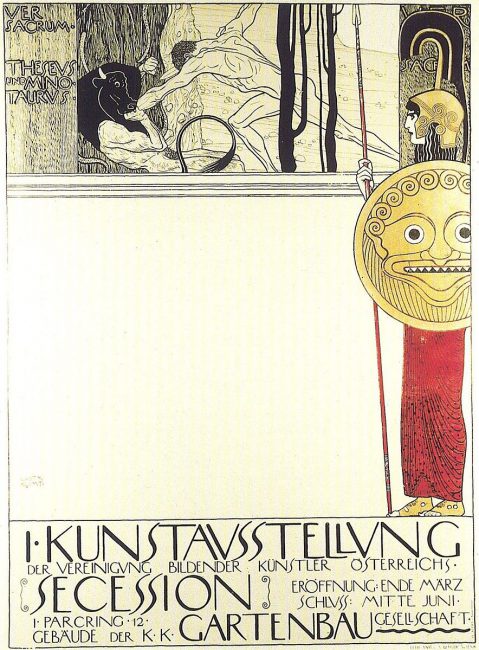 Gustave Klimt, I. Art Exhibition of the Association of Fine Artists of Austria.

In 1891 he became a member of the Cooperative of Fine Artists of Vienna (Künstlerhaus). In 1892 his father died in July, and in December his younger brother Ernst. On May 24, 1897, he resigned from the Künstlerhaus and was one of the founders of the Vienna Secession, of which he was the first president from 1897 to 1899. Their main motivation was that the artists rejected the conservatism and traditional concept of art – oriented towards historicism – that prevailed at the Künstlerhaus. Klimt also designed the metal doors for the Secession building erected by Josef Olbrich in 1897/1898. In 1898 the Secession held its first exhibition. For the Secession’s magazine Ver Sacrum (“The Holy Spring“, which is to express the hope of a new flowering of art) Klimt provided numerous picture templates and illustrations during the years 1898 to 1903.

The Faculties at Vienna University

In 1894 Gustav Klimt was commissioned by the Ministry of Education to paint the ceiling of the newly constructed university building. The intended theme was The Victory of Light over Darkness. The individual faculties were to be presented in the paintings commissioned to them. However, since Klimt’s designs did not depict the rational sciences and their useful work in a way that met conservative expectations, 87 faculty members rejected his proposals. The press, which was loyal to the state, also strongly criticized him. After the Vienna scandal over the first painting, Philosophy, which won a gold medal at the Paris World’s Fair, Klimt was even less willing to compromise in painting Medicine (1901) and Jurisprudence than before. 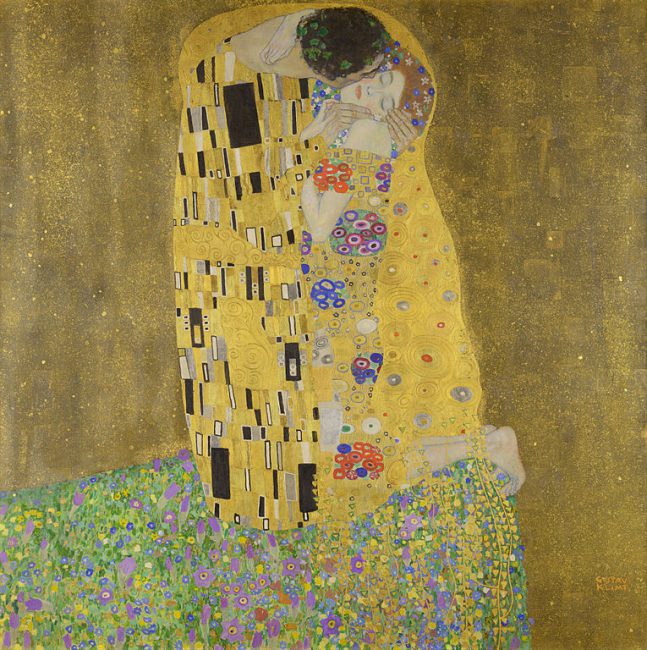 In 1905 Klimt exhibited fifteen works at the 2nd annual exhibition of the Deutscher Künstlerbund in the newly opened exhibition house of the Berlin Secession on Kurfürstendamm and was awarded the Villa Romana Prize. In 1906 Klimt traveled to Belgium and England and was made an honorary member of the Royal Bavarian Academy of Fine Arts in Munich. In 1908 he traveled to Florence. In 1907-1908 Klimt produced his most famous painting, The Kiss. The painting was shown at the 1908 Vienna Art Show and was immediately accepted by the Ministry for Culture and Education immediately purchased. Exhibitions abroad testify to Klimt’s importance in the art world of the time. He exhibited in Prague and Dresden in 1908, in Munich in 1909, and at the IX Venice Biennale in 1910, where his works were enthusiastically received. 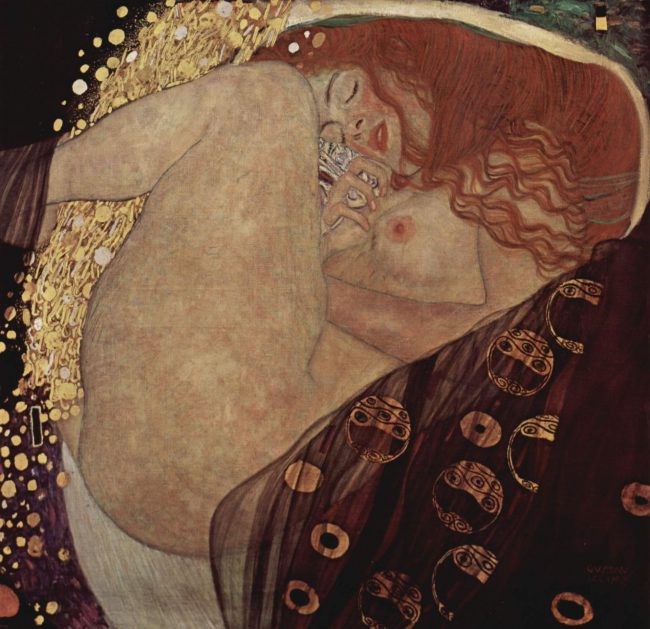 From 1900 to 1916 Gustav Klimt spent most of his summers at Attersee in Upper Austria, mainly visiting the villa of the court master carpenter Friedrich Paulick. This is where most of his landscape paintings were created. The artist maintained close relationships with some of his patrons, who were primarily from the assimilated Jewish Viennese upper middle class. He cultivated intimate relationships especially with his models from upper middle-class circles. He was considered progressive for his time because he allowed women an active role in sexuality. Klimt was never married, but had intimate relationships with several women and fathered seven children . The extent of his relationships with the women he portrayed for his clients, such as with Serena Lederer, the wife of August Lederer, or with Adele Bloch-Bauer, the wife of sugar industrialist Ferdinand Bloch-Bauer, is obscure. Close, but not necessarily sexual relations also existed with Alma Mahler-Werfel. Emilie Flöge, for whose fashion salon Klimt made designs for reform dresses, is described as his partner.

Gustav Klimt, Judith and the Head of Holofernes 1901, Belvedere

In 1917 the Ministry of Education refused for the fourth time to appoint Klimt professor at the Academy of Fine Arts in Vienna (the first proposal was made in 1891), whereupon the Academy appointed him its honorary member on October 26, 1917. Gustav Klimt suffered a stroke in his apartment on January 11, 1918. He died on February 6, 1918, after contracting influenza pneumonia there.