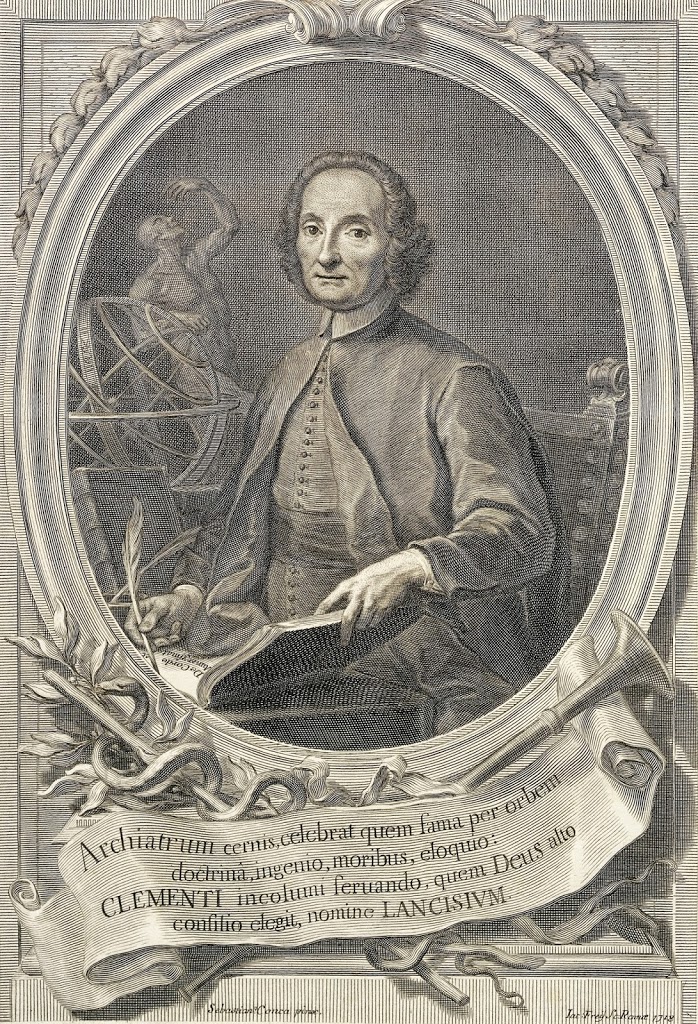 On October 26, 1654, Italian physician, epidemiologist and anatomist Giovanni Maria Lancisi was born. A personal physician to three popes, he is considered the first modern hygienist. He made a correlation between the presence of mosquitoes and the prevalence of malaria. He was also known for his studies about cardiovascular diseases, and is remembered in the eponymous Lancisi’s sign.

Giovanni Maria Lancisi, also often referred to under his Latinized name Johannes Maria Lancisius, was born in Rome into a rich family of the Roman bourgeoisie. His father, Bartolomeo Lancisi, was born in Borgo di San Sepolcro; his mother, Anna Maria Borgianni, Roman, died giving birth to him, so he was raised in Orvieto by an aunt, a nun. Lancisi was educated at the Collegio Romano and the University of Rome, where he studied philosophy and liberal arts. He also briefly studied theology, but became progressively interested in natural history. Finally, he turned his attention to medicine and enrolled in the senior college of the Sapienza at Rome from where he graduated as Doctor of Philosophy and Medicine in 1672 at the age of 18. [3]

In 1684, Lancisi was appointed Public Professor of Anatomy in the Senior College of the University of Sapienza in Rome. At age 34, Lancisi was appointed physician to Pope Innocent XI and in 1689 after the Pope’s death subsequently he was physician to Popes Innocent XII and Clement XI. Lancisi wrote the classic monograph De subitaneis mortibus (1707, “On Sudden Death”) at the request of Clement XI to explain an increase in the number of sudden deaths in Rome. Lancisi attributed sudden death to such causes as cerebral hemorrhage, cardiac hypertrophy and dilation, and vegetations on the heart valves. This treatise and De motu cordis et aneurysmatibus (1728, “On the Motion of the Heart and on Aneurysms”), in which he discussed the various causes of heart enlargement and was the first to describe aneurysms of syphilitic origin, markedly contributed to knowledge of cardiac pathology. In his writing “De recta medicorum studiorum ratione” (1715) Lancisi pleaded for a modern medical training model. He had in mind a curriculum based on the two pillars “learning in the hospital” and “learning in the library”. On the one hand, the student was to attend the visit of the protomedicus to the sick and on the other hand, he was to deal with the new philosophy of nature in the library. Lancisi hoped that this would bridge the gap between theory and practice.

Although a clear description of angina pectoris would not appear for more than half a century, Lancisi described complaints which surely represented this entity. He wrote, “internal pains of the chest, accompanied at one moment by difficulty of breathing, especially when ascending hills, and at another by a strangling sensation of the heart and frequently by an uneven pulse … are apt to kill out of time, particularly if the patients subject themselves to violent exertions and glut themselves with unwholesome food.” Moreover, his scientific achievements include findings on hygiene, which he gained in particular through the consistent documentation of epidemiological observations. He had noticed that feverish illnesses, which often led to death, were greatly reduced when the marshes around Rome were drained. This lead also to the publication of De Noxiis Paludum Effluviis (On the Noxious Effluvia of Marshes) in 1717, in which he recognized that mosquito-infested swamps are the breeding ground for malaria and recommended drainage of these areas to prevent it. He thus set himself in opposition to the idea at that time that these diseases were caused by the effect of mal aria, i.e. “bad air”. His further findings relate to diseases such as influenza, rinderpest and above all malaria.

He was given the lost anatomical plates of Bartolomeo Eustachius by Pope Clement XI. These plates were made in 1562 and had been forgotten in the Vatican Library. Lancisi edited and published them in 1714 as the Tabulae anatomicae. Early in the 18th century, Lancisi had protested the medieval approaches to containing rinderpest in cattle by famously stating that “it is better to kill all sick and suspect animals, instead of allowing the disease to spread in order to have enough time and the honour to discover a specific treatment that is often searched for without any success”. It was no wonder then, that it was the same Giovanni Maria Lancisi who made the first breakthrough in the control of rinderpest, a procedure that was later adopted by Thomas Bates.

Fungi and the Corpus Callosum

Together with Luigi Ferdinando Marsigli, he published a book in 1714 entitled Dissertatio de Generatione Fungorum, in which both contradict the view, widespread since antiquity, that mushrooms originate from rot, with mycelium being an intermediate stage between rotting plants and the fungi. In doing so, they resolutely oppose the idea of a primordial production that has existed since antiquity. Arguably, Lancisi’s most notable medical contribution was the anatomical description of the medial longitudinal striae of the corpus callosum, in addition to other documents he wrote in the field of neurology. Lancisi was a multifaceted man with vast interests outside of medicine including language and literature.[2] Lancisi died in 1720 after brief illness at age 75.