You are here: Home › history › Charles Martel and the Battle of Tours and Poitiers 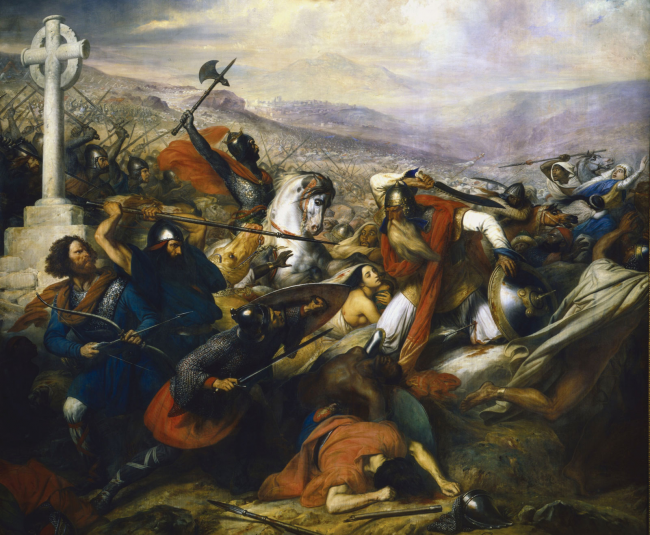 The battle of Tour and Poitiers, painting by Carl von Steuben, 1837.

On October 25, 732 AD, the Battle of Tours and Poitiers between the united Frankish and Burgundian forces under Austrasian Mayor of the Palace Charles Martel, against an army of the Umayyad Caliphate led by Abdul Rahman Al Ghafiqi, Governor-General of al-Andalus, ended the Islamic expansion era in Europe. It is argued among historians that Charles Martel’s victory was one of the most important events in European or even world history.

The Fate of Western Civilization at Stake

Again, probably the Fate of Western Civilization was at stake. You might remember our post about the legendary battle in the Catalaunian Plains, where Attila the Hun was defeated by a Western Roman army, preventing the Huns from conquering Europe and thus, changing our entire history. [6] Likewise, the rise of the Islam had become a threat when Islamic armies conquered Northern Africa spreading the new religion westward and finally traversed the Strait of Gibraltar led by Tariq ibn-Ziyad, entering European soil in southern Spain. The Umayyad Caliphate was the second of the four major Islamic caliphates established after the death of Muhammad and for 21 years they continued their conquest of the Visigothic Christian Kingdoms of the Iberian peninsula from 711 AD on until they reached the Frankish territories of Gaul, today’s southern France. According to one unidentified Arab chronicler, “That army went through all places like a desolating storm“sacking and capturing the city of Bordeaux, and then defeating the army of Duke Odo of Aquitaine at the Battle of the River Garonne — where the western chroniclers state, ‘God alone knows the number of the slain’— and Duke Odo fled to Charles Martel, seeking help.”

The Frankish Realm under Charles Martel

The Frankish realm under Charles Martel was the foremost military power of Western Europe. Charles was the illegitimate son of Pepin, the powerful mayor of the palace of Austrasia and effective ruler of the Frankish kingdom. During most of his tenure in office as commander-in-chief of the Franks, the kingdom consisted of what is the north and the east of France, most of Western Germany, and the Low Countries (Luxembourg, Belgium and the Netherlands). The Frankish realm had begun to progress towards becoming the first real imperial power in Western Europe since the fall of Rome.[8] Meanwhile the Umayyad army utterly devastated southern Gaul. Their own histories saying they “faithful pierced through the mountains, trampled over rough and level ground, plundered far into the country of the Franks, and smote all with the sword, insomuch that when Eudo (Duke Udo of Aquitaine) came to battle with them at the River Garonne, he fled.” 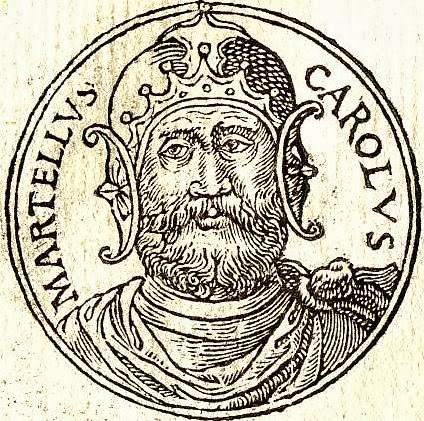 The Umayyad Advance in Europe

The Umayyad advance force was proceeding north towards the River Loire having outpaced their supply train and a large part of their army. Essentially, having easily destroyed all resistance in that part of Gaul, the invading army had split off into several raiding parties, while the main body advanced more slowly. The invading force went on to devastate southern Gaul with a possible motive to plunder the riches of the Abbey of Saint Martin of Tours, the most prestigious and holiest shrine in Western Europe at the time. Upon hearing this, Austrasia’s Mayor of the Palace, Charles Martel, collected his army and marched south, avoiding the old Roman roads and hoping to take the Umayyad forces by surprise. Because he intended to use a phalanx formation of heavy infantry, it was essential for him to choose the battlefield. His plan — to find a high wooded plain, form his men and force the Umayyad army to come to him — depended on the element of surprise.

The invading Muslims rushed forward, relying on the slashing tactics and overwhelming number of horsemen that had brought them victories in the past. However, the Frank army of foot soldiers armed only with swords, shields, axes, javelins, and daggers, was very well trained. Despite the effectiveness of the Umayyad army in previous battles, the terrain caused them a disadvantage. Their strength lay within their cavalry, armed with large swords and lances. But along with their baggage mules, they were limited in their mobility. The Frank army displayed great ardency and held its ground against a mounted attack. Actually, the length of the decisive battle near the city of Tours is undetermined. While Arab sources claim that it was two days, Christian sources hold that the fighting lasted for even seven days. In the end, the battle was decided when the Franks captured and killed the Umayyad leader Abd-er Rahman, which caused the muslim army to withdraw peacefully overnight, never to return again.

History is always written by the Winning Party

This event looms much larger in Western history than Muslim. Of course history is always written by the winning party – leading to a famous passage of prose by historian Edward Gibbon about minarets rather than spires in Oxford if the Muslims had won.[7] However, Charles’s victory is widely believed to have stopped the northward advance of Umayyad forces from the Iberian peninsula, and to have preserved Christianity in Europe during a period when Muslim rule was overrunning the remains of the old Roman and Persian Empires. Victory at Tours ensured the ruling dynasty of Charles Martel’s family, the Carolingians. His son Pepin became the first Carolingian king of the Franks, and his grandson Charlemagne carved out a vast empire that stretched across entire Europe.[9]