You are here: Home › chemistry › George Kistiakowsky – From the Manhattan Project to a Nuclear Weapons Ban 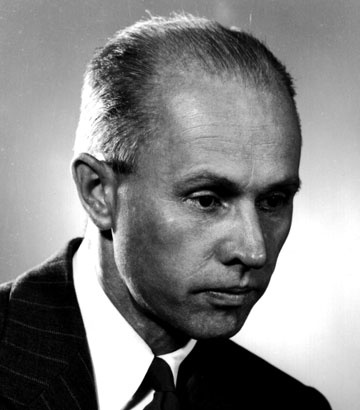 On November 18, 1900, Ukrainian-American physical chemist George Kistiakowsky was born. Kistiakowsky worked on developing the first atomic bomb but later advocated banning nuclear weapons. In the Manhattan project, he was in charge of X Division, which was responsible for the development of the explosive lenses necessary for an implosion-type nuclear weapon.

George Bogdanovich Kistiakowsky went to the Russian Revolution in 1917 in Kiev and Moscow in private schools. However, Kistiakowsky joined the anti-Communist White Army and escaped from Russia in a french ship. Eventually, he arrived in Germany and enrolled at the University of Berlin. Kistiakowsky earned his PhD in physical chemistry with Max Bodenstein and wrote his thesis on the photochemical decomposition of chlorine monoxide and ozone. In 1926 he traveled to the United States as an International Education Board fellow at Princeton University where he later became associate professor. In 1930, Kistiakowsky joined Harvard University where he researched thermodynamics, spectroscopy, and chemical kinetics. There he also became involved in consulting for the government and industry. 1932 wurde er Fellow der American Physical Society. In 1933, Kistiakowsky was appointed associate professor at Harvard and became American citizen. In 1938, he became the Abbott and James Lawrence Professor of Chemistry. He was elected to the American Academy of Arts and Sciences in 1933 and to the American Philosophical Society in 1940.

After the start of World War II, President Roosevelt created the National Defense Research Committee with the chairman Vannevar Bush.[5] The president of Harvard, James Conant was back then appointed head of Division B, which was responsible for bombs, fuels, gases and chemicals and Kistiakowsky became head of Section A-1, which was concerned with explosives. After the NDRC was absorbed into the Office of Scientific Research and Development and further re-organization, Kistiakowsky became responsible for explosives and propellants until 1944. One part of Kistiakowsky’s research concerned the powerful explosive RDX. After a special request for an explosive that could be smuggled through Japanese checkpoints by Chinese guerrillas, Kistakowsky mixed HMX. It was a non-toxic explosive produced as a by-product of the RDX process, with flour to create “Aunt Jemima“, after a brand of pancake flour. It was said to be an edible explosive, and could apparently even be used in cooking. A further field of research by Kistiakowsky dealt with the properties of detonations and shock waves.

Working for the Manhattan Project

At the Manhattan Project’s Los Alamos Laboratory, Robert Oppenheimer organized a meeting with John von Neumann to investigate their implosion research.[6,7] Von Neumann then suggested the use of high explosive in shaped charges to implode a sphere, which he showed could not only result in a faster assembly of fissile material than was possible with the gun method, but which could greatly reduce the amount of material required. They decided that an expert on explosives was required and Kistiakowsky was appointed consultant in October 1943. At Los Alamos, Kistakowsky reorganized the implosion efforts and introduced photography and X-Rays to study the behavior of shaped charges.  In 1944 he replaced Neddermeyer as head of the explosives Division. His devision designed the complex explosive lenses needed to compress the fissile plutonium pit. In 1945 Kistiakowsky watched as the first device was detonated in the Trinity test. A few weeks later a Fat Man implosion-type nuclear weapon was dropped on Nagasaki.

After World War II, Kistiakowsky was appointed to the President Eisenhower’s Advisory Committee and became its chairman in 1959 and he directed the Office of Science and Technology Policy from 1959 to 1961. In 1960 he proposed the “threshold concept”, meaning that all nuclear tests above the level of seismic detection technology would be forbidden. From 1962 to 1965, Kistiakowsky chaired the National Academy of Sciences’s Committee on Science, Engineering, and Public Policy. He became its vice president from 1965 to 1973. He severed his connections with the government in protest against the war in Vietnam, and became active in an antiwar organization, the Council for a Livable World, becoming its chairman in 1977.

Kistiakowsky retired from Harvard as professor emeritus in 1972. He died in December 7, 1982 in Cambridge, Massachusetts, at age 82.