You are here: Home › medical science › Fritz Kahn and the Mensch Maschine 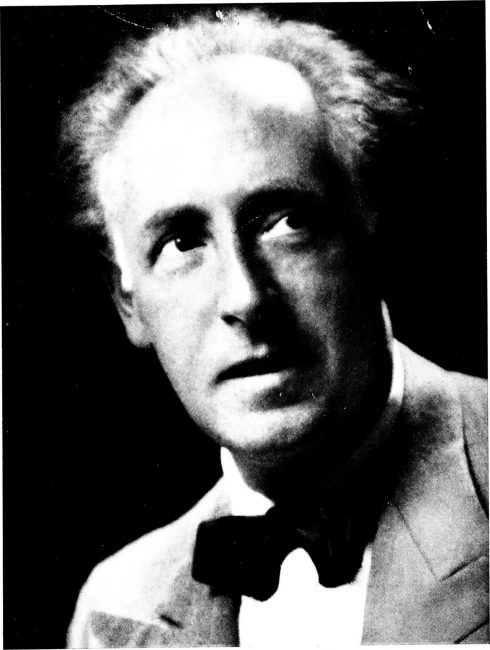 On September 29, 1888, German Jewish physician Fritz Kahn was born. He is best known for his publication of popular science books and especially for his illustrations, which pioneered infographics.

Fritz Kahn was born in Halle, Germany and grew up with Jewish orthodox traditions and a decent education. In his early years, the Kahn family relocated several times and even lived in the United States for quite a while before settling in Berlin. The young Fritz enrolled at the University of Berlin in order to study medicine and also heard numerous lectures in various sciences. He specialized in gynecology and began published several scientific works for national newspapers and magazines.

Combat Medic at World War I

However, World War I started and Fritz Kahn became a combat medic. During his free time, he also worked on his then very popular book ‘The Milky Way’. Back in Berlin, Kahn was appointed surgeon and obstretician in a private hospital and created his successful books ‘The Cell‘ as well as ‘The Jews as a Race and Cultural People‘. Also, Kahn released the highly illustrated five-volume series ‘The Life of Man‘. Quickly, Kahn became a very well known bestseller author. [1] 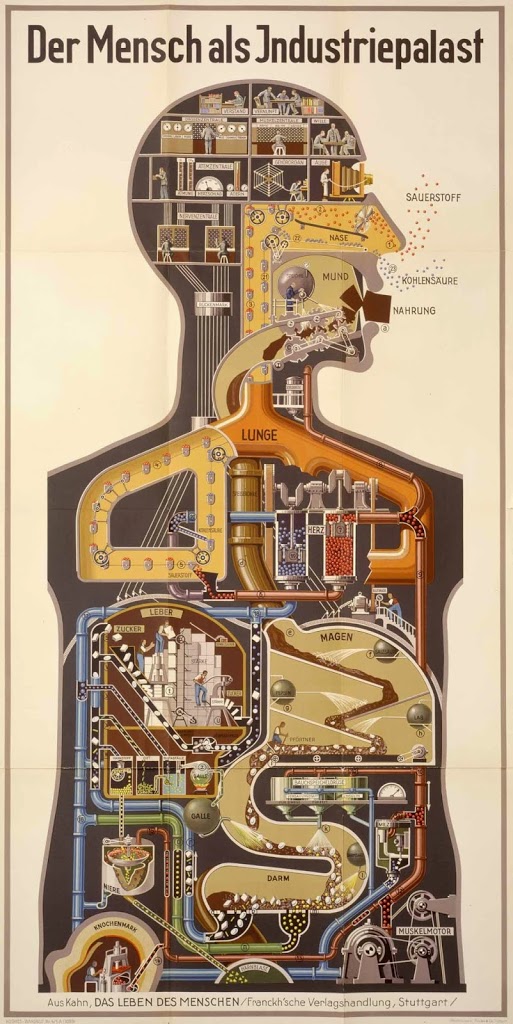 The Life of Man

In ‘The Life of Man‘, an oversize poster version of one of his suggestive illustrations as an aside was published. It showed the interior workings of the upper part of a human body with the help of machine parts. While the figure is identified as human by its silhouette and its profile of a human face looking to the right, the installations in the body’s interior appear as an industrial complex. When looking at the image, it becomes clear that the illustration assembles specific machinery to represent a particular organ and its function within its natural place. For instance, the ventilation system stands for the lungs and the mechanical break-up of substances along the chain of conveyer belts represents the digestive tract. [2]

In the meantime, Germany faced an increasing antisemitic atmosphere and the author founded a Jewish humanistic lodge and became chairman of the Jewish Senior Aid. Unfortunately, Kahn was expelled from Germany in early 1933. The Nazis also did not hesitate to burn his books, confiscate them and ban them with their “list of harmful and unwanted writing“.

In the following years, Kahn resettled several times. He first emigrated to Palestine in order to continue his career and release his internationally best selling book ‘Our Sex Life‘. In this period, he also published to remakes of ‘The Life of Man‘, but unfortunately, his illustrations were abused in Germany for a short version including a new chapter with racist and antisemitic content. After living in Bordeaux for a short time, the restless man then had to escape via Portugal to the U.S. in 1941, which he accomplished with the help of his friend Albert Einstein. There, Kahn’s restart was a bit easier due to the English translation of his various works, especially his masterpiece Man in ‘Structure and Function‘. Two further books were then published in Switzerland. [1]

After his wife Erna separated from him, Kahn lived with his Danish-American co-worker Ellen Fussing. With her he returned to Europe for good and lived until 1960 mainly in Switzerland, including Lugano. During a vacation in Agadir, Kahn survived a severe earthquake in 1960 unharmed. With Ellen Fussing he was flown to Denmark and settled in North Zealand, opening a studio in Copenhagen in 1962. For health reasons, Kahn traveled to Ascona in the fall of 1967. He died in a clinic in Locarno on January 14, 1968.

With extraordinary metaphors in words and pictures, Kahn succeeded in presenting complex principles in nature and technology in a way that is generally understandable. The Berliner described man as “the most powerful machine in the world” and reflected the technical and cultural development of the Weimar Republic. He had a large part of the illustrations produced by draftsmen according to his specifications, and he ran his own studios in Berlin, New York and Copenhagen.

At yovisto academic video search, you may be interested in a video on The Anatomy of Movement of a Violin Player at the University of Stanford.