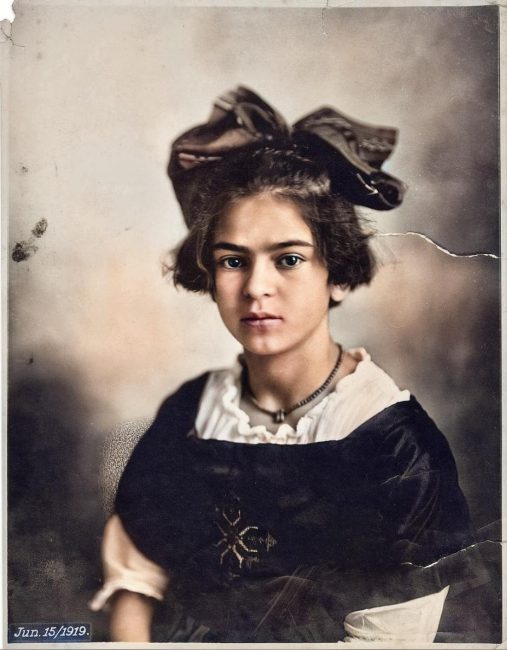 On July 6, 1907, Mexican painter Magdalena Carmen Frida Kahlo y Calderón was born. She is probably best known for her impressive self-portrait and is still admired as a feminist icon.

“A little while ago, not much more than a few days ago, I was a child who went about in a world of colors, of hard and tangible forms. Everything was mysterious and something was hidden, guessing what it was was a game for me. If you knew how terrible it is to know suddenly, as if a bolt of lightning elucidated the earth. Now I live in a painful planet, transparent as ice; but it is as if I had learned everything at once in seconds.”
– Frida Kahlo, in her letter to Alejandro Gómez Arias, 29 September 1926

Fridas father, Carl Wilhelm Kahlo (1871-1941), came from a middle-class family in Pforzheim. Wilhelm Kahlo’s mother died giving birth to his fourth child and his father remarried. Since Wilhelm did not get along with his stepmother, he emigrated to Mexico in 1890 at the age of 18. He settled as a photographer in Mexico City and married the Mexican María Cárdena. After four years he became a citizen and from then on was called Guillermo Kahlo. When María died in 1897, he married Matilde Calderón y Gonzalez from Oaxaca. 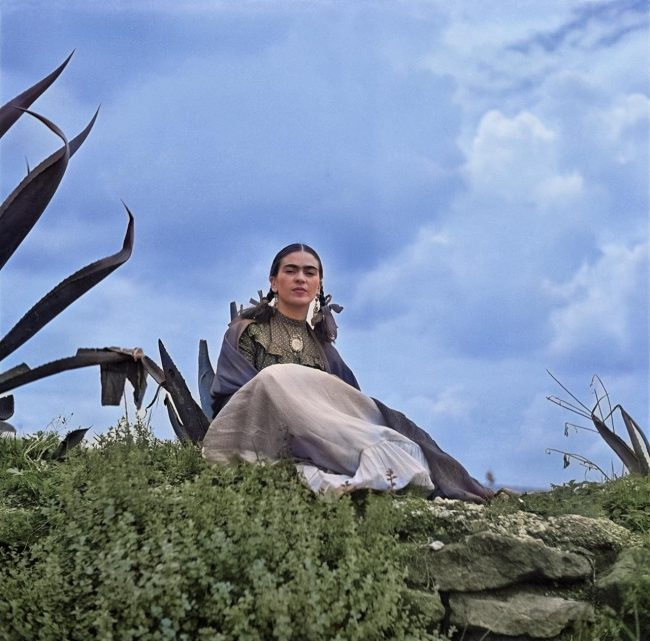 Frida Kahlo grew up in a small town near Mexico City, and when the Mexican revolution began, she was about three years old. As the revolution is considered as the most important social and political movement in the history of Mexico, it had great influence on the future artist. The revolution lasted about 10 years and had a critical effects on Kahlo’s childhood, since she witnessed numerous crimes and much armed violence through the years. Later on she even claimed that she was born in 1910 so people would associate her with the movements. When Frida was six years old, she fell ill with polio, and because of the long hospital camp, she retained a thinner and somewhat shorter right leg. The weak health, she suffered from during almost all of her life did not keep her from gaining a very strong personality. Kahlo became a leading member of school gangs and participated in various sport types including boxing, despite her illnesses.

In 1925, Frida Kahlo got into a serious accident, which she never really recovered from. After about 35 surgeries she was able to walk again, but suffered from pain through all of her life. This again highly influenced her personality and profession. In September 1926, at the age of 19, she painted her first self-portrait, the Self-Portrait with Velvet Dress. Contrary to all medical predictions, Frida had learned to walk again, although she suffered her whole life from the consequences of the serious accident. Painting became an expression of her mental and physical torments. As a result of the accident, she could not have children. She processed several miscarriages in pictures but they could not comfort her over the pain. Frida quit her medicine studies to start a painting career. She was later known for the numerous self portraits she completed. Her parents highly supported her, making it possible to paint and draw in bed.

In the later 1920’s, Frida Kahlo contacted Diego Rivera, who was already world-famous for his huge political-revolutionary murals (Murales). She deeply admired his works and one day visited him to ask if she had talent. Rivera had no doubts of Kahlo’s painting abilities and helped her explore her own work and to improve her motivation. Rivera began frequently visiting his ‘student’ and a friendship (and later marriage) evolved. Rivera was expelled from the Partido Comunista Mexicano in 1929 and Kahlo also left the party. Frida lamented the frequent infidelity of her husband, which she also processed in her emotional pictures. On 6 November 1939 she divorced him and fled to alcohol, affairs and her painting. But despite the difficulties Rivera always remained an important man in her life. On December 8, 1940, she married him a second time.

In the 1930s, together with Rivera, she supported the Russian revolutionary and once the most important man in the young Soviet Union alongside Lenin, Leo Trotsky, and in 1937 she donated him a house in Coyoacán. Frida still had several love affairs, besides Trotsky also with the photographer Nickolas Muray, the Costa Rican singer Chavela Vargas, Dolores del Río and the German Heinz Berggruen, who later became an important art collector. Next to Rivera, the overall Mexican culture influenced Kahlo’s works, in concerns of color and symbols. Often, she also combined her works with religious topics. Mostly Christian and Jewish elements are found in her works, often combined with surrealist effects. Probably one of the biggest achievements in her career depicted her invitation to France. The Louvre bought one of her images and she was to be the first Mexican artist of the 20th century to exhibit her work in this prominent European museum.

It was not until 1953 that her works were shown for the first time in a solo exhibition in her home country, a recognition she had long wished for. At this time already tied to her bed, she let herself be carried there to the vernisage. A little later her right lower leg was amputated (from the knee downwards). The general public firstly only recognized Kahlo as Rivera’s wife instead of respecting her own work. This changed a couple of years after her tragic and early death. Frida Kahlo died of pulmonary embolism on July 13, 1954. Some of her friends also did not rule out suicide, as the painter is said to have tried to take her own life earlier. There’s no proof of that, especially since Diego Rivera refused to autopsy her body. In the 1980’s however, several exhibitions in honor of Frida Kahlo were performed. Also a movie called ‘Frida, naturaleza viva‘, released in 1983 made her very well known and appreciated in the political and artistic sense.

At yovisto academic video search, you may enjoy a lecture, honoring Frida Kahlo in concerns of her overall challenging life and her famous works.