You are here: Home › communication › The Creation of the First Web Page 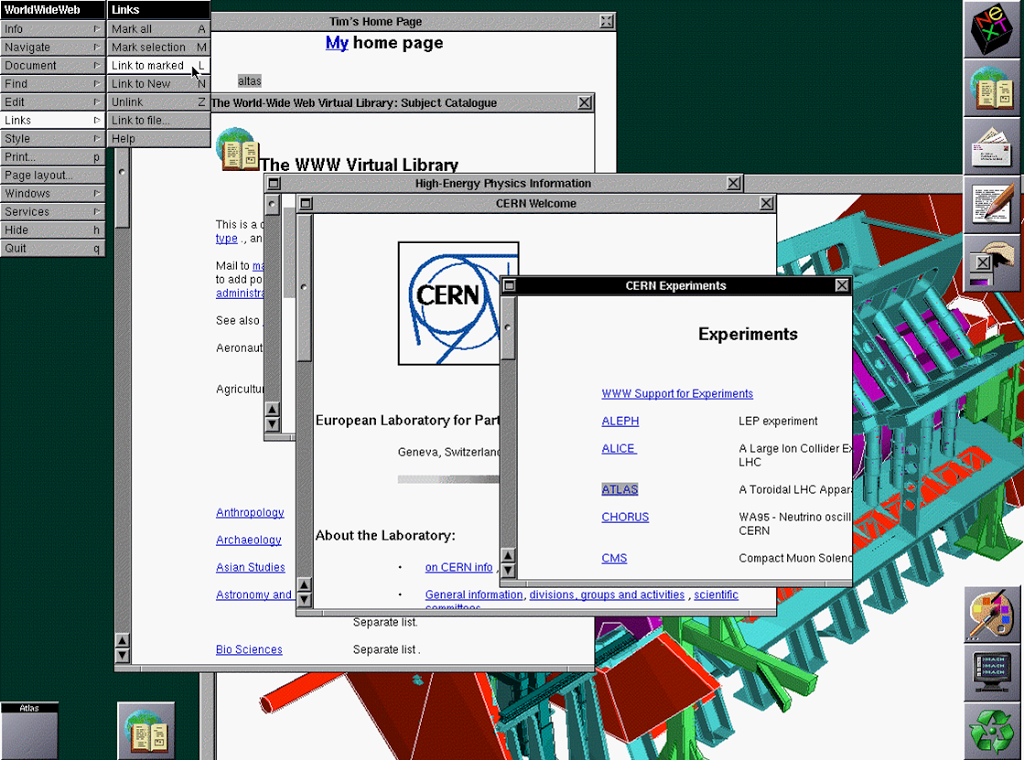 On November 13, 1990, one day after Tim Berners-Lee‘s and Robert Cailliau‘s publication of the concept of a world wide hypertext system [2], the first web page was created.[1] Today, everyday life without the World Wide Web, or simply the Web, has become next to impossible. Our daily live depends on news being spread over the web and ecommerce has become a convenient commodity. Nobody wants to live without it. Incredible, but only 25 years ago, most people lived in the stoneage compared to today’s online worlds.

Everything began at CERN

However, it all started at the European Organization for Nuclear Research (CERN),[6] in Switzerland, where physicists from around the world needed to share experimental data, and with no common machines and no common presentation software. Back in 1989, Tim Berners-Lee, a software consultant working for CERN, wrote a seminal proposal for “a large hypertext database with typed links” to support the document management at CERN, but it generated only little interest [4]. Nevertheless, encouraged by his superior Mike Sendall, Berners-Lee began to implement his system on one of the newly acquired NeXT workstation. Together with his colleague Robert Cailliau he tried to pitch their vision to the European Conference on Hypertext Technology in September 1990, but found no vendors who could appreciate their vision of marrying the hypertext concept with the Internet.

“The dream behind the Web is of a common information space in which we communicate by sharing information. Its universality is essential: the fact that a hypertext link can point to anything, be it personal, local or global, be it draft or highly polished. There was a second part of the dream, too, dependent on the Web being so generally used that it became a realistic mirror (or in fact the primary embodiment) of the ways in which we work and play and socialize.”
— Tim Berners-Lee, [11]

The Core Concepts of the Web

The proposal was an extension of the idea of the gopher information service but incorporated many new ideas and features, partly inspired by the concept of Ted Nelson‘s hypertext system Project Xanadu.[7] The main new technologies introduced by the proposal were HTML (HyperText Markup Language) to author the web documents being further on referred to as web pages, HTTP (HyperText Transfer Protocol) to transmit the web pages from the WWW server to the client browser, and the web browser client software program to receive and interpret data and display results. The Web basically worked according to the well known client-server architecture.

The Importance of the User Interface

Most important was that the client software program’s user interface would be consistent across all types of computer platforms so that users could access information from all types of computers. By Christmas 1990, Berners-Lee had built all the tools necessary for a working Web: the first web browser (which was a web editor as well) and the first web server. The first web site, which contained web pages describing the project itself, was published on 20 December 1990. The overall concept was made freely available to the public in 1991, waiving any patenting or royalty payments, which contributed significantly to today’s importance.

From Inside CERN up to the World

To encourage its adoption, an interface to the CERN Computer Centre’s documentation, to the ‘help service’ and also to the familiar Usenet newsgroups was provided. The first web servers were all located in European physics laboratories and only a few users had access to the NeXT platform on which the first browser ran. CERN soon provided a much simpler browser, which could be run on any system [3]. In 1991, the WWW project including all source code was made public, so that other programmers could develop their own browsers. The first server outside Europe was installed at the Stanford Linear Accelerator Center (SLAC) in Palo Alto, California, to host the SPIRES-HEP database. Accounts differ substantially as to the date of this event. The World Wide Web Consortium’s timeline says December 1992, whereas SLAC itself claims December 1991.

But, the real success of the WWW hit first with the arrival of easy-to-use graphical web browsers, such as e.g., Marc Andreesen‘s NCSA Mosaic….but this is already another story.[8] The WWW led to comprehensive, often described as revolutionary, upheavals in many areas of life, to the emergence of new economic sectors and to a fundamental change in communication behaviour and media use. Its cultural significance, together with other Internet services such as email, is partly equated with the invention of book printing.