You are here: Home › engineering › Ferdinand Porsche – Innovation as a Principle 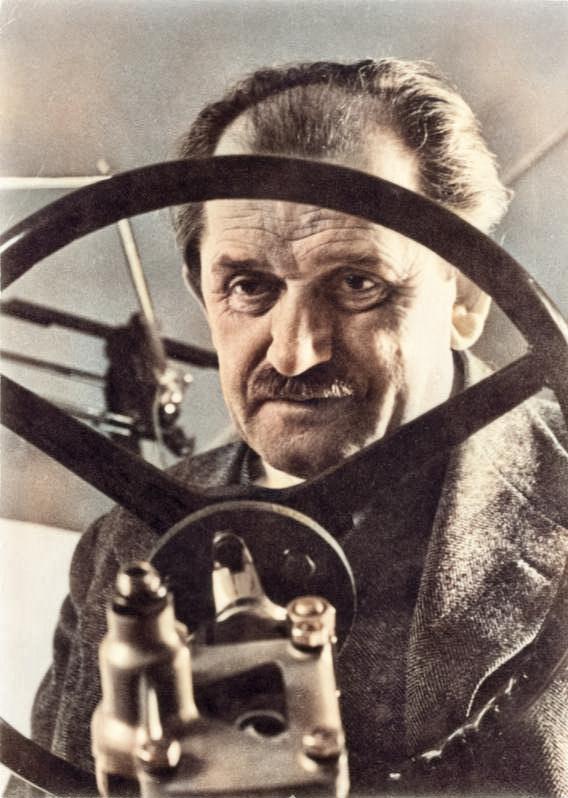 On September 3, 1875, Austrian-German automotive engineer Ferdinand Porsche was born. He is best known for creating the first hybrid vehicle (gasoline-electric), the Volkswagen Beetle, as well as the first of many Porsche automobiles. Porsche designed the 1923 Benz Tropfenwagen, which was the first race car with mid-engine, rear-wheel drive layout.

“If one does not fail at times, then one has not challenged himself.” (Ferdinand Porsche)

Today, Porsche is considered as a sportscar manufacturer. Of course, a sports car manufacturer that has produced some of the best sports cars ever. But, the founding father of the Porsche enterprise Ferdinand Porsche was an excellent engineer and inventor. Unfortunately, his legacy also is connected to Nazi Germany and the Third Reich. Porsche made a number of contributions to advanced German tank designs. He also made contributions in aircraft design and helped develop and manufacture retaliatory weapons (Vergeltungswaffen), such as the V-1 flying bombs. But, today’s article will focus on Porsche’s ambitions in automobile engineering and his automobile legacy.

Ferdinand Porsche was born in the time of the Austro-Hungarian Empire in northern Bohemia, in a small village called Maffersdorf, today in Czech Republic. From early age on, Porsche was fascinated by electricity. Although helping his father in his mechanical shop during the day, he managed to attend a Technical School in Reichenberg. At age 18, Porsche – thanks to a referral – landed a job with the Béla Egger Electrical company in Vienna, where he would sneak into the local university whenever he could after work. During his five years with Béla Egger, Porsche first developed the electric wheel-hub motor, the concept for which had been developed by American inventor Wellington Adams more than a decade earlier. Impressed by his technological skills, his superiors at Béla Egger promoted him from an employee to a management position.

In 1898, Porsche joined the Vienna-based factory Jakob Lohner & Co, that produced coaches for Emperor Franz Joseph I of Austria, and was just about to begin to construct automobiles. Their first design was the 1898 “System Lohner-Porsche“, a carriage-like car driven by two electric motors, directly fitted within the front wheel hubs, and powered by batteries. In December that year, the car was presented at the Paris World Exhibition, but its heavy batteries which put a weight of almost 2 tons to the car, limited its range as well as its ability to climb hills. Porsche drew the seminal conclusion to get rid of the batteries and use a small combustion engine as an electric generator, thus constructing the very first hybrid car. The car was a success and more than 300 were sold until 1906.[11] 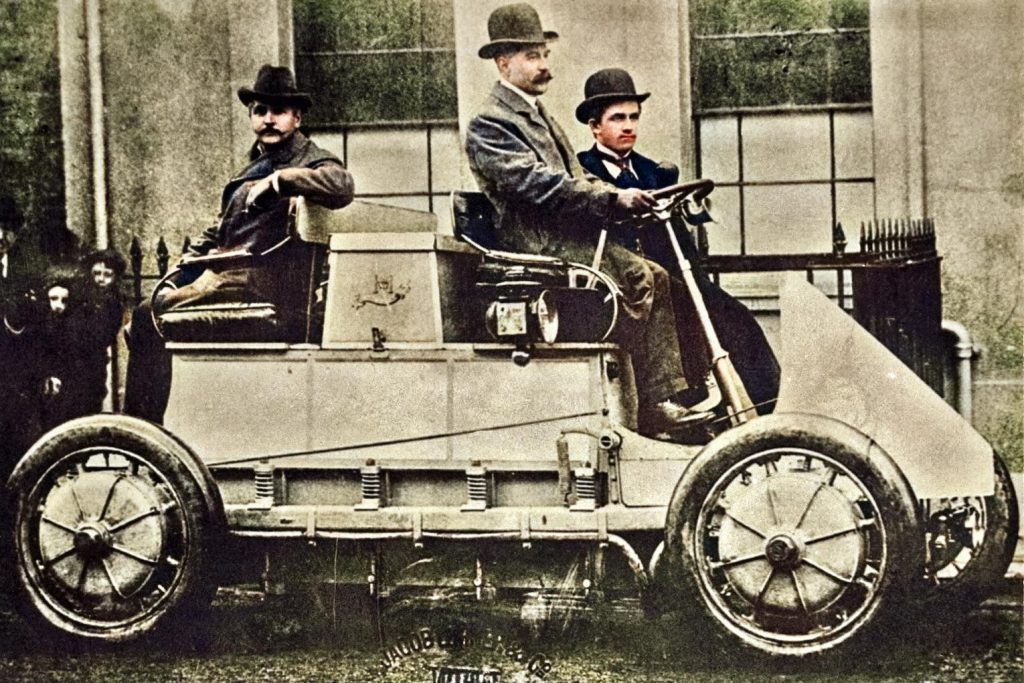 Lohner Porsche Race Car, 1902. At the wheel of the car: E. W. Hart from Luton, England. Next to it: Ferdinand Porsche. The vehicle has four wheel hub motors with an output of 1500 W each. The electric current is stored in accumulators with a total mass of 1800 kg.

In 1906 Porsche joined the car manufacturer Austro-Daimler as their chief designer, where he successfully advanced to managing director in 1916, when the Vienna University of Technology awarded him an honorary doctorate for his achievements as an engineer. In 1923, he joined the German Daimler Motoren Gesellschaft (later Mercedes-Benz after the Fusion with Benz) as Technical Director in Stuttgart, where he came up with several very successful race car designs. The heavy series of models equipped with superchargers that later culminated in the Mercedes-Benz SSK dominated its class of motor racing in the 1920s. Besides race cars, he designed a diesel powered truck and a popular automobile. 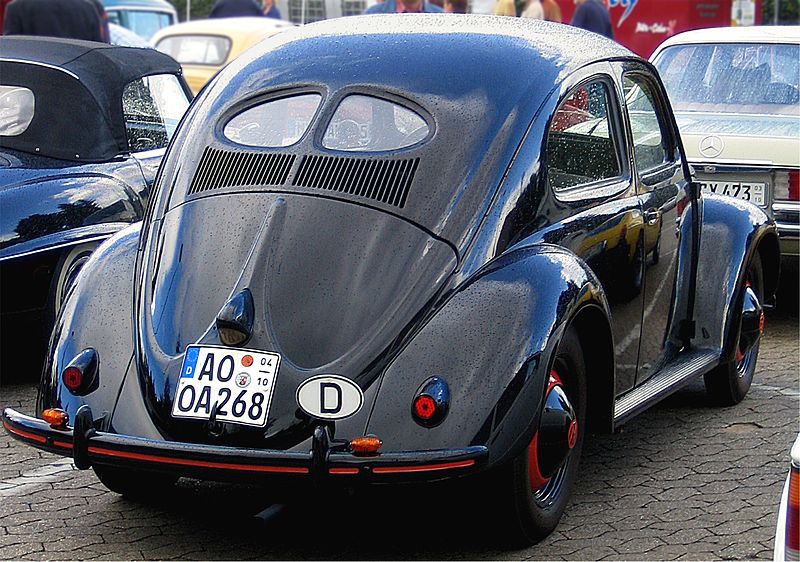 In 1930, Porsche opened his own engineering design firm in Stuttgart. To get the new company off the ground, Porsche took on the firm’s first project: the Wanderer, a small automobile designed to sell to the middle class for a company that merged soon thereafter with three others (Audi, DKW, Horch) in the conglomerate known as Auto Union. In 1933, at the Berlin Motor Show, German Chancellor Adolf Hitler announced the development of the people’s car: the nation should be motorized and that every German should own either a car or a tractor in the future. Porsche was chosen for the contract by Hitler to design the people’s car, which later should become the famous Volkswagen Beetle.[5] Although an entire city was founded to home the manufacturing company for the Volkswagen – which became today’s city of Wolfsburg -, its mass production only commenced after the end of World War II. 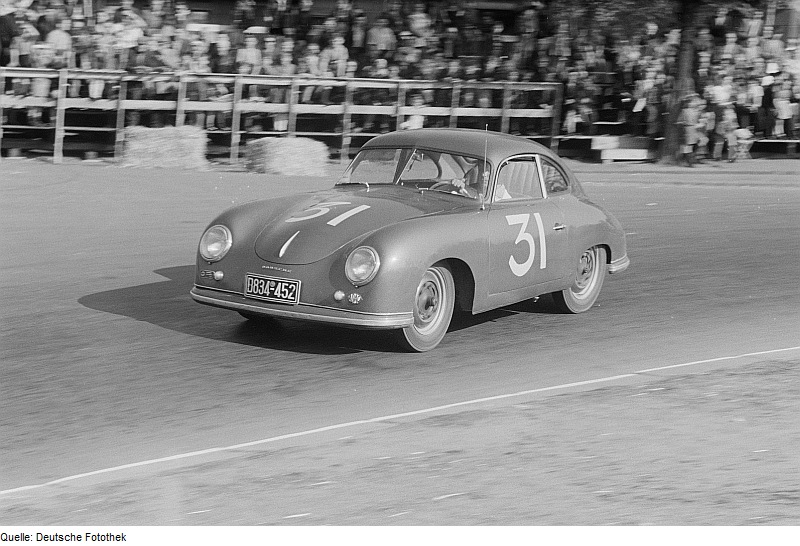 The Beginning of the Porsche Brand

After the war in November 1945, Porsche was asked to continue the design of the Volkswagen in France and to move the factory equipment there as part of war reparations. Due to differences with the French government about the deal, French authorities arrested Porsche and his son Ferry Porsche as war criminals. While Ferry was set free soon, Porsche was held in a Dijon prison for 20 months without trial. While his father was in captivity, Ferry tried to keep the company in business, and they also repaired cars, water pumps, and winches. After Porsche’s release from prison, the company also started work on a new design, the Porsche 356, the first car to carry the Porsche brand, of which more than 78,000 cars should be manufactured in the following 17 years. On January 30, 1951, a few weeks after Porsche visited Wolfsburg and the Volkswagen factory for the very first time after the war, he suffered a stroke and passed away.