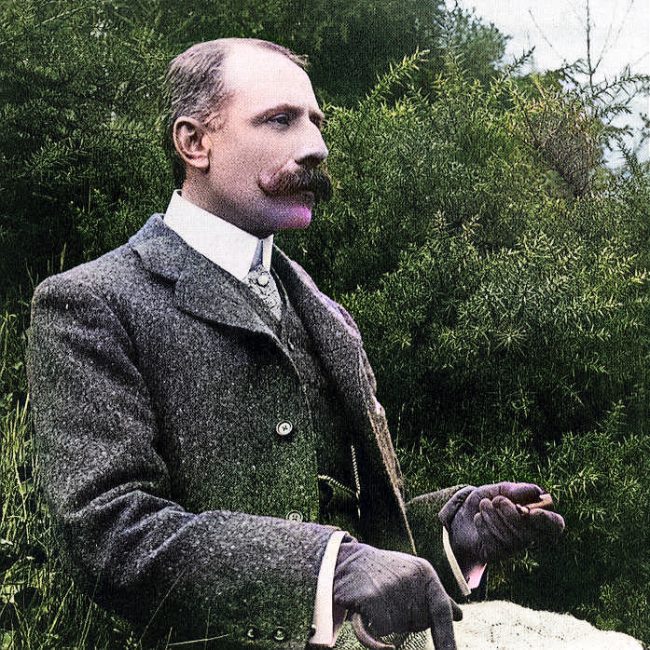 On June 2, 1857, English composer Sir Edward William Elgar was born. Many of his works have entered the British and international classical concert repertoire.  Among his best-known compositions are orchestral works including Enigma Variations, the Pomp and Circumstance Marches, concertos for violin and cello, and two symphonies.

“My idea is that there is music in the air, music all around us, the world is full of it and you simply take as much as you require.”
— Edward Elgar, In conversation in 1896, quoted in R J Buckley Sir Edward Elgar (London: Bodley Head, 1905), p. 32.

Edward William Elgar was born near the city of Worcester in the English West Midlands. His father owned a music shop and also tuned pianos, wherefore Elgar grew up in a musical atmosphere and taught hiself to play a great variety of instruments and taught himself in composing. He received a general education at Littleton. It is believed that he even began to learn German, hoping to being able to attend Leipzig Conservatory for a more advanced musical education. Unfortunately, his family could not afford to send him there and he became a clerk after school, which he didn’t like at all. In this period, Elgar also made his first public appearances as a violinist and organist. The passionate musician soon realized for himself, that his violin play would never reach perfection and it is assumed that he abandoned the dream of becoming a professional soloist soon. He started coaching and arranging music for a band and was appointed professor of the violin at the Worcester College for the Blind Sons of Gentlemen.

In the 1880s, Edward Elgar took some time to visit Paris and Leipzig, which had a great influence on the musician. In 1883, while a regular member of the orchestra for W. C. Stockley’s winter concert seasons in Birmingham, Elgar took part in a performance of one of his first works for full orchestra, the Sérénade mauresque. He also tried to publish some of his works but in that period of his life, Elgar had not luck and struggled financially.

In the 1890s, Elgar’s reputation as a composer grew and his works became more and more successful. Works of this period include ‘Three Bavarian Dances‘ and the ‘Serenade for Strings‘. In 1899, Edward Elgar produced the Enigma variations, which premiered in London. The general opinion considering this large-scale piece of art was positive, acknowledging his originality as well as craftsmanship. The Enigma Variations were written in 1898, when Elgar played a random melody on the piano that his wife Alice liked. In early 1899, he sent the score, which he originally called Variations on an Original Theme (the piece was later given its present name, Enigma), to the conductor Hans Richter. It was Hans Richter who performed the work at St. James Hall in London on June 19. The Enigma Variations made Elgar internationally famous. The ‘enigma’ from the title, however, does not refer to the assignment of which variation is dedicated to which friend, but to another enigma. According to Elgar, a different and larger theme ‘passes’ through and over the whole composition, but it is not played. And he composed the actual theme of the Enigma Variations as a countermelody to it.

In 1900, for the Birmingham Triennial Music Festival, Elgar set Cardinal John Henry Newman’s poem The Dream of Gerontius for soloists, chorus and orchestra, which received great reviews. After a performance of the piece in Düsseldorf, especially the German press was highly impressed and further performances across Europe and the United States followed. Newman’s poem – which Elgar greatly shortened for practical performance reasons – describes in a sequence of lyrical and dramatic episodes the journey of a soul after leaving the dead body. According to the teachings of the Catholic Church (Elgar was himself a Catholic), it passes through various regions of the afterlife, including purgatory, guided by a guardian angel, to finally behold the glory of God. A characteristic of the work is the through-composition of both parts, a compositional procedure that refers to Richard Wagner [10], as does the use of leitmotifs. 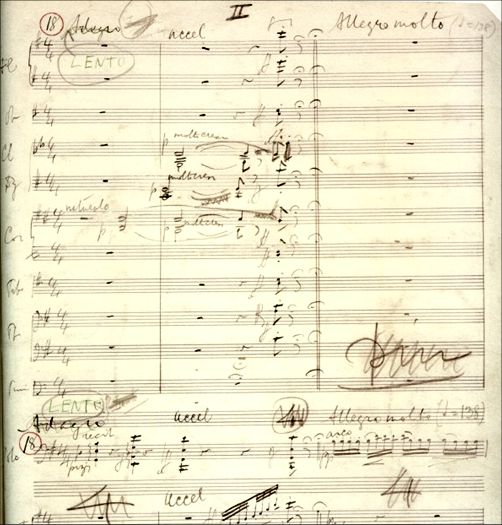 Edward Elgar, Fragment of manuscript of the opening of the second movement of the Cello Concerto (1919)

Edward Elgar’s probably most important and most recognized work were the Pomp and Circumstance Marches, composed between 1901 and 1930. On this day, March No. 1 in D is best known and had its premiere along with the second March in Liverpool in 1901. Elgar conducted the Liverpool Orchestral Society and both marches were played two days later at a London Promenade Concert in the Queen’s Hall London, conducted by Henry Wood. The audience was amazed and it has been reported that they called for double encore. In the United States March No. 1 is mostly known as ‘Pomp and Circumstance‘ and is played at numerous graduation ceremonies and personally, I also recall to have heard this at my High School graduation in the U.S. It is believed that it was first played at a graduation ceremony at Yale University in 1905, where Edward Elgar was invited to attend commencement and receive an honorary doctorate of music.

Edward Elgar reached world fame. In March 1904 a three-day festival of Elgar’s works was presented at Covent Garden, an honour never before given to any English composer. The king and queen attended the first concert, at which Richter conducted The Dream of Gerontius, and returned the next evening for the second, the London premiere of The Apostles. Elgar was knighted at Buckingham Palace in 1904 and held the post of Peyton Professor of Music at the University of Birmingham. As he approached his 50th birthday, Elgar also started working on his first symphony. It was published in 1908 and was extremely well received nationally and internationally. His last popular triumph was probably ‘The Violin Concerto‘.

Inoperable colorectal cancer was discovered during an operation in 1933. He told his consulting doctor, Arthur Thomson, that he had no faith in an afterlife: “I believe there is nothing but complete oblivion.” Edward Elgar died on 23 February 1934 at the age of 76.

At yovisto academic video search, you can enjoy ‘As Torrents in Summer’ by Edward Elgar, performed at the National Taiwan University.