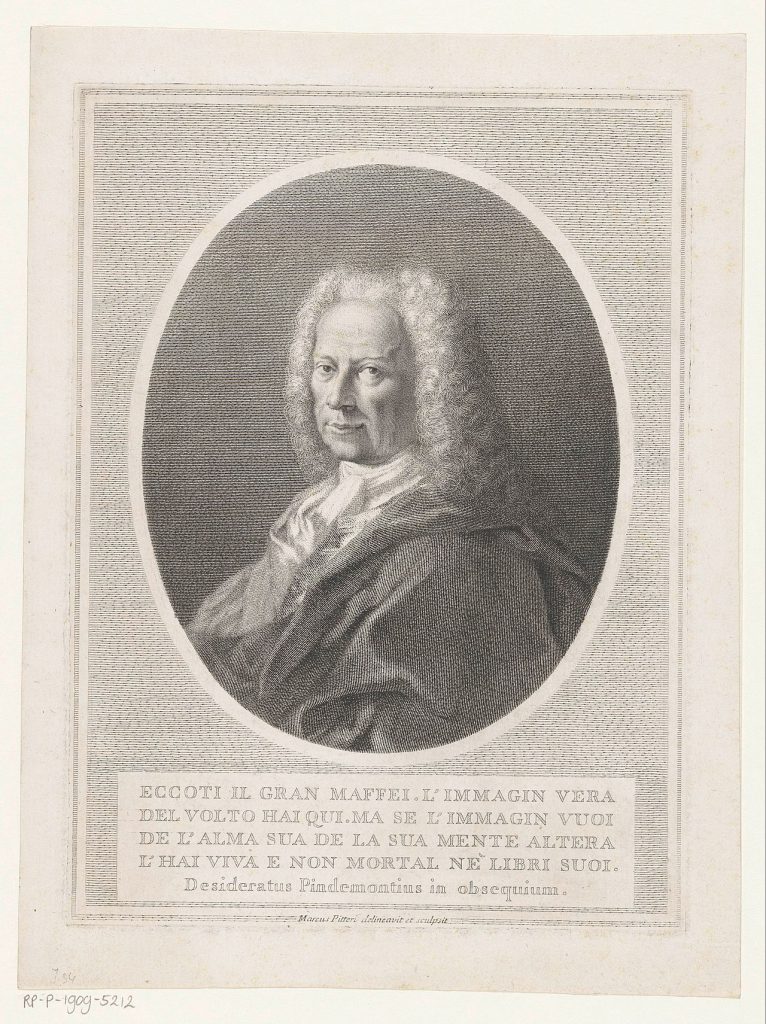 On June 1, 1675, Italian writer and art critic, author, antiquarian and humanist Francesco Scipione, marchese di Maffei was born. His publications on Etruscan antiquities stand as incunabula of Etruscology, he engaged in running skirmishes in print with his rival in the field of antiquities, Antonio Francesco Gori.

“The subject of a Tragedy is like that of a Chart, which gives rise to infinite different thoughts”
– Francesco Scipione, marchese di Maffei

Marchese di Maffei came from an influential family in Bologna. His brother was the General Alessandro Maffei, a Lieutenant General of Infantry in Bavarian service. Marchese di Maffei studied at the Jesuit College in Parma for five years and starting from 1698 in Rome. Maffei became a member of the Accademia degli Arcadi and on his return to Verona he established a local Arcadia. In 1703, Maffei volunteered to fight for Bavaria in the War of Spanish Succession and saw action in 1704 at the Battle of Schellenberg, near Donauwörth. His brother, Alessandro, was second in command at the battle.

In 1709, Marchese di Maffei went to Padua, where he worked along with the Venetian poet, librettist, and journalist Apostolo Zeno and with the scientist Antonio Valisnieri on the ambitious literary periodical the Giornale de’ Letterati d’Italia. Maffei met the Italian actor of the Comédie-Italienne in Paris, Antoine-François Riccoboni. The acquaintance with the actor led him to exert himself for the improvement of dramatic art in Italy and a revitalized Italian theatre. His masterpiece, the tragedy Merope, brought him more popularity in Europe. It was mostly famed for its rapid action and the elimination of the prologue and chorus. Further works for the theatre include Teatro Italiano, a small collection of works for presentation on the stage.

In 1710, Marchese di Maffei studied the manuscripts in the Royal Library at Turin and began to arrange the collection of objects of art which the late Carlo Emanuele, Duke of Savoy had brought from Rome. From 1718 he became especially interested in the archaeology of his native town, and his investigations resulted in the valuable Verona illustrata. Between 1718 and 1727 a first version of an exhibition of Maffei’s collection of Greek, Etruscan, Roman and early Venetian inscriptions, reliefs, urns, sarcophagi and sculptures was prepared. A first exhibition was revised in the following years and brought to a close in 1745. In 1732 he went to the south of France for archaeological research and from there he traveled to Paris, where he remained four years and was received as member of the Académie des Inscriptions et Belles Lettres. On a visit to London in 1736, he was elected a Fellow of the Royal Society and received at Oxford University, where he was honoured with a doctoral degree. In addition, he was one of the first members of the Accademia degli Agiati in Rovereto. In 1748 he was elected a foreign member of the Royal Prussian Society of Sciences. He gained importance in music history with a treatise on the first fortepianos by Bartolomeo Cristofori. 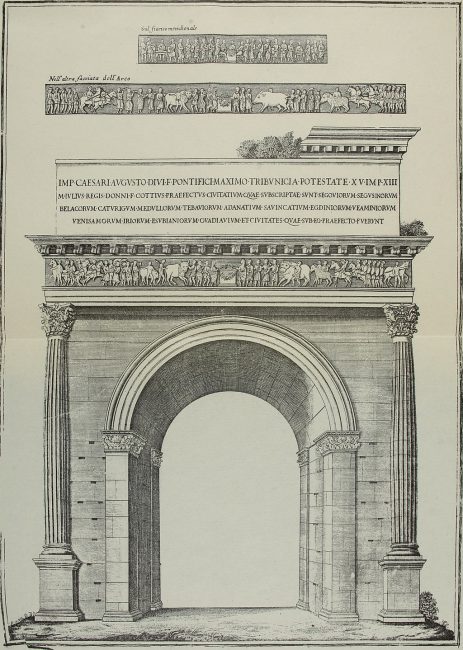 Maffei as a Historian

As a historian, Maffei distinguished himself with publications on medieval knighthood and diplomatic history. His encyclopedic interests led him to write about a myriad of subjects, including Catholic doctrine, ancient inscriptions, musical instruments, physics and astronomy, and to travel widely. After Maffei returned to Verona, he built a museum that he bequeathed to his native city along with the numerous archeological and artistic collections. The Jesuits requested him to write in defence of the orthodox system of grace against the doctrine of the Jansenists, which resulted in his Istoria teologica delle doctrine e delle opinione corse ne cinque primo secoli della chiesa in proposito della divina grazia, del libero arbitrio e della predestinazione, published at Trent, 1742. He also published a letter and a book arguing against the existence of supernatural magic and witches, that mixes both enlightenment thinking and theologic arguments based on scripture.  This letter on magic was subsequently printed in Augustin Calmet‘s dissertation on magic and vampires titled Traité sur les apparitions des esprits et sur les vampires ou les revenans de Hongrie, de Moravie, &c.(1751).

Besides his historical and archaeological studies he interested himself in physics and astronomy, and even built an observatory that he might study the movements of the stars. At the age of eighty he began to study Hebrew and he is said to have learned it in a few months. Francesco Scipione, marchese di Maffei died on 11 February 1755 in Verona at age 79. He bequeathed his collection of manuscripts to the canons of the cathedral of Verona.

“Friend, the whole world is full of troubles: it is easy to change the earth, but not the future”.
– Francesco Scipione, marchese di Maffei, (Polidoro, Act V p. 76)

The Etruscans and Etruscan Art, [7]