You are here: Home › geography › Édouard-Gaston Deville and the Perfection of Photogrammetry

On February 21, 1849, French-Canadian surveyor Édouard-Gaston Deville was born. Deville perfected the first practical method of photogrammetry, the making of maps based on photography.

Édouard-Gaston Deville was born at La Charité sur Noire, Nièvre, France. Educated at the naval school at Brest, Deville served in the French navy and conducted hydrographic surveys in the South Sea islands and Peru. In 1875, he retired and immigrated to Quebec with his widowed mother and his sister. Acting as astronomical assistant to Edward David Ashe, he resurveyed parts of the upper Ottawa valley for the Quebec Crown Lands Department. He obtained his credentials as provincial land surveyor in 1877 and the next year successfully passed examinations for the commission of dominion land surveyor and the more difficult ones for the prestigious qualification of dominion topographical surveyor. These achievements brought him to the attention of Surveyor-General Lindsay Alexander Russell, who invited him to join the examining board for dominion surveyors early in 1879. Over the next year he provided Russell with examination questions and astronomical tables, and cooperated in determining the longitude of Ottawa. Deville left the Quebec Crown Lands Department to join the federal Dominion Lands Survey in 1880. His first year found him working in the Touchwood Hills (Sask.). Such were his abilities that he was promoted inspector of surveys in 1881 and chief inspector the following year. The second position took him out of the field and into the Ottawa office. During Russell’s illness in 1884, he served as acting surveyor-general, a rank that became permanent on Russell’s retirement in 1885.[6]

In order to be able to meet the challenges of surveying in the Rocky Mountains, Édouard-Gaston Deville began experimenting with mapping methods developed by French army engineer Aimé Laussedat. Deville made use of Laussedat’s principle of elevated photography, and refined a technique of creating large-scale maps from these photographs. Deville then began to design and construct a lightweight field camera that could be carried long distances.

Reducing the Costs of Surveying

Deville’s camera probably was used for the first time in the Rocky Mountains in 1886. To use it, the surveyors would place the camera on a mountain peak, point the lens at the horizon and take panoramic shots of the surrounding peaks. Each view would be measured in relation to the survey station. Surveyors took photos in the short summer season, then would complete their calculations and mapping in their offices during the winter. This allowed larger areas to be surveyed more accurately, in less time, and at one-third the cost of conventional surveying. 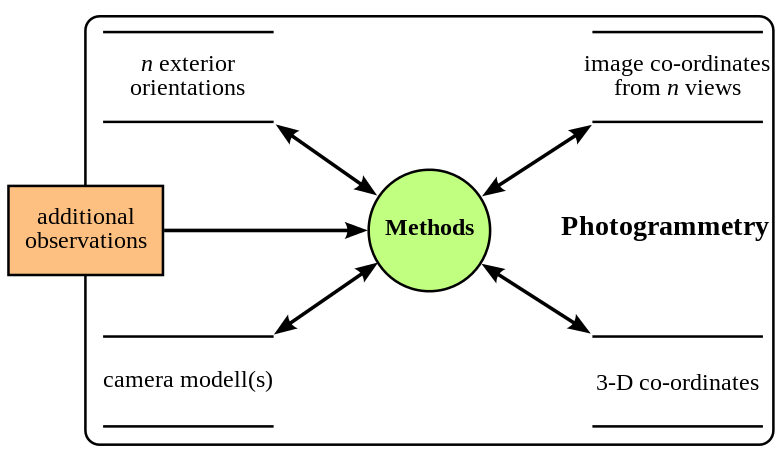 Édouard-Gaston Deville first introduced his new mapping technology at the 1983 Chicago World Fair and it soon became known as phototopography or photogrammetry. The American Society for Photogrammetry and Remote Sensing defined photogrammetry as the art, science, and technology of obtaining reliable information about physical objects and the environment through processes of recording, measuring and interpreting photographic images and patterns of recorded radiant electromagnetic energy and other phenomena. The theory of photogrammetry originally was developed in France and Prussia in the middle of the 19th century, parallel to the emergence of photography. The French officer Aimé Laussedat published his paper Métrophotographie in 1851, the German architect Albrecht Meydenbauer published his photogrammetric method for surveying buildings in 1858. He gave photogrammetry its name and in 1885 founded the first photogrammetric authority in the world, the Königlich Preussische Messbild-Anstalt. Also Édouard-Gaston Deville and Paul Gast were pioneers of this method. In 1907 Eduard von Orel invented the stereo autograph, which was commercially manufactured by the Carl Zeiss company from 1909. With this device it was possible for the first time to draw contour lines automatically by optical scanning of the photos (stereo image pairs). With the arrival of fixed-wing aircraft, surveyors could use Deville’s camera to create aerial photographs for surveying flat and remote parts of the country, as well as regions with high elevations.

Photogrammetry had a large effect in the field of topographic mapping, architecture, engineering, manufacturing, quality control, police investigation, geology, meteorology, and even film. For instance, by means of photogrammetry meteorologists are able to determine the actual wind speed of a tornado where objective weather data cannot be obtained. Photogrammetry was also used in The Matrix to combine live action with computer-generated imagery and also Star Wars Battlefront applied the technology.

Deville was instrumental in bringing about Canada’s adherence to the International Astronomical Union and the International Union of Geodesy and Geophysics, established in 1919. He continued to work until April 1924, when illness forced him to remain home.[6] Edouard-Gaston Deville died on September 21, 1924 in Ottawa, Ontario, Canada. During his lifetime, Canadian surveyors had used his phototopography to map 83,678 square kilometres, roughly the size of the Ireland (84,421 square kilometres) .