You are here: Home › chemistry › Dimitri Mendeleev and the Periodic Table of Elements 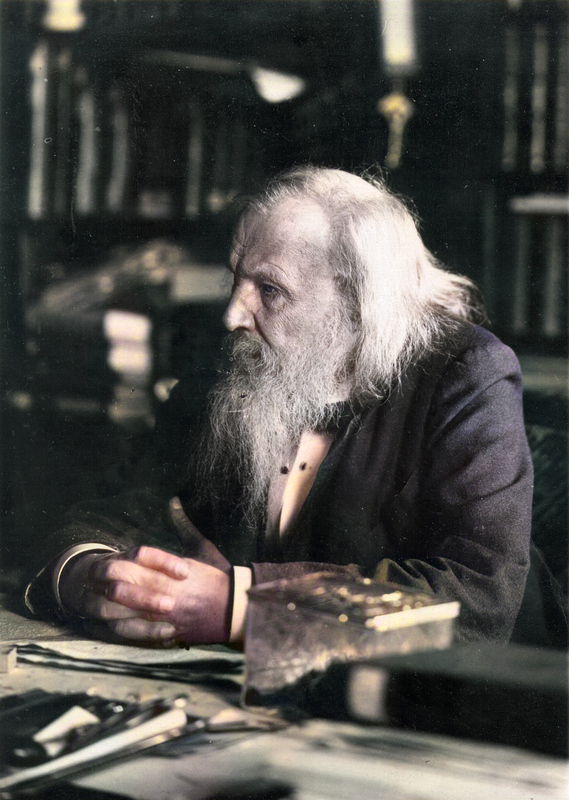 On February 2, 1907, Russian chemist and inventor Dimitri Ivanovich Mendeleev passed away. He is probably best known for his version of the periodic table of chemical elements. Furthermore, he used it to correct the properties of some already discovered elements and also to predict the properties of eight elements yet to be discovered.

“I wish to establish some sort of system not guided by chance but by some sort of definite and exact principle.”
— Dimitri Mendeleev, An Outline of the Systems of Elements

Dmitri Mendeleev was born on February 8,1834 in Tobolsk, Siberia,  as the youngest of a total of 14 children (while the number of children in literature varies up to 17) of the school director Ivan Pavlovich Mendeleyev and Maria Dmitryevna Mendeleyeva (née Kornilyeva). The parental home was a spiritual centre of the city, where intellectuals exiled to Siberia also met. His father was forced to give up his job early due to blindness and died early, which put the family in financial difficulties. Mendeleev, who had an early talent as a child, attended grammar school in Tobolsk from 1841 to 1849, where his grades were poor. In particular he had absolutely no interest in foreign languages and Latin. Mendeleev, who burned his Latin books with classmates at the graduation ceremony, remained resentful of the school conditions in Russia until the end of his life and was later actively involved in reform efforts.

Medical Science was out of the Question

In 1849, his mother sold her property and moved to St. Petersburg with the children via Moscow at the age of 57  to ensure the education of her youngest son. Attempts to be accepted at the University of Moscow or St. Petersburg failed for formal reasons because students from Siberia were not accepted there. Alternatively, medical studies were out of question when Mendeleev fainted during an autopsy, but with the exception of a permit it was possible to obtain admission to the Pedagogical Institute in St. Petersburg, the same institution his father originally hat attended.

Mendeleev turned to chemistry and mineralogy, made his first publications and received a medal from the institute after his graduation in 1855. Even though it is believed that Mendeleev was due to his temper quite unpopular, he graduated as one of the best students of his class. He received the candidate’s degree (with a thesis on Isomorphism in connection with other relationships of the crystal form to composition, 1855), but could not attain a master degree despite the recommendation of his teachers due to his illness. He was given less than a year to live, and was sent to Simferopol as a teacher to teach in Crimea, where the school was closed due to the Crimean War. He returned to St. Petersburg in 1856, graduated from the University of St. Petersburg with a master’s degree (with the Master’s thesis On Specific Volumes) and became a lecturer in chemistry at the University in 1857.

In 1860/61 Dimitri Mendeleev was awarded a fellowship with Robert Bunsen [9] and Gustav Kirchhoff [5] in Heidelberg, where he also attended the first International Congress of Chemists in Karlsruhe in 1860, where standadization methods in chemistry were discussed, which was of great use for Mendeleev’s future work on the periodic table.

The Principles of Chemistry

Back in Russia, Dimitri Mendeleev saw the need to improve Russian language chemistry textbooks and it has been handed down, that the scientist wrote a 500 page textbook in just 60 days called ‘Organic Chemistry‘. The work not only improved the education of chemistry in Russia but also increased Mendeleev’s reputation dramatically. He became the Chair of General Chemistry at the University of Saint Petersburg at the age of 33. Thus, Mendeleev became professor even before he finished his doctorate in 1864. He remained professor at the Institute of Technology until 1866, where he taught organic chemistry until 1872. Another major work by Mendeleev in this period, published in 1869, was The ‘Principles of Chemistry‘ which was translated into English, French, and German. [1,2]

Even though other scientists including John Newlands, Alexandre Béguyer de Chancourtois, and Julius Lothar Meyer [6,5] made important contributions to the Periodic Table, the main credit goes to Dmitri Mendeleev. According to the Royal Society of Chemistry, there were two problems regarding the establishment of a pattern for the elements. Back then, only 60 elements were discovered and as we know today, parts of their information was wrong. At first, the scientist wrote the elements’ properties on cards and he realized that when arranging the elements in order of increasing atomic weight, certain element types occurred regularly. Mendeleev’s‘s ideas were presented to the Russian Physico-chemical Society and published in the main German chemistry periodical of the time, Zeitschrift für Chemie. From the arrangement in the table, Mendeleev noticed that sometimes the atomic weights must be wrong, because the elements appeared at the wrong places. Today, we know that it is the atomic number, not relative atomic mass that decides an element’s position in the Periodic Table. However, in most cases they result in the same order.[3]

The Periodic Table of Elements by Mendeleev (1871)

Mendeleev spent some time trying to discover new elements predicted by his theory, including minerals, but in 1872 he turned to a new field of research, to which he devoted himself intensively for over a decade, the physical properties of gases. At the request of colleagues, he continued to teach at the university after his retirement in 1885 and only gave up in 1890, when the bureaucratic reaction to student unrest prompted him to do so. Despite his prestige, Mendeleev never became a member of the Russian Academy of Sciences, which failed to attempt admission in 1880. The reasons were partly political in nature. Mendeleev was an honorary member of the Moscow University, a member of the Russian Academy of Arts and a member of 90 foreign academies of sciences, including the Royal Society and the Prussian Academy of Sciences in Berlin.

Dimitri Mendeleev died on February 2, 1907, in St. Petersberg, at age