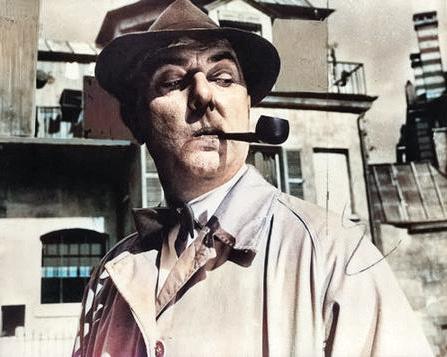 On October 9, 1908 Jacques Tatischeff, better known as cinematographer, actor, and comedian Jacques Tati was born as the son of Russian father Georges-Emmanuel Tatischeff,  director of Cadres Van Hoof, a prestigious picture framing company, and Dutch mother Marcelle Claire Van Hoof, in the little French village Le Pecq, Yvelines. I saw his short film “The school of postmen” when I was a kid and ever since I was fascinated by the kind of sophisticated humour that seems to connect all of his movies and which simply comes from careful observation of our daily lives.

Jacques Tatischeff seems to have been a mediocre student. However, he was quite sporty, played tennis and liked horseback riding. In 1923, he dropped out of school at the age of sixteen and joined the family business as an apprentice, where he was trained by his grandfather. In 1928, after his military service at Saint-Germain-en-Laye, he then completed an internship in London during which he learned about rugby. Upon his return, he discovered his comic talents as part of the Racing Club de France rugby team.

Although he had likely played music hall engagements before, his act was first mentioned in 1935, when he performed at the gala for the newspaper Le Journal to celebrate the French victory in the competition to set the transatlantic crossing record from Normandy. Among the honourable spectators was the influential writer Colette, who was rather impressed by Tati’s talents. Tati’s act also caught the attention of Max Trebor, who offered him an engagement at the Theatre-Michel, where he quickly became the star act. After an excursion to London, he returned to Paris in 1936 and was immediately hired as top billing at the ABC Théâtre alongside the singer Marie Dubas, where he would work uninterrupted until the outbreak of the Second World War.

Already in the 1930’s, Jacques Tati first gained experiences with short movies.  In September 1939 Tati was conscripted back into his old regiment. He saw action in the Battle of Sedan, in May 1940, when the German Army marched through the Ardennes into northern France. and was demobilised after the Armistice was declared on 22 June 1940.

Returning to Paris, Tati resumed his civilian profession as a cabaret performer. In early 1946 Jacques Tati and Fred Orain founded the production company Cady-Films, which would produce Tati’s first three films. In his first sort comedy film “School for Postmen” (L’École des facteurs), Tati did not only direct but also played the main character, a French postman adamant to prove he can be just as fast as American postmen at delivering mail. The film included several sight gags that involve his bicycle. He replicated most of the action here in his first major feature film, Jour de fête, released two years later.

Jour de fête (The Big Day) tells the story of an inept rural village postman who interrupts his duties to inspect the traveling fair that has come to town. Influenced by too much wine and a documentary on the rapidity of the American postal service, he goes to hilarious lengths to speed his mail deliveries aboard his bicycle. This self written film counts as the first French colored movie, even though it was mainly distributed as black and white copy due to technical problems with the new Thomson color system. Due to the reluctance of French distributors, Jour de fête was first successfully released in London in March 1949 before obtaining a French release on 4 July 1949, where it became a great public success, receiving the 1950 Le Grand prix du cinéma français.

Tati was known for being an individualist, which is also noticeable in his movies. His second movie ‘Les Vacances de Monsieur Hulot‘ (Monsieur Hulot’s Holiday) for example – which by the way is one of my very favorite movies(!) – introduces Tati’s main protagonist Monsieur Hulot, who is in a constant struggle with his modern environment. The special fact about this movie is that there are no real dialogues used, which Tati changed in later films to express his critical view on society. However, ‘Les Vacances de Monsieur Hulot‘ was a great success and caused Tati to win the Louis-Delluc-Prize in 1953 and to be nominated for the Academy Award in 1956 for the best script. Les Vacances de Monsieur Hulo follows Hulot’s adventures in France during the mandatory August vacation at a beach resort, lampooning several hidebound elements of French political and social classes. It was shot almost entirely in the tiny west-coast seaside village of Saint-Marc-sur-Mer in the Loire Atlantique region. The hotel in which Mr. Hulot stays (l’Hôtel de la Plage) is still there, and a statue memorialising the director has been erected on the beach

Tati’s next film, 1958’s Mon Oncle (My Uncle), was his first film to be released in colour. The plot centers on Mr. Hulot’s comedic, quixotic and childlike struggle with postwar France’s obsession with modernity and American-style consumerism, entwined with the relationship he has with his nine-year-old nephew Gérard. Mon Oncle quickly became an international success, and won that year’s Academy Award for Best Foreign Language Film, a Special Prize at Cannes, as well as the New York Film Critics Award.

In the 1960’s, Tati planned something bigger and surprisingly expensive. He built a huge set not far away from Paris, a whole new city district where the protagonist Hulot is wandering around, looking for Monsieur Girard, whom he desires talking to. Considered by many his masterpiece, Play Time (1967), shot in 70mm, was to be the most ambitious yet risky and expensive work of Tati’s career. Play Time had even less of a plot than his earlier films, and Tati endeavored to make his characters, including Hulot, almost incidental to his portrayal of a modernist and robotic Paris. Unfortunately the movie ‘Play Time‘ turned out not to being able to follow his previous successes, which caused him to stumble into debts and to completely withdraw from the film business. However, the movie was a critical success.

The Dutch-funded Trafic (Traffic), although originally designed to be a TV movie, received a theater release in 1971 and placed Monsieur Hulot back at the centre of the action. It was the last Hulot film, and followed the vein of earlier works that lampooned modern society. In the film, Hulot is a bumbling automobile inventor traveling to an exhibition in a gadget-filled recreational vehicle. Despite its modest budget, Trafic was still very much a Tati film, carefully staged and choreographed in its scenes and effects.

In 1977 Tati was awarded the Honorary César of the Académie des Arts et Techniques du Cinema. Weakened by serious health problems, Tati died on 5 November 1982, of a pulmonary embolism. In 2010, French director Sylvain Chomet published L’Illusionniste, an animated film based on an unpublished 1956 script by Tati, based on the French comedian’s famous comedian as the title hero.

However, Tati counts as a legendary filmmaker up to this day, always impressing his audience with his criticism on the modern culture and its technical developments as well as with his style of filmmaking. Film critic and historian Leonard Maltin once summarized his feelings about Tati in his Movie Encyclopedia:

“There aren’t too many filmmaking legends whose entire output can be counted on the fingers of both hands, but this towering, graceful, pipe-puffing auteur, a comedic genius often compared with Buster Keaton, achieved his reputation on the basis of six feature films. His theme, his style, his mise-en-scène, all suggested the eternal struggle between Man and Machine; his was a kind of intricate slapstick in which characters found themselves at the mercy of progress, and his affinity for silent-screen comedy was mirrored in his own nearly total abstinence from dialogue.”