You are here: Home › history › Clara Barton and the Start of the American Red Cross 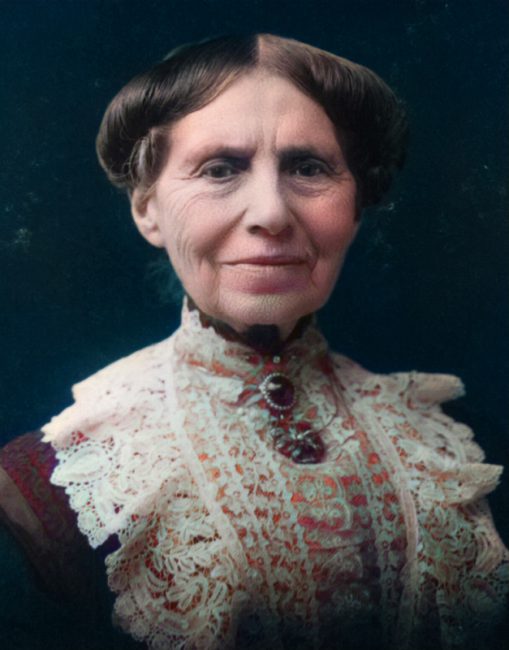 On December 25, 1821, American pioneering nurse Clarissa “Clara” Harlowe Barton was born. Barton is noteworthy for doing humanitarian work at a time when relatively few women worked outside the home. She worked as a hospital nurse in the American Civil War and was instrumental in the founding of the American Red Cross.

“You are getting the reward, dear Bessie for the simple nature devoid of vaulting ambition which you have always had. Keep it, I pray you. Personal ambition is a demon of unrest. Let those who want to strive to rise above themselves; but you dear Bessie, keep to your simple ways and you will always be a happy woman.”
– Letter from Clara Barton to Mrs. Elizabeth Jennings Pitkin, January 12, 1901

Clara Barton  was born in Oxford, Worcester County, Massachusetts, the daughter of Stephen and Sarah Barton. She was sent to school along with her brother Stephen when she was only three years old. There, it is assumed that she excelled in spelling early, but at the same time she was known to be extremely shy and timid. One day, a paternal cousin of Clara’s had died and left his wife with four children and a farm. The house needed to be repaired and painted badly and Clara offered her assistance. Then, at the age of only ten, Clara Barton appointed herself to nursing her brother David back to health after he fell from the roof of a barn and received a severe injury. She learned how to distribute the prescribed medication to her brother, as well as how to place leeches on his body to bleed him. In contrast to the doctors’ believes, David made a full recovery.

Clara’s parents persuaded her to become a schoolteacher and she received her certificate in 1839. She was very enthusiastic about her work and even started a campaign that allowed the children of workers to receive an education. In 1850, Barton decided to further her education by pursuing writing and languages at the Clinton Liberal Institute in New York. Two years later, she was contracted to open a free school in Bordentown and was quite successful and able to employ another woman to help her teach over 600 students. However, after Barton achieved to even further enlarge the school, the schoolboard found that the position as head of a large institution to be unfitting for a woman and she was replaced as principal by a man. Clara Barton continued as “female assistant” and worked in a harsh environment until she had a nervous breakdown and quit. In 1855, Barton became the first woman to receive a substantial clerkship in the federal government and at a salary equal to a man’s salary in the US Patent Office. Unfortunately, her position was eliminated one year later under the administration of James Buchanan.

During the American Civil War, Clara Barton was convinced by her father to help the soldiers and she returned to Washington to gather medical supplies. She received support to work on the front lines, especially by Senator Henry Wilson of Massachusetts. As part of her work Barton cleaned field hospitals, and served food in close proximity to many battles. In 1864, she was appointed as the “lady in charge” of the hospitals at the front of the Army of the James and she became known as the ‘Angel of the Battlefield’. Barton’s project ‘The Search for the Missing Men‘ began after the war, when many soldiers were labeled as missing while thousands of letters from distraught relatives to the War Department were going unanswered. After contacting President Lincoln, Barton was allowed to officially respond to these unanswered inquiries. It is believed that Clara Barton helped to find, relocate, and properly bury 13.000 individuals from Andersonville, Georgia in 1865 alone. She continued her work for four more years.

An Activist for Civil Rights

Later on, Barton achieved a wide recognition by delivering lectures around the country about her war experiences. She became an activist for civil rights. Barton was introduced to the Red Cross and Dr. Appia during a trip to Europe in 1869. He later invited her to be the representative for the American branch of the Red Cross and even help her find financial beneficiaries for the start of the American Red Cross. In 1873, Barton began to work on the project and finally succeeded during the administration of President Chester Arthur, using the argument that the new American Red Cross could respond to crises other than war such as natural disasters like earthquakes, forest fires, and hurricanes. She became President of the American branch of the society.

During the Spanish–American War, the society aided refugees and prisoners of the civil war. They became active in the floods of the Ohio river, provided Texas with food and supplies during the famine of 1887 and took workers to Illinois in 1888 after a tornado and that same year to Florida for the yellow fever epidemic. In 1897, responding to the humanitarian crisis in the Ottoman Empire in the aftermath of the Hamidian Massacres, Barton sailed to Constantinople and after long negotiations with Abdul Hamid II, opened the first American International Red Cross headquarters in the heart of Turkey. In the 1890s, Barton worked in hospitals in Cuba and performed her last field operation as President of the American Red Cross helping victims of the Galveston hurricane in 1900.

“To this day my seat on a saddle or on the back of a horse is as secure and tireless as in a rocking chair, and far more pleasurable. Sometimes, in later years, when I found myself suddenly on a strange horse in a trooper’s saddle, flying for life or liberty in front of pursuit, I blessed the baby lessons of the wild gallops among the beautiful colts.”
– Barton, Clara H. The Story of My Childhood. New York: Baker & Taylor Company, 1907.

Barton was forced to resign as president of the American Red Cross in 1904, at the age of 83 due to criticism of her mixing professional and personal resources. She had been forced out of office by a new generation of all-male scientific experts who reflected the realistic efficiency of the Progressive Era rather than her idealistic humanitarianism. After resigning, Barton founded the National First Aid Society.

Clara Barton continued to live in her Glen Echo, Maryland home which also served as the Red Cross Headquarters upon her arrival to the house in 1897. Barton published her autobiography in 1907, titled The Story of My Childhood. On April 12, 1912 at the age of 90 she died in her home.