You are here: Home › medical science › Sir Percivall Pott and his Efforts in Early Cancer Research 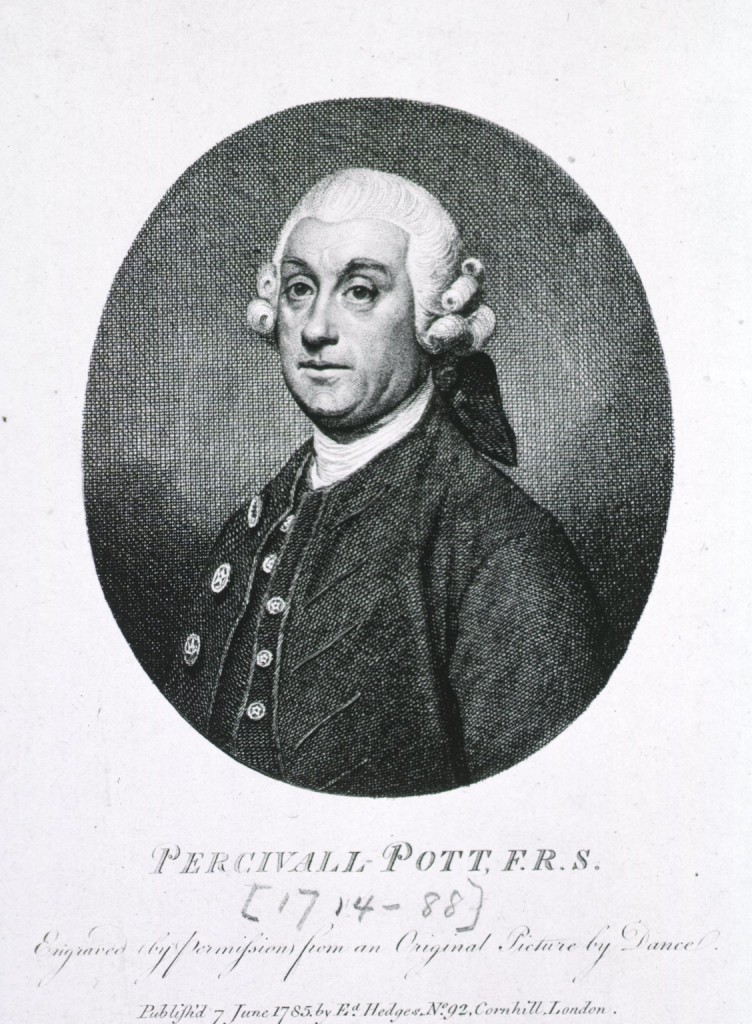 On January 6, 1714, English surgeon Sir Percivall Pott was born. Pott is considered one of the founders of orthopedy, and the first scientist to demonstrate that a cancer may be caused by an environmental carcinogen.

Percivall Pott was raised by his mother and Joseph Wilcocks, the bishop of Rochester, since his father died when he was still young. Pott attended a private school in Kent and later was an apprentice to an assistant surgeon to St Bartholomew‘s Hospital, Edward Nourse. There, Pott prepared and dissected cadavers for Nourse’s anatomy classesa and not only became educated in the basic principles of anatomy and medicine but also eventually perfected his surgical technique. In 1736, Pott himself was admitted to the Barbers‘ Company and was licensed to practise. Pott became assistant surgeon to St Bartholomew‘s in 1744 and full surgeon from 1749 till 1787.

In 1956, Percivall Pott fell from a horse and broke his lower leg. He proceeded to instruct his helpers to build a makeshift stretcher from a door and poles, which was then used to carry him home. Even though the recommended standard procedure back then was to amputate the leg, Nourse suggested to apply traction and pressure to the fracture to correct the positioning of the bones. Nourse’s technique worked, and Pott’s leg healed without complication. The approach was later further refined resulted in a substantial decline in amputations. Also, fractures of the lower leg similar to the type Pott suffered became known as Pott fracture.

A Treatise on Ruptures

A Treatise on Ruptures (1756) is considered the work that established Potts reputation as an outstanding medical writer. Abdominal hernias were a major topic in surgery at the time. In such inguinal hernias, abdominal viscera sometimes shift into the scrotum or the outer labia. Pott described a special kind of herniation, which he described in more detail in a smaller publication soon to follow. In male newborns and sometimes also in adults, he had repeatedly seen cases in which intestinal loops or parts of the tissue apron covering the abdominal organs touched the testicles directly and separating sheath structures were missing, which would have been expected according to the current doctrine.

Chimney Sweeps and the Evidence of Cancer

In 1775, Pott found an association between exposure to soot and a high incidence of scrotal cancer (later found to be a type of squamous cell carcinoma) in chimney sweeps. This unusual disease, later termed chimney sweeps’ carcinoma due to Pott‘s investigation, was the first occupational link to cancer, and Pott became the first person to associate a malignancy with an environmental carcinogen. Pott implicated chimney soot as a direct contact carcinogen to skin. In 1933, experiments with animals showed that painting coal tar onto skin would demonstrate the role of the first proven chemical carcinogen benzo(a)pyrene, which occurs in high concentrations in smoke and chimney soot, with the process that Pott first identified. Percivall Pott‘s investigations significantly contributed to the science of epidemiology and the Chimney Sweepers Act 1788, which was passed to try to stop child labour since many boys as young as four were being used as chimney sweeps. Percivall Pott described the sweeps‘ carcinoma:

“It is a disease which always makes it first attack on the inferior part of the scrotum where it produces a superficial, painful ragged ill-looking sore with hard rising edges…..in no great length of time it pervades the skin, dartos and the membranes of the scrotum, and seizes the testicle, which it inlarges(sic), hardens and renders truly and thoroughly distempered. Whence it makes its way up the spermatic process into the abdomen”

As part of the treatment, the diseased flesh was cut out or alternatively there was the application of an arsenic paste poultice. However, the cause of this cancer was unproved until the discovery of weak carcinogens in soot by Passley in 1922. Until then the most popular theory was that soot got trapped in the rugae of the scrotum and this caused a general irritation. Sweeps were not known for their attention to bodily hygiene and it was assumed they never washed their genitals. The youngest known victim, recorded in 1790 by James Earle (Pott’s son-in-law), was only 8 years old. According to later differentiated terminology, the cancers observed by Pott could be interpreted as squamous cell carcinomas; they have their origin in the damaged epidermis. For chimney cleaning work in the kingdom a minimum age of eight years was legally decreed in 1788, in 1840 it was increased to 21 years; the effectiveness is considered to be low.

As a surgeon, Pott was well respected and often assisted fellow surgeons. Pott was viewed as a mentor and even allowed other physicians and surgeons to live with him while under his guidance. Despite the surgical trends of his time, Pott did not agree with severe treatments and heroic medicine but rather preferred gentler forms. Percivall Pott’s son-in-law, James Earle, described Pott’s surgery as being “divested of great part of its horrors, became, comparatively, a pleasing study.” In 1765, Percivall Pott was elected Master of the Company of Surgeons, the forerunner of the Royal College of Surgeons of England. Even at an advanced age, Percivall Pott rode further distances to patients even in bad weather. He is said to have caught a cold, from which he did not recover.

Percivall Pott died on December 22, 1788, shortly before his 75th birthday, from pneumonia.