You are here: Home › literature › Bettina von Arnim and the Romantic Era’s Zeitgeist 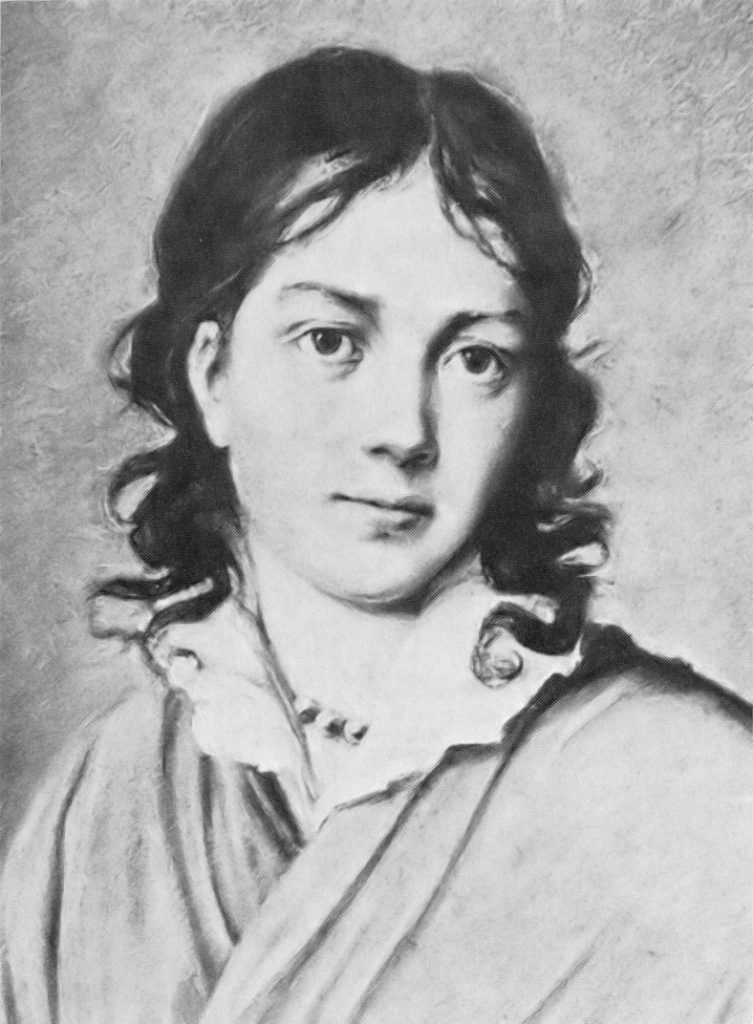 On April 4, 1785, German romantic author Elisabeth Catharina Ludovica Magdalena Brentano, better known as Bettina von Arnim was born. Moreover, she was a writer, publisher, composer, singer, visual artist, an illustrator, patron of young talent, and a social activist. She was the archetype of the Romantic era’s zeitgeist and the crux of many creative relationships of canonical artistic figures. Best known for the company she kept, she numbered among her closest friends Goethe, Beethoven, and Pückler and tried to foster artistic agreement among them.[2,6]

Bettina von Arnim was born at Frankfurt am Main, into the large family of an Italian merchant. Her grandmother, Sophie von La Roche, was a novelist, and her brother was Clemens Brentano, the great poet known for his lyric poems, libretti, and singspielen. He was a mentor and protector to her and inspired her to read the poetry of the time, especially Johann Wolfgang von Goethe.[2,7]

After being educated at a Ursulines convent school in Fritzlar until age thirteen, and after the death of her parents, Bettina lived for a while with her grandmother Sophie La Roche at Offenbach am Main. Sophie La Roche had produced what many critics consider the first “woman’s novel” in German, Geschichte des Fräulein von Sternheim (1771; The History of Lady Sophia Sternheim). In the literary circles of her grandmother Bettina became acquainted with many artists, scholars, German Jacobins, and French emigrants. Later she lived with her married sister Gunda and her brother-in-law, Friedrich von Savigny, the famous jurist, at Marburg. She formed a friendship with Karoline von Günderrode. The two friends acknowledged only natural impulses, laws, and methods of life, and brooded over the “tyranny” of conventionalities. In 1806, Günderrode committed suicide on account of a passion for the philologist Georg Friedrich Creuzer. Bettina later should write her epistolary novel “Die Günderode” in remembrance of her close friend. Her death put Bettina into a state of despondency. At the suggestion of her brother Clemens, she turned for comfort to Goethe’s novel Wilhelm Meisters Lehrjahre (1795-96; Wilhelm Meister’s Apprenticeship). Deeply moved by the work, Bettina began to identify with its main character, Mignon, and to imagine herself as Goethe’s spiritual child.

During the years of 1806 to 1808, von Arnim helped gather the folk songs that comprised Des Knaben Wunderhorn, the collaborative work of her brother and her future husband, Achim von Arnim, [9] later put to music by Gustav Mahler.[8] The collection became a touchstone of the Romantic musical and poetic style. In 1807 at age 22, Bettina made the acquaintance of Goethe in Weimar, for whom she entertained a significant passion, which the poet did not requite, though he entered into correspondence with her. Von Arnim idolized Goethe, who was 57 when she first met him. Her lively exchange of letters with him was published in 1835 as Goethes Briefwechsel mit einem Kinde (Goethe’s Correspondence with a Child). She had frequently visited Goethe’s mother in Frankfurt and recorded tales of the poet’s childhood. Goethe later used her notes when he was writing his autobiography, Dichtung und Wahrheit. She pursued Goethe with her attentions until 1811, when a public quarrel between her and Goethe’s wife, Christiane, caused Goethe to disavow her [2,3]. 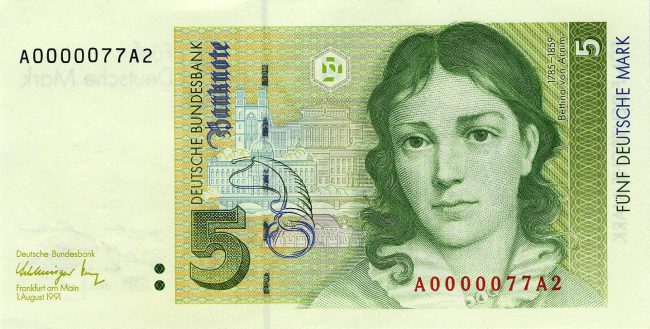 “Ein jeder muß ein inneres Heiligthum haben dem er schwört, und […] sich als Opfer in ihm unsterblich machen – denn Unsterblichkeit muß das Ziel sein.
(Each one must have an inner sanctuary to which he swears, and […] make himself immortal as a sacrifice in it – because immortality must be the goal.)”
– Bettina von Arnim, Die Günderode. Erster Theil. Grünberg und Leipzig: W. Levysohn, 1840. S. 282.

In 1811 Bettina married her brother’s closest friend, Achim von Arnim, also a prominent figure of German Romanticism.[9] The marriage lasted twenty years. The couple settled near Berlin and had seven children. Interestingly, the two kept separate residences. While Bettina was living in Berlin, her husband stayed most of the time at his family’s estate in Wiepersdorf. Achim died in 1831, but Bettina maintained an active public life. She began seriously pursuing her own literary career, publishing fictionalized biographies and autobiographies, political appeals for reform, and fairy tales.[4]

Her passion for Goethe revived, and in 1835, after lengthy discussions with the writer and landscape gardener Hermann von Pückler-Muskau,[10] she published her book Goethe’s Correspondence with a Child, which purported to be a correspondence between herself and the poet. She was a social and political activist who advocated free speech, a free press, freedom of religion, and relief for the country’s impoverished victims of industrialization. She collected documentary evidence on the living conditions of the poor and accurately predicted that they would eventually revolt.[4] Her most famous political work was her declaration of principles, Dies Buch gehört dem König (1843; This Book Belongs to the King). She even met Karl Marx in 1842, but she kept on to her idea of a “Volkskönig”, i.e. the king should be the first citizen of a society of citizens and create the state in cooperation, in which she wanted to live. In frustration about the failed revolution of 1848, she wrote Gespräche mit Dämonen (1852; Conversations with Demons) in which she stood up for the abolution of death penalty and the political equality of women and Jews.

She continued to write, inspire, and publish until her final days. In 1854 Bettina von Arnim suffered a stroke from which she never recovered. She died on January 20, 1859, surrounded by her family,