You are here: Home › engineering › The Benz Patent-Motorwagen No.1 – the Very First of its Kind 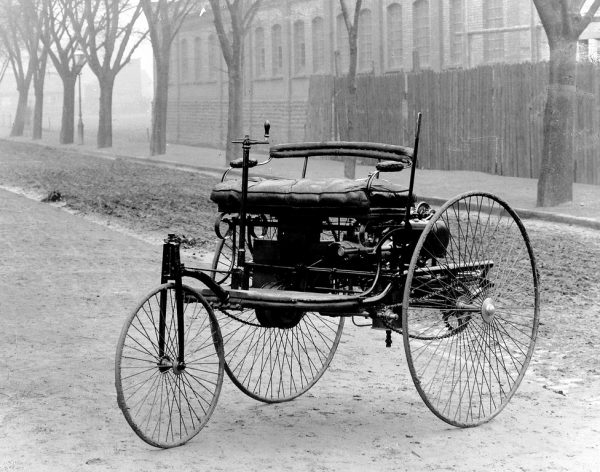 On November 2, 1886, the German imperial patent office granted Karl Benz the patent under the number 37435 for his automobile, the Benz Patent-Motorwagen No.1. Benz‘s automobile is widely regarded as the world’s first automobile, that is, a vehicle designed to be propelled by an internal combustion engine.

After developing a successful gasoline-powered two-stroke piston engine in 1873, Benz focused on developing a motorized vehicle while maintaining a career as a designer and manufacturer of stationary engines and their associated parts [1]. The Benz Patent-Motorwagen was a three-wheeled automobile with a rear-mounted engine. The vehicle contained many new inventions. It was constructed of steel tubing with woodwork panels. The steel-spoked wheels and solid rubber tires were Benz’s own design. Steering was by way of a toothed rack that pivoted the unsprung front wheel. Fully elliptic springs were used at the back along with a live axle and chain drive on both sides. A simple belt system served as a single-speed transmission, varying torque between an open disc and drive disc. The core of the car was a single-cylinder four-stroke engine with a displacement of 0.954 litres. Some details can still be found on engines today: crankshaft with counterweights, electric ignition and water cooling.

With a New Engine

This new engine produced 500 watts (2⁄3 hp) at 250 rpm in the Patent-Motorwagen, although later tests by the University of Mannheim showed it to be capable of 670 W (0.9 hp) at 400 rpm. It was an extremely light engine for the time, weighing about 100 kg. Although its open crankcase and drip oiling system would be alien to a modern mechanic, its use of a pushrod-operated poppet valve for exhaust would be quite familiar.

Benz dedicated several attempts to the ignition until he found a solution that was adapted to the then low performance of the battery current. He transformed the current with a spark inductor developed by Heinrich Daniel Rühmkorff to higher voltage. The spark plug was also an in-house development. The cooling of the internal combustion engine was a particular problem, because it could not be connected to a cooling water pipe like a stationary engine. Benz fell into a simple evaporation cooling (boiling cooling), which proved to be effective and sufficient at the low output. The engine was started by turning the flywheel courageously. Benz was not bothered by the fact that the fuel supply in the carburettor was not sufficient for a longer distance. After all, the vehicle’s propulsion system needed about 10 litres of the still dangerous “ligroin” for 100 kilometres.

Benz later made more models of the Motorwagen, model number 2 had 1.1 kW (1.5 hp)) engine, and model number 3 had 1.5 kW (2 hp) engine, allowing the vehicle to reach a maximum speed of approximately 16 km/h (10 mph). The chassis was improved in 1887 with the introduction of wooden-spoke wheels, a fuel tank, and a manual leather shoe brake on the rear wheels.

The first test drives took place in 1885 for reasons of secrecy in the factory yard and ended at the factory wall. The first “outing” on the open road – at night – took only a few minutes. After 100 meters the car stopped. In numerous experiments, however, the range was gradually improved. On 29 January 1886, the vehicle was finally applied for a patent at the Reichspatentamt (Reich Patent Office) under the number 37435. Benz’ son Eugen ran alongside him with a bottle of gasoline “to refill when the gasoline runs out” at the first public exit on the Ringstrasse in Mannheim on July 3, 1886, which was documented in a newspaper article. When presented to the public, the noisy car caused fear and terror. Passers-by fled the street when the monster thundered past. Emperor Wilhelm II reassured the people: “I believe in the horse, the car is only a temporary phenomenon“. Of course, the Emperor was totally off target.[2]

Benz’s wife, Bertha, financed the development process. According to modern law, she would have therefore received the patent rights, but married women were not allowed to apply for patents at the time. The original cost of the vehicle in 1885 was 600 imperial German marks, approximately 150 US dollars (equivalent to $3,998 in 2016). The car remained a unique piece, as did its direct successor, Patent Motor Car Number 2. It was first converted into a four-wheeled car and later cannibalized. It was reconstructed in 1903. This Benz Patent Motor-Car No. 1 is located today in the traffic centre of the Deutsches Museum in Munich. Overall, about 25 Patent-Motorwagens were built between 1886 and 1893.