You are here: Home › mathematics › Benoît Mandelbrot and the Beauty of Mathematics 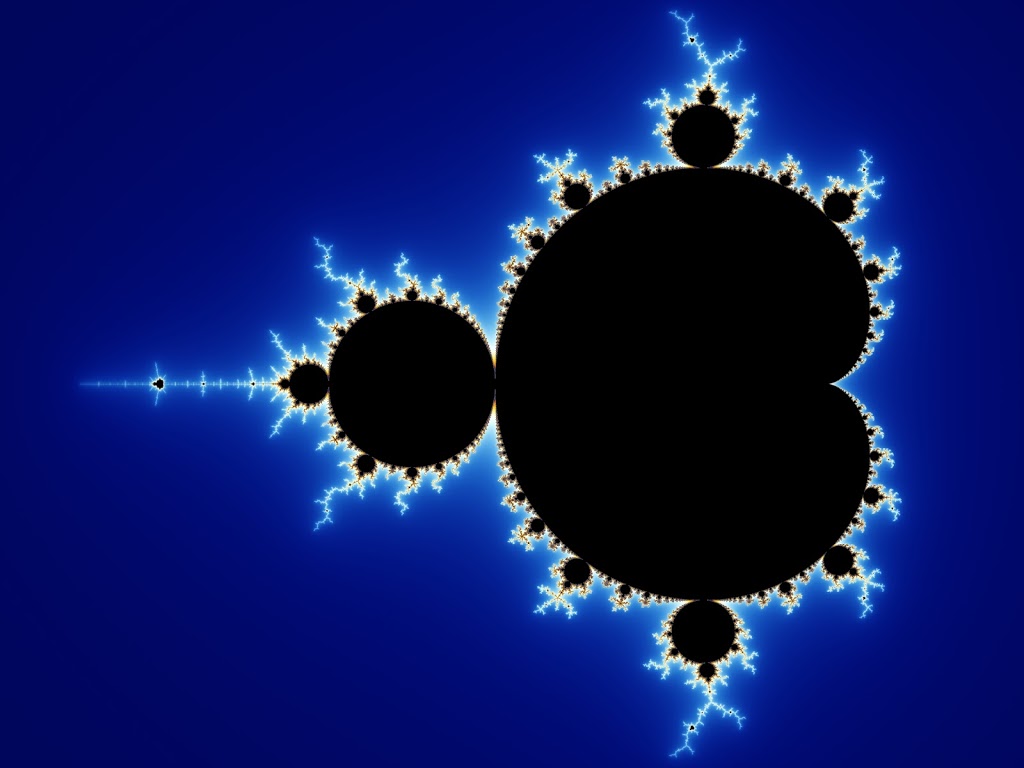 The Mandelbrot set, named after mathematician Benoite B. Mandelbrot, has become an iconic figure.

On November 20, 1924, French American mathematician Benoît B. Mandelbrot was born. Mandelbrot worked on a wide range of mathematical problems, including mathematical physics and quantitative finance, but is best known as the popularizer of fractal geometry. He was the one who coined the term ‘fractal’ and described the Mandelbrot set named after him.

“Clouds are not spheres, mountains are not cones, coastlines are not circles, and bark is not smooth, nor does lightning travel in a straight line.”
— Mandelbrot, in his introduction to The Fractal Geometry of Nature

Raise your hands, who of you has a set that is named after you? Ok, there are (were) quite some famous mathematicians who own a set: the Julia set, the Cantor set, Borel sets, the Zermelo–Fraenkel set (theory), …ok and then, I run out of set names. If you are searching at Google for ‘sets named after mathematicians‘ you will soon end up with a lot of ‘Mandelbrot’ results. Moreover in the 1980s the graphical representation of this set raised popular public interest in mathematics in general and especially in computer graphics. BTW, this worked also for me in high school and I developed a first interest in computer science when analyzing graphical representations of the Mandelbrot set for a school project. 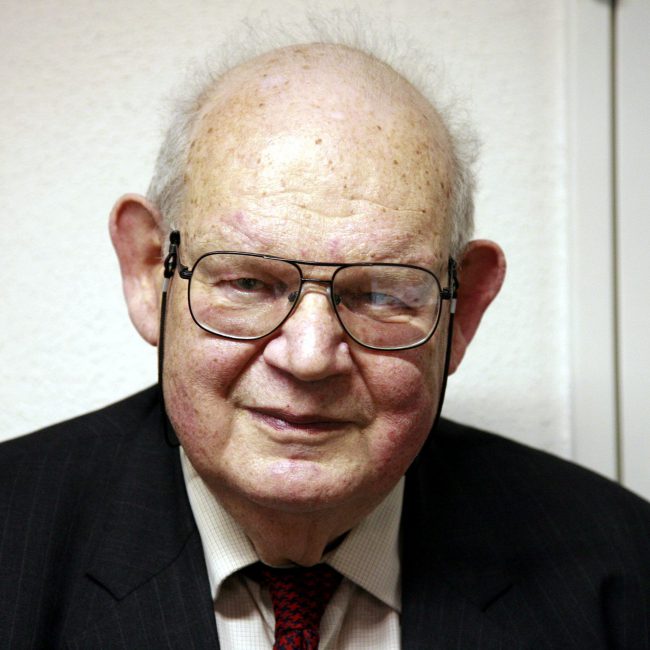 Benoît Mandelbrot was born in Warsaw into a Jewish family from Lithuania with strong academic tradition. His father, however, made his living buying and selling clothes while his mother was a doctor. It was his two uncles introduced him to the wonderworld of mathematics. Mandelbrot’s family emigrated to France in 1936, where he studied at the Lycée du Parc in Lyon and from 1945 to 1947 he attended the École Polytechnique, where he studied under Gaston Julia (sic! here is another man with a set named after him…. the famous Julia sets). From 1947 to 1949 he worked on a master degree in aeronautics at the California Institute of Technology. Returning to France, he obtained his Ph.D. degree in Mathematical Sciences at the University of Paris in 1952. From 1949 to 1958 Mandelbrot was a staff member at the Centre National de la Recherche Scientifique. During this time he spent a year at the Institute for Advanced Study in Princeton, New Jersey, where he was sponsored by the famous computer pioneer John von Neumann.[10]

Towards A New Geometry

From the time of the ancient Greeks, geometry had studied a restricted range of objects, i.e. lines, circles, planes, cylinders and so on. Euclid‘s geometry [11] did hold until the 19th century, where under the impact of new developments in physics, especially electricity and magnetism, mathematician scientists like Carl Friedrich Gauss [12] and Bernhard Riemann [13] extended geometry into higher dimensions. They examined properties such as curvature that were often far beyond our daily experience. This was the type of geometry that Einstein could apply to his theories of relativity. Nevertheless, even these new geometries relate to things that are smooth and even “tame” in some sense.

Chaos and the Concept of Self Similarity

“Being a language, mathematics may be used not only to inform but also, among other things, to seduce.”
— Benoit Mandelbrot, Fractals : Form, chance and dimension (1977)

Mandelbrot began looking at many different branches of science – turbulence in fluid mechanics and meteorology, price fluctuations in economics, the growth of cells in physiology, the clustering of galaxies, the shape of trees and plants – and realized that traditional smooth geometry was often at best a crude approximation. Mandelbrot wanted to show that what often appeared to be wild or random fluctuations that did not obey the laws of statistics could in fact be explained by simple mathematical laws or rules. His fundamental idea was that of “self similarity.” This approach enabled a geometry to be applied to things where it did not previously seem possible, as e.g., to clouds, coastlines or mountains.

Applications in Economics and Cosmology

Mandelbrot found out that the price fluctuations of the financial markets cannot be described by a normal distribution, but by a Lévy distribution, which theoretically has an infinite variance. Thus he also provided a possible explanation for the Equity Premium Puzzle, a paradox that occurs in financial markets. There is, according to economic theory, an excessively high difference between returns on risky securities (especially equities) and those considered relatively safe (e.g. government bonds). Although economic theory predicts the existence of a difference between these two categories of securities based on the assumption of risk aversion, its extent contradicts theoretical predictions. Mandelbrot also applied these ideas to cosmology. In 1974 he proposed a new explanation for the Olbers’ paradox of the dark night sky. He showed that the paradox can also be avoided without recourse to the Big Bang theory, if one assumes a fractal distribution of the stars in the universe, in analogy to the so-called Cantor dust.

The Discovery of the Mandelbrot Set

At IBM – Mandelbrot spent most of his career at IBM’s Thomas J. Watson Research Center, and was appointed as an IBM Fellow – Mandelbrot was able to use computers in a new way that has since become central to many branches of science. “I made them [the computer and computer graphics], not a tool to be called on only if needed, but a constant and integral part of my process of thinking,” he wrote. During his appointment as visiting professor of mathematics at Harvard University in 1979, Mandelbrot began studying fractal Julia sets that are invariant to certain transformations in the complex plane, previously studied by Gaston Julia and Pierre Fatou. These sets are generated by the iterative formula zn+1=zn2+c . Mandelbrot used computer plots of this set to study their topology depending on the complex parameter c. He discovered the Mandelbrot set named after him.

In 1982 Mandelbrot expanded his ideas and published them in his probably best-known book The Fractal Geometry of Nature. This influential book made fractals known to a wider public and silenced many of the critics who had previously dismissed fractals as programming artifacts. Mandelbrot left IBM in 1987 after 35 years with the company after IBM decided to dissolve its basic research department. He then worked in the mathematics department at Yale University, where he took his first permanent professorship in 1999 at the age of 75. When he retired in 2005, he was Sterling Professor of Mathematics. His last position was as Battelle Fellow at the Pacific Northwest National Laboratory in 2005.

Over the decades, Mandelbrot’s ideas have become incorporated into a new mathematical area called chaos theory and are now widely respected. The small asteroid 27500 Mandelbrot was named in his honor. In November 1990, he was made a Knight in the French Legion of Honor. Mandelbrot died from pancreatic cancer at the age of 85 in Cambridge, Massachusetts on 14 October 2010.

“My life seemed to be a series of events and accidents. Yet when I look back I see a pattern.”
— Benoit Mandelbrot, from “A Fractal Life” by Valerie Jamieson in New Scientist (November 2004)

Benoit B. Mandelbrot, MIT 2001 – Fractals in Science, Engineering and Finance (Roughness and Beauty), [9]