You are here: Home › biology › Barbara McClintock and Cytogenetics 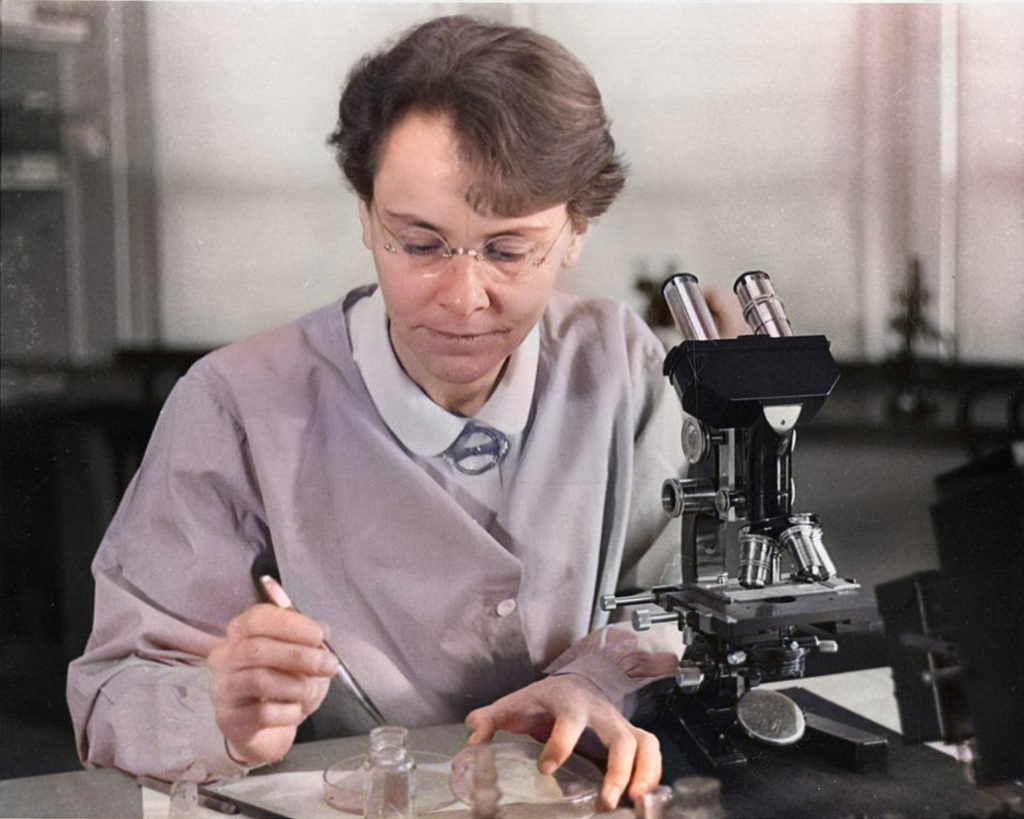 On June 16, 1902, American cytogeneticist Barbara McClintock was born. She is one of the world’s most distinguished cytogeneticists and received the 1983 Nobel Laureate in Physiology or Medicine.

“If chromosomes are broken by various means, the broken ends appear to be adhesive and tend to fuse with one another 2-by-2. This has been abundantly illustrated in the studies of chromosomal aberrations induced by X-ray treatment. It also occurs after mechanical rupture of ring-shaped chromosomes during somatic mitoses in maize and is assumed to occur during the normal process of crossing-over.”
– Barbara McClintock, (March 1941)[9]

Maybe, first of all you might ask, what is cytogenetics. Well, cytogenetics is a branch of genetics that is concerned with the study of the structure and function of the cell, especially the chromosomes. Chromosomes, as being a single piece of coiled DNA containing many genes, regulatory elements and other nucleotide sequences, were first observed in plant cells by Karl Wilhelm von Nägeli in 1842. Their behavior in animal (salamander) cells was described by Walther Flemming, the discoverer of mitosis, in 1882. The name was coined by another German anatomist, von Waldeyer in 1888.

Barbara McClintock was born Eleanor McClintock in Hartford, Connecticut, the third of four children born to physician Thomas Henry McClintock and Sara Handy McClintock. As a young girl, her parents determined that Eleanor, a “feminine” and “delicate” name, was not appropriate for her, and chose Barbara instead. Barbara was an independent child beginning at a very young age. She was described as a solitary and independent child, and a tomboy. The McClintock family moved to Brooklyn in 1908 and McClintock completed her secondary education there at Erasmus Hall High School, where she graduated early 1919. She wanted to continue her studies at Cornell University’s College of Agriculture, but her mother resisted sending McClintock to college, for fear that she would be unmarriageable. Luckily, her father intervened just before registration began, and she matriculated at Cornell in 1919.

Barbara McClintock’s interest in genetics began when she took her first course in that field at Cornell University in 1921. When McClintock began her career, scientists were just becoming aware of the relationship between heredity and events they could actually examine in cells under the microscope. She served as a graduate assistant in the Department of Botany for three years from 1924–27 and in 1927, following completion of her graduate studies, was employed as an Instructor, a post she held until 1931. McClintock’s cytogenetic research focused on developing ways to visualize and characterize maize chromosomes. In 1931, McClintock and Harriet Creighton demonstrated that cytological recombination of marked chromosomes correlated with recombination of genetic traits (genes).

How Genes move around on Chromosomes

Barbara McClintock had a hard time finding work. Even after she was hired at the University of Missouri, she quit after a short time because the biology chairperson told her that as a woman she would never be hired as a full professor. Finally in 1942, Carnegie Institute offered her a research position in their Department of Genetics. The Institute gave McClintock a cornfield, laboratory, and the ability to focus solely on research, where she spent the next 43 years studying genetic mutations by examining changes in plants and pigments in kernels of maize. While studying maize, McClintock noticed changing patterns of coloration in the kernels between generations, leading her to infer that the reason genetic material changes between generations is that genes move around on the chromosomes. Gregor Mendel’s principles of heredity were still fairly new at the time and acceptance of his principles was not widespread yet.[5] McClintock’s discovery was generally ignored by the male scientific world. She continued her career in cytogenetics studying the mechanics and inheritance of broken and ring (circular) chromosomes of maize. During her cytogenetic work, McClintock discovered transposons, that is the ability of genes to change position on the chromosome, a find which eventually led to her Nobel Prize in Medicine or Physiology in 1983. However, after several unsuccessful nominations, which were supported by many eminent scientists, she finally received the prize in 1983, although the number of previous nominations was small compared to other prizewinners, and it was also unusual that she received the prize alone and did not have to share it. In this respect, she was the third woman in the history of the Nobel Prize, after Marie Curie (1911, Chemistry) and Dorothy Crowfoot Hodgkin (1964, Chemistry).

In 1957, McClintock was asked to contribute her qualifications as a cytogeneticist to a project organized by the National Academy of Sciences and the National Research Council to study old Latin American varieties of corn. Initially, it was only to be a matter of instructing one of the scientists in Peru in cytogenetics in the institutions there. However, this led to her spending more than 20 years in Cold Spring Harbor, and in addition to her research in Cold Spring Harbor, she spent the winter months in research institutions from Mexico to Brazil examining the chromosomes of numerous samples of old maize varieties and gaining insights into their evolution.

McClintock was recognized throughout her career as one of the most distinguished scientists of the 20th century. In 1944, she became the third woman elected to the National Academy of Sciences. She was the first woman to become president of the Genetics Society of America, to which she was elected in 1945. In 1971, President Richard M. Nixon awarded McClintock the National Medal of Science. At the age of 81, she was awarded the Nobel Prize in Physiology or Medicine for her “discovery of mobile genetic elements.” She was the first woman to receive an unshared Nobel Prize in that category. McClintock felt that the media attention she received through the awards was above all burdensome. However, she continued to actively participate in the annual symposia in Cold Spring Harbor and followed the relevant professional literature. On her 90th birthday, which was celebrated at the home of James Watson, the head of Cold Spring Harbor Laboratories, the book The Dynamic Genome was published in honor of McClintock. Co-editor Nina Fedoroff later wrote that McClintock described the party as the best of her life. She died a few months later.