You are here: Home › literature › The Literary Decadence of Arthur Machen

On March 3, 1863, Welsh author and mystic Arthur Machen was born. He is best known for his influential supernatural, fantasy, and horror fiction. His novella The Great God Pan (1890) has garnered a reputation as a classic of horror. Stephen King has called it “Maybe the best horror story in the English language“.

“For, usually and fitly, the presence of an introduction is held to imply that there is something of consequence and importance to be introduced.” (Arthur Machen)

Machen was born Arthur Llewelyn Jones in Caerleon, Monmouthshire, Wales. Machen was descended from a long line of clergymen, his father John Edward Jones being vicar of the parish of Llanddewi Fach. Jones had adopted his wife’s maiden name, Machen, to inherit a legacy, legally becoming “Jones-Machen”. His son was baptised under that name and later used a shortened version, Arthur Machen, as his pen name. A solitary child, he learned first to love the gentle slopes of the nearby Soar Brook, then later the more awesome fastnesses of the Black Mountains which lay to the north, and to the east the ancient forest of Wentwood and the remoter Severn Valley.[1] Machen’s preference for occult subjects has been traced to his father’s library, in which he read already at age eight, in which besides others he found he found also the Waverley Novels, a three-volume edition of the Glossary of Gothic Architecture, and an early volume of Tennyson.[5]

At the age of eleven, Machen boarded at Hereford Cathedral School, where he received the standard classical education for a middle class boy. Family poverty ruled out attendance at university, and Machen was sent to London, where he sat exams to attend medical school but failed to get in. Machen, however, showed literary promise, publishing anonymously in 1881 a long poem “Eleusinia” on the subject of the Eleusinian Mysteries. In London, he lived in relative poverty, attempting to work as a journalist, as a publisher’s clerk, and as a children’s tutor while writing in the evening and going on long rambling walks across London.

Translations and first own Works

In 1884 he published the pastiche The Anatomy of Tobacco, and secured work with the publisher and bookseller George Redway as a cataloguer and magazine editor of Walford’s Antiquarian, a task for which Machen’s already wide reading and antiquarian interests equipped him well. This led to further work as a translator from French, translating the Heptameron of Marguerite de Navarre, Le Moyen de Parvenir (Fantastic Tales) of Béroalde de Verville, and the Memoirs of Casanova. Machen’s translations in a spirited English style became standard ones for many years. He also worked on and found publication for his own book of Rabelaisian romance, The Chronicle of Clemendy, his first true work of fiction.[1]

In 1887, the year his father died, Machen married Amelia Hogg, an unconventional music teacher with a passion for the theatre, who had literary friends in London’s bohemian circles. Amelia also introduced Machen to the writer and occultist A. E. Waite, who was to become one of Machen’s closest friends. Soon after his marriage, Machen began to receive a series of legacies from Scottish relatives that allowed him to gradually devote more time to writing.

“You may think this all strange nonsense; it may be strange, but it is true, and the ancients knew what lifting the veil means. They called it seeing the god Pan.” (Arthur Machen, The Great God Pan, 1894)

Very suddenly, around 1890, Machen’s writing took a new turn: it became sharply contemporary in idiom and interest. A series of short pieces were published in 1890 and 1891 in a variety of contemporary newspapers and journals; many qualify as fantastic fiction, set in the world we recognise, yet moving into impossibilities beyond its boundaries; and many deal with gothic themes, not far from horror.[1] This led to his first major success, The Great God Pan. It was published in 1894 by John Lane in the noted Keynotes Series, which was part of the growing aesthetic movement of the time. Machen’s story was widely denounced for its sexual and horrific content and subsequently sold well, going into a second edition. The author, H. P. Lovecraft, later commented: “No one could begin to describe the cumulative suspense and ultimate horror with which every paragraph abounds.” [6] 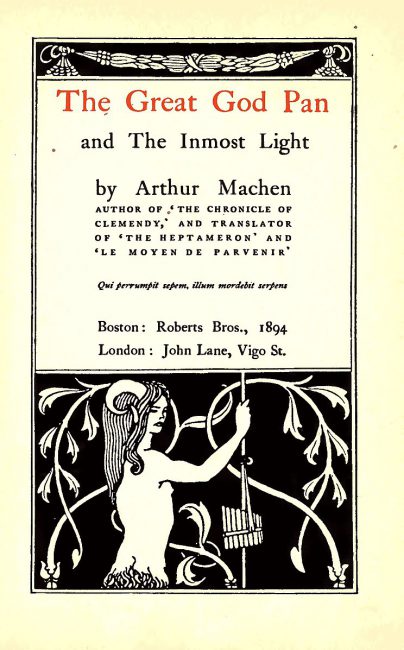 Machen next produced The Three Impostors, a novel composed of a number of interwoven tales, in 1895. The novel and the stories within it were eventually to be regarded as among Machen’s best works. However, following the scandal surrounding Oscar Wilde [7] later that year, Machen’s association with works of decadent horror made it difficult for him to find a publisher for new works. Thus, though he would write some of his greatest works over the next few years, some were published much later. These included The Hill of Dreams, Hieroglyphics, A Fragment of Life, the story “The White People“, and the stories which make up Ornaments in Jade.

In 1899, Machen’s wife Amy died of cancer after a long period of illness, which had a devastating effect on Machen. His recovery was helped by his sudden change of career, becoming an actor in 1901 and a member of Frank Benson’s company of travelling players, a profession which took him round the country. Machen also was at this time investigating Celtic Christianity, the Holy Grail and King Arthur. Publishing his views in Lord Alfred Douglas‘s The Academy, for which he wrote regularly, Machen concluded that the legends of the Grail actually were based on dim recollections of the rites of the Celtic Church. These ideas also featured strongly in the novel The Secret Glory which he wrote at this time, marking the first use in fiction of the idea of the Grail’s surviving into modern times in some form, an idea much utilised ever since. 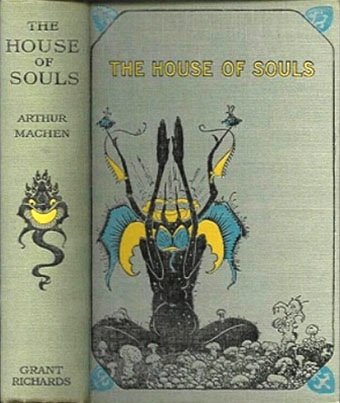 Suddenly, He was a Star

The next few years saw Machen continue with acting in various companies and with journalistic work, but he was finding it increasingly hard to earn a living and his legacies were long exhausted. Finally Machen accepted a full time journalist’s job at Alfred Harmsworth’s London Evening News in 1910, but he did not really like this profession. Machen’s dismissal from the Evening News in 1921 came as a relief in one sense though it caused financial problems. However Machen was recognized as a great Fleet Street character by his contemporaries and he remained in demand as an essay writer for much of the twenties. Then, suddenly, he discovered he was a star. His 1890s stories had been discovered by a generation of young Americans who, after the end of the war, had embraced many of the aims and interests of British 1890s aestheticism. By 1925 the Machen boom was over. Sadly, the author himself had not profited enough from it to be able to spend his declining years in comfort.[1]

Machen remained determined to take readers into worlds of mysticism and the supernatural. In a society gripped by Christian zeal, he drew on pagan and occult ideology to energise his writing. At a time when scientific rationalism was coming fully to the fore, Machen and other writers of weird fiction continued to argue for the mystical experience as an important tool for understanding the modern world. H. P. Lovecraft‘s Cthulhu mythos was heavily influenced by Machen [6], and through it Machen’s ideas are at the heart of the modern horror genre and the work of writers like Clive Barker and Stephen King. [4]

At yovisto academic video search you can learn more about the literary weird fiction genre of Arthur Machen in the lecture of Amy H. Sturgis on ‘The Pulps, the Editors, and Scientifiction‘.