You are here: Home › anthropology › Ales Hrdlicka and the Origin of the Americans 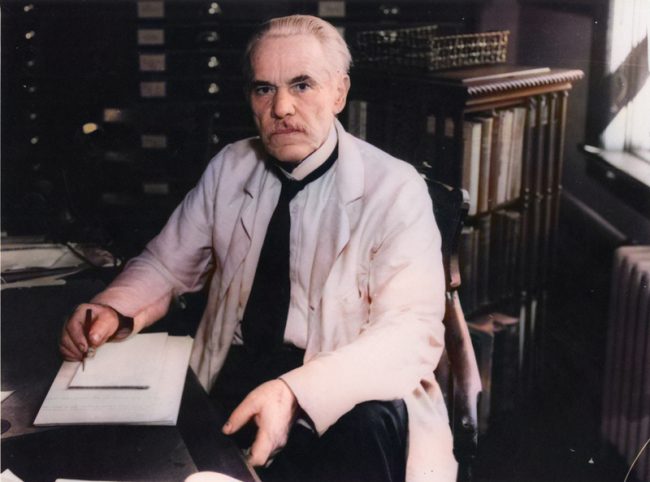 On March 29, 1869, Czech anthropologist Ales Hrdlicka was born. Hrdlicka is known for his studies of Neanderthal man and his theory of the migration of American Indians from Asia. He was the one of the first scientists to argue the Americans originated in Asia and came across the Bering Strait, and participated in numerous archeological expeditions which contributed a great amount of information and physical evidence.

“While the anthropologist is thus painfully and slowly reconstructing the past physical history of man, he is also with every new fact adding another imperishable block to the foundation upon which will stand not only the knowledge of the future in regard to man himself, but also the laws of his further physical development, and radically even those of his beliefs and his moral behavior. This is a part of the service of anthropology to humanity.”
– Ales Hrdlicka, The Most Ancient Skeletal Remains of Man (1914)

Youth and Immigration to the USA

Aleš Hrdlička was born with six siblings in Humpolec, Bohemia (today Czech Republic) to Maximilian and Koralina (Wagner) Hrdlička and given a baptismal name “Alois”, which he later changed into the more patriotic form “Aleš”. He was taught by his mother, Karolína Hrdličková, and skipped the primary level of school. The family immigrated to the U.S. in 1881, when he was only 13. After arrival, the promised job brought only a disappointment to his father who started working in a cigar factory along with teenage Alois, who attended evening courses to improve his English. In 1889 at the age of 18, he decided to study medicine at Eclectic Medical College since he had suffered from typhoid fever and experienced the treatment difficulties of those times.

To finish his medical studies, Hrdlička sat for exams in Baltimore in 1894 graduating with honors.He managed to receive a research position in the newly founded State Homeopathic Hospital for the Insane, at Middletown, New York. It was there that he developed his interest in anthropometry, the study of measuring the human body.[3] In 1896, Hrdlička left for Paris to study anthropology with Léonce P. Manouvrier at the Ecole de Medécine. Later that year he returned to the United States and became an associate in anthropology in the New York Pathological Institute.

Hrdlička remained at the Pathological Institute until 1899, when he was invited by Frederic Ward Putnam to join the Hyde Expeditions of the American Museum of Natural History as a “field anthropologist.” In this capacity Hrdlička conducted four intensive surveys among the Native Americans of the southwestern U.S. between 1898 and 1902.[2] In 1898 Aleš Hrdlička accompanied the Norwegian ethnologist Carl Lumholtz on his fourth and last expedition to the Tarahumara and the Huichol in Mexico. In 1910 he became curator of the physical anthropology collections at the Smithsonian Institution, having been assistant curator for the previous seven years.[1]

During his scientific travel across America, examining many of the sites where Pithecanthropus had been found, as well as the sites of various Paleolithic settlements, Hrdlička became the first scientist to spot and document the theory of human colonization of the American continent from east Asia only some 3,000 years ago. He argued that the Indians migrated across the Bering Strait from Asia, supporting this theory with detailed field research of skeletal remains as well as studies of the people in Mongolia, Tibet, Siberia, Alaska, and Aleutian Islands. The findings backed up the argument which later contributed to the theory of global origin of human species that was awarded by the Thomas Henry Huxley Award in 1927.

Map of early human migrations based on the Out of Africa theory.

The Neanderthal Phase of Man

Aleš Hrdlička founded and became the first curator of physical anthropology of the U.S. National Museum, now the Smithsonian Institution National Museum of Natural History in 1903. He was the founder of the American Journal of Physical Anthropology. In 1927 he published the first of his major theories in an article entitled “The Neanderthal Phase of Man,” in which he sought to prove that Homo sapiens had developed from Homo neanderthalensis and that all human races had a common origin.[1,8]

The Asia and Europe Hypothesis of Hominid Evolution

Hrdlička was a critic of hominid evolution as well as the Asia hypothesis, as he claimed there was little evidence to go on for those theories. He dismissed finds such as the Ramapithecus which were labeled as hominids by most scientists, instead believing that they were nothing more than fossil apes, unrelated to human ancestry. In a lecture on “The Origin of Man,” delivered for the American Association for the Advancement of Science, at Cincinnati, Ohio, Hrdlička said that the cradle of man is not in Central Asia but in Central Europe, as Europe is the earliest known location where human skeletal remains have been found. Hrdlička was almost alone in his views. The European hypothesis fell into decline and is now considered an obsolete scientific theory which has been replaced by the Multiregional hypothesis and the Out of Africa hypothesis.

In his books Physical Anthropology (1919), followed by Anthropometry (1920) and Old Americans (1925), Hrdlička claimed that the first Americans immigrated across the Bering Strait from the Asian continent. His proposal was based on the fact that in the Americas there were no apes from which man could evolve.[3] In 1927 Hrdlička began organizing expeditions to Alaska and the Bering Strait to support his theory that native Americans came from Asia across the Bering Strait. Among the numerous honors that he received was the naming of the Hrdlička Museum of Man in Prague after him.[1]