You are here: Home › aviation › Albrecht Berblinger, the Tailor of Ulm and His Flying Machine 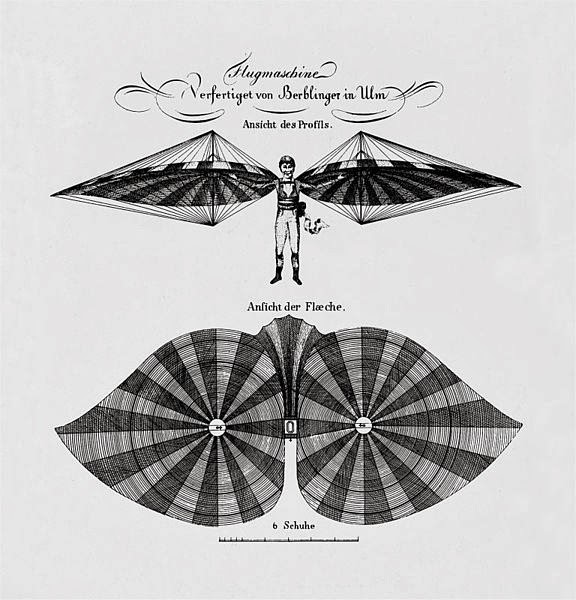 On May 31, 1811, Albrecht Ludwig Berblinger, also known as the Tailor of Ulm, failed to give the proof that his machine was able to fly and fell into the Danube river during the demonstration. He is famous for having constructed a working flying machine, presumably a hang glider.

Forced to Become a Tailor

Albrecht Berblinger was born as the seventh child of the servant Albrecht Ludwig Berblinger the Elder and his wife Anna Dorothea Fink in modest circumstances. Apparently already as a child he came into contact with all kinds of mechanical equipment through his father, who worked in the armory of the Free Imperial City of Ulm. He was just 13 when his father died and he came to the orphanage, where he was forced to start an apprenticeship as a tailor, although he would have preferred to become a watchmaker.

Building his own Wings

At the age of 21 he became a master tailor, but his real interest was still in mechanics. In addition to his work as a tailor, Berblinger was therefore also an inventor. He developed leg prostheses and a “foot machine” that could be inserted after foot amputations – the first leg prosthesis with joint (1808). When he noticed his increasing interest in human flight, Berblinger began observing owls and made first attempts to build his very own wings. For several years the curious inventor improved and reconstructed his glider, very much to the despise of his city. People mocked him. They threatened to throw him out of the guild and made him pay a heavy fine for his work outside the guild. Nevertheless, using all his income, he continued to build his aircraft.

He secretly carried out his flight experiments in the vineyards on the Michelsberg in Ulm. From today’s perspective, the southern position of the slope offers very favorable conditions for thermal updrafts. Also the vineyard walls and vineyard cottages there offered ideal possibilities as starting ramps. Frederick I of Württemberg showed interest in his efforts and proposed to support the inventor financially in case he was able to demonstrate the functionality of his glider. Originally, he intended to jump off the Ulm Minster’s roof, which was back then about 100 m high. However, Berblinger’s flying abilities were not trusted wherefore he was supposed to jump off a wall near the Donau river. To be able to cross the river completely, the 13 m wall was added by a 20 m scaffold.

The king’s departure on 31 May probably led to Berblinger’s departure on 30 May 1811. The king and many people from Ulm were waiting for his first flight demonstration, but Berblinger postponed his start until the next day. The historical descriptions suggest that he noticed the completely different wind conditions on this day and hoped for a change the next day. From today’s point of view it is clear why he could not feel the “flying force” he called under his wings. The relatively cold water of the Danube creates downwind, which is reinforced by the walls of the bastion. 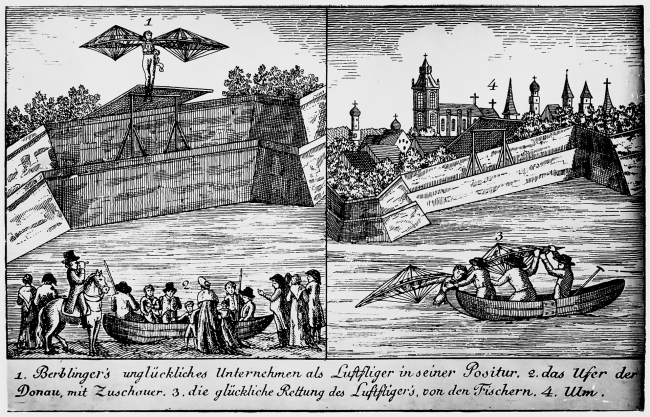 The flight attempt of the “tailor of Ulm” (contemporary representation).

On the following day, 31 May, he again took part in a public flight test. The king had already left, but his brother, Duke Henry, and the princes were watching. However, the wind conditions had not changed within a day. He must have become aware of this, because he delayed the start planned for 4 pm, with the hope that something could still change. Around 5 pm the numerous spectators and also Duke Henry became impatient and urged him to finally start his performance. An adjacent police servant finally bumped into Berblinger and the fate took its course.

Crash Landing in the Danube

From this moment of surprise he could not reach the required initial speed for the glide flight and could not align the wings of his aircraft at a favourable angle of attack. The downwind and the tail wind brought the dream of flying to an abrupt end. Standing fishermen rescued him from the Danube floods after the crash under the yelling of the many spectators. 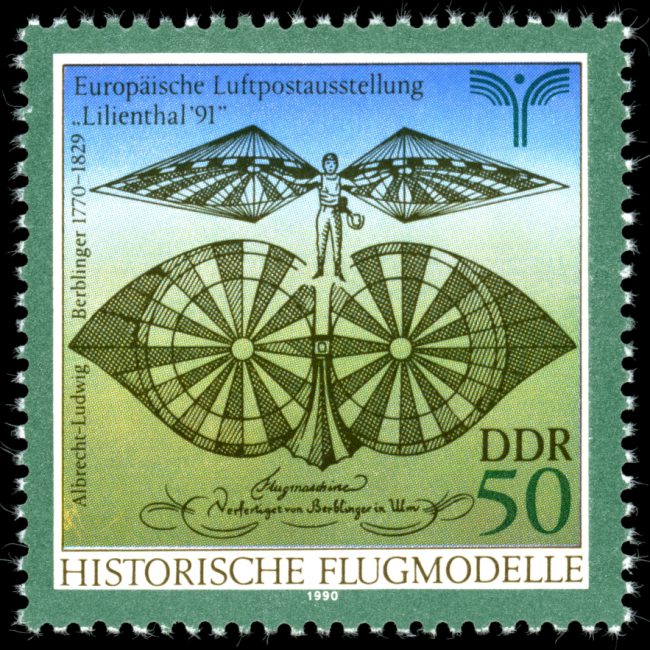 The crash with his flying machine was also associated with a social crash. He was now described as a liar and cheater, which meant that the customers of his tailor’s workshop also failed to appear. At the age of 58, he died in hospital, completely impoverished and destitute of emaciation. Berblinger’s flying machine was made of “Indian cane”, presumably bamboo, fell under the Continental Blockade and was burnt at a large pyre together with other English goods shortly afterwards under official supervision.

But, even though the city of Ulm did not really appreciate Albrecht Berblinger’s efforts during his lifetime, he was posthumously honored numerous times. However, it should take until the 1890s, until German flight pioneer Otto Lilienthal was able to demonstrate the flying capabilities of gliders.[4] And by the way, it was demonstrated in 1986, that Berblinger’s glider actually was able to fly, but the conditions at the Donau river are just too difficult, even for today’s modern gliders. In 1986, on the occasion of the 175th anniversary of the first flight attempt, the city of Ulm organized a flight competition to find out whether it would have been possible to cross the Danube at this point. A gliding flight is made very difficult by the falling winds prevailing on rivers. A glider modeled on the original crashed into the water after a few meters, as it had done at the time. As the only model of 30 launched, a hang glider, which was modern at the time and copied from hang gliders, made the distance. In the same year, it was proven on a mountain slope in Ulm that Berblinger’s glider was basically airworthy. A replica of the flying machine can be seen in the stairwell of the Ulm City Hall.