You are here: Home › mathematics › Walter Pitts and the Mathematical Model of a Neural Network 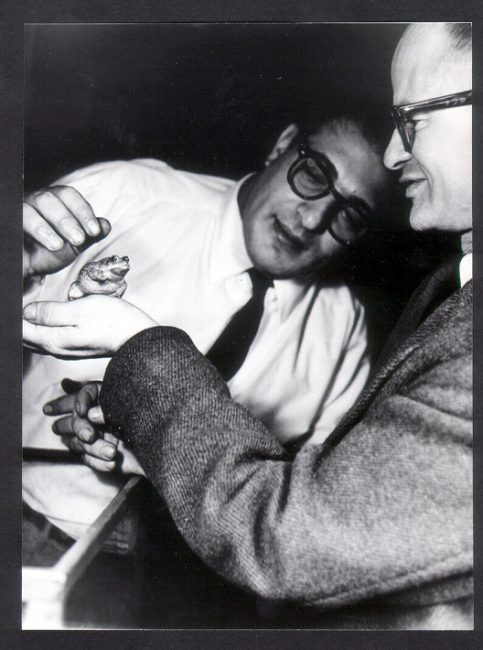 On April 23, 1923, American logician Walter Pitts, Jr. was born. Pitts worked in the field of computational neuroscience. He proposed landmark theoretical formulations of neural activity and generative processes that influenced diverse fields such as cognitive sciences and psychology, philosophy, neurosciences, computer science, artificial neural networks, cybernetics and artificial intelligence. Moreover, he proposed the first mathematical model of a neural network. The unit of this model, a simple formalized neuron, is still the standard of reference in the field of neural networks. It is often called a McCulloch–Pitts neuron.

Pitts was considered an eccentric genius when he began researching at the University of Chicago as a non-enrolled student who had run away from home at the age of 15 and a sidekick. He taught himself ancient Greek, Latin, Sanskrit and other languages as well as logic and mathematics on his own as a teenager. At 12 he read the Principia Mathematica by Bertrand Russell [1] and Alfred North Whitehead in the library and wrote a letter to Russell, which impressed him so much that he invited him to England and he attended Russell’s lectures in Chicago in 1938. Pitts also impressed the Chicago professor Rudolf Carnap after he had given him a note of his Logical Structure of the World.[2] Carnap then spent months trying in vain to find out who he was, as he had not imagined himself, and arranged a subordinate job for him at the university, but Pitts did not seek a degree as a student and never received a university degree.

How to Model a Brain

He became an associate of neurophysiologist and cyberneticist Warren McCulloch in Chicago, who took him into his home as he had no fixed accommodation at the time. This led to the classical work on early mathematical neuron models (A logical calculus of ideas immanent in nervous activity, 1943) and neural networks. The work influenced, among others, the mathematician and computer pioneer John von Neumann.[3] The research question both McCulloch and Pitts wanted to solve was whether the human brain also in theory is able really to compute so-called turing-computable functions. To this end they designed a mathematical model of a single biological neuron, the so-called McCulloch-Pitts neuron. Artificial neural networks consisting of McCulloch-Pitts cells can only use binary signals. Each individual neuron can only generate 1 or 0 as output. Analogous to biological neuronal networks, inhibitory signals can be processed. Each McCulloch-Pitts cell has any real number as threshold.  McCulloch and Pitts were able to show that Turing-calculable programs can be calculated by a finite network of such artificial neurons. This made both to founding fathers of neuroinformatics.

Model of an artificial neuron according to McCulloch and Pitts

McCulloch and his friend Jerome Lettwin (1920-2011), also a physician, placed Pitts in an assistant position with the mathematician Norbert Wiener of MIT in 1943.[4] He was given the post after the sceptical Viennese, who himself had previously been regarded as a mathematical prodigy, tested him by going through his proof of the ergod theorem with him on the blackboard. Pitts was accepted by Wiener as a doctoral student and he even provided him personally with a curriculum from various subjects ranging from mathematics to circuit theory and electronics. In 1944, Pitts was also hired by Kellex Corporation, a petrochemical company that also dealt with the processing of radioactive materials. From 1946, Pitts was a core member and involved with the Macy conferences, whose principal purpose was to set the foundations for a general science of the workings of the human mind.

A Pioneer in Cognitive Science

In 1952, together with McCulloch, Lettvin and Pat Wall, Pitts was part of the group hired by MIT Professor Jerome Wiesner at the Vienna Research Laboratory for Electronics on advice from Wiener to study the functioning of the nervous system. Within this group, which pioneered cognitive science, he was one of the leading minds with McCulloch, although he did not like to be mentioned in publications and rejected academic degrees and official university positions. His way of working was also unusual – he was often seen reading in a bar. He remained at MIT until his death, but was increasingly isolated after Wiener broke with McCulloch and all his associates, including Pitts, for private reasons (his wife did not like McCulloch).  In 1959, the paradigmatic “What the Frog’s Eye Tells the Frog’s Brain” (credited to Humberto Maturana, Lettvin, McCulloch and Pitts) conclusively demonstrated that “analog processes in the eye were doing at least part of the interpretive work” in image processing as opposed to “the brain computing information digital neuron by digital neuron using the exacting implement of mathematical logic“, leading Pitts to burn his unpublished doctoral dissertation and years of unpublished research.Pitts died in 1969 from bleeding esophageal varices, a common concomitant disease of cirrhosis of the liver. The theoretical foundations he formulated together with McCulloch were important for the development of neuroinformatics and cognitive sciences.