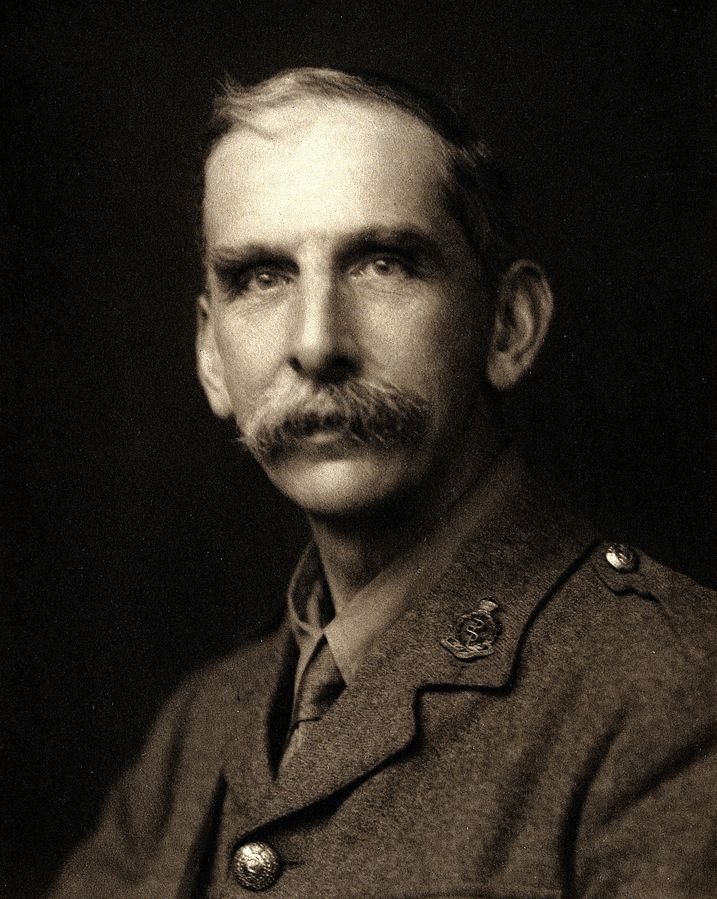 On April 14, 1857, English physiologist and neurosurgeon Sir Victor Horsley was born. Horsley was a pioneer in surgery on the brain and spinal cord. His best-known innovation is the Horsley–Clarke apparatus (developed together with Robert H. Clarke in 1908) for performing the so-called stereotactic neurosurgery, whereby a set of precise numerical coordinates are used to locate each brain structure.

Victor Horsley was born in Kensington, London, the son of Rosamund Haden and John Callcott Horsley R.A. His father, John Callcot Horsley, was a renowned London artist and member of the Royal Academy. Part of his father’s success resulted from him being an opponent of the pre-Raphaelites. He was able to achieve significant favour amongst the prudish middle-class Victorians for strongly opposing the use of nude models in his artistic work. Victor was bought up at his father’s country house near Cranbrook in Kent and attended the Elizabethan school in the same town. On leaving school he entered University College, London from where he qualified in 1881. On completion of his undergraduate studies he remained at his alma mater and was eventually elected as a consultant to University College Hospital and the National Hospital for the Paralysed and Epileptics, Queen Square.[4]

Victor Horsley became the first known physician to remove a spinal tumor. Further, he developed several neurosurgical techniques, which included the hemostatic bone wax, the skin flap, the ligation of the carotid artery to treat cerebral aneurysms, the transcranial approach to the pituitary gland and the intradural division of the trigeminal nerve root for the surgical treatment of trigeminal neuralgia.

However, he was probably most famous for his achievements in neuroscience. Horsley carried out studies of the functions of the brain in animals and humans, particularly on the cerebral cortex. He significantly advanced the field by studying motor response to faradic electrical stimulation of the cerebral cortex, internal capsule, and spinal cord. It is further assumed that Victor Horsley first used intraoperative electrical stimulation of the cortex for the localization of epileptic foci in humans, preceding Fedor Krause and Wilder Penfield. In 1884, Horsley was appointed to the Brown Institution of the University of London where he performed extensive experiments on the localisation of brain function. In 1884, he was able to demonstrate that thyroidectomy caused myxoedema.He studied pituitary function and in 1886 performed the first successful experimental hypophysectomy.  In 1887, he was the first to remove an extradural tumour from the spinal column with complete recovery of the paraplegic patient.[4]

His best-known innovation is the Horsley–Clarke apparatus, which he developed together with Robert H. Clarke in 1908. The device was invented for performing the so-called stereotactic neurosurgery, whereby a set of precise numerical coordinates are used to locate each brain structure. He became active in the temperance movement against the consumption of alcoholic beverages. He later became vice-president of the National Temperance League and the president of the British Medical Temperance Association and also published a book on alcoholism called Alcohol and the Human Body.

Appointed in 1886 as secretary to a governmental commission formed to study the anti-rabies vaccine developed by Louis Pasteur, Sir Victor Horsley corroborated his results and created a campaign to vaccine against rabies in the United Kingdom.[3] As a pathologist, Horsley carried out research on bacteria and founded the Journal of Pathology.

In 1886 he was elected a Fellow of the Royal Society and delivered their Croonian Lecture 1891, jointly with his brother-in-law Francis Gotch, on the subject of the mammalian nervous system. In 1894 he won their Royal Medal for his investigations relating to the physiology of the nervous system, and of the thyroid gland, and to their applications to the treatment of disease. Apart from his professional activities he was keenly interested in sociology and politics and strongly supported women’s suffrage.  He retired early from surgical practice to pursue his political ambitions.  He was a fierce opponent of the use of tobacco and alcohol.  He believed that ingestion of alcohol rather than the sun per se caused heat-stroke.[4]

On the outbreak of the First World War, he requested for active duty on the Western Front where he was initially sent as surgeon at the British hospital at Wimereux, France. He was next posted in May 1915 as a colonel and Director of Surgery of the British Army Medical Service in Egypt, based at the 21st General Hospital in Alexandria, in support of the Dardanelles Campaign. In the following year he volunteered for field surgery duty in Mesopotamia, where he died unexpectedly in Amarah, Iraq, on 16 July 1916, of heatstroke and severe hyperpyrexia, at only 59 years of age.